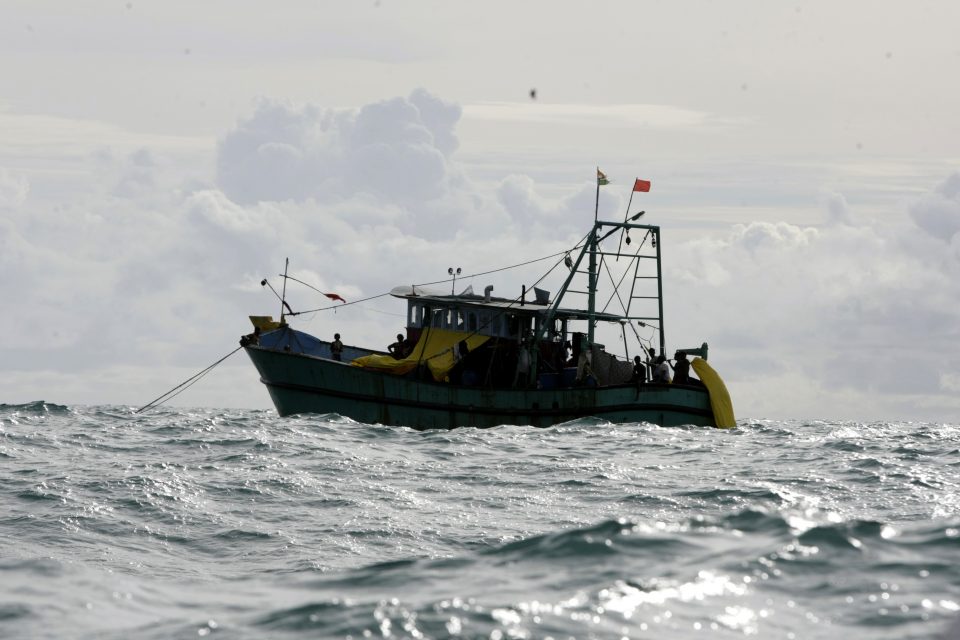 The ship was not allowed to land for hours and even when it was, it was only for the migrants to be put on another boat back to Lebanon (File photo)

For the dozens of Lebanese men, women and children who crammed onto at least six boats this past week hoping to find a new life in Cyprus, the government here first expressed sympathy for their plight – and then promptly escorted them home.

And that policy will not change, the government insisted this week. It said the Lebanese are economic migrants, not refugees, and Cyprus – already struggling to deal with an existing influx of asylum seekers – is not obliged to take them in.

For Mohamad Khanji from Tripoli it has been a traumatic lesson to learn. After paying more than US$500, on September 5 he joined another 20 people, squeezed into an eight-metre long boat built to hold a dozen, and endured a 40 hour round trip journey in sweltering heat, all for nothing.

“I was promised a better life, a better future, but I almost got death,” the 37-year-old told the Cyprus Mail this week, his voice breaking.

“I wanted to save my family from hunger, so I thought I could travel to Cyprus as a refugee and then perhaps find a job. Any job! Just something that can help me sustain my family,” said Khanji, a father of a new-born baby girl and a three-year-old son.

Like the others he took the decision to leave after the deadly explosion at Beirut port on August 4 which killed about 190 people, injured 6,000 and left about 300,000 people without inhabitable homes. The explosion came on top of a deep economic crisis that has posed the biggest threat to Lebanon’s stability since its 1975-1990 civil war.

He refused to disclose the names of the people behind the illegal boat trip, but he admitted that it was carefully planned.

“I had heard of ongoing plans for a trip to Cyprus for those seeking asylum from Lebanon. Many people were talking about it in Al-Mina neighbourhood, Tripoli. I decided to inquire about it.”

The people “running the show “asked Khanji to pay four million Lebanese pounds (roughly $540 US). “I had to borrow the money from a few friends. I regret it, I wish I had given the money to my family. Not only were we unable to access Cyprus as refugees. The trip was a living hell!”

Khanji, speaking to the Cyprus Mail just after he arrived back in Lebanon escorted by a Cypriot marine vessel, described the days of “terror” he spent at sea.

“We left Lebanon at 6pm on Saturday, September 5, 21 people squeezed in a wooden boat that would normally fit 10-13 people at the most. On board were five kids, one of them was autistic and suffered a lot,” he said.

“We had food and water provisions that were only enough for a 24-hour trip. The trip lasted 40 hours, and we went through hell under a burning sun without food or water.”

Even worse for the 21 migrants was the heatwave that struck the region from Friday, September 4 until Sunday, September 6 when temperatures topped 35 degree Celsius.

“We faced strong currents on a fragile boat. I believed I was going to die. I cried hard as I thought that I will never again get to see my children, my wife, and my mother. I was terrified,” he admitted.

The boat reached Cyprus at 6pm on Monday.

“We were not allowed to land. The Cypriot marines kept us at sea overnight at close proximity to the shore. The next day we were allowed to land. They offered us water and food and immediately escorted us to a boat that carried us back to Lebanon,” Khanji said.

“I will never do it again, I almost lost my life at sea.”

But there is one thing about the whole debacle that has left Khanji confused.

“Why are the Cypriot authorities receiving Syrian refugees and sending the Lebanese away?”

The answer came from Cypriot ambassador to Lebanon, Panicos Kyriacou, who has kept a close eye on events and his hand on the phone, remaining in touch with both the Cypriot and Lebanese authorities to insure the safe return of the migrants to Lebanon.

“Generally speaking, the status of refugee is granted to people who need protection from war and violence occurring in their country of origin. In the case of the Lebanese people they are economic refugees. We are unable to receive them,” he told the Cyprus Mail in a telephone interview.

“If people are looking for jobs and opportunities, unfortunately Cyprus is not the right address. The island these days has its own struggles. After the corona crisis the tourism sector has suffered great losses. Even Cypriots themselves are having a hard time finding a job.”

But a main question remains: how did Khanji’s boat get past the Lebanese navy?

Rabbits island is located 5.5 kilometres offshore to the west of Tripoli in northern Lebanon. Uninhabited, it is part of the Palm Islands nature reserve. Tourists and locals usually visit it for a day trip. “This island was used as a departure platform for the illegal boat,” said Khanji.

“We were taken there on a Saturday, so we would not seem suspicious and we remained there until all the boats returned to shore. At 4pm the boat picked us up and we mingled with the local fishermen boats until we slowly made it out from the area.”

“Rabbits Island has been used recently to smuggle people out of the country. It makes it hard for the radar to single out one fishing boat among many others in the area,” a Lebanese security source confirmed to the Cyprus Mail.

“We have succeeded in intercepting 10 boats at least last month carrying 20-45 people each in a small fishing boat that usually fits 10 people without any security measures.”

He said that the migrant’s boat goes undercover in the area where a lot of fishermen are stationed offshore as this makes it hard to identify them on the radar.

But this is not everything, the smugglers have come up with an extra scheme to bypass Lebanese security forces.

As a country that relies heavily on imports, Lebanon’s maritime space is always filled with cargo ships.

“The smugglers rely on the movement of cargo ships that are leaving Lebanon for the open seas. They slowly move out from the pack of fishing ships and find refuge behind the cargo ship. On a radar screen, that wouldn’t look suspicious and one might think that the small boat is related to the cargo ship itself,” the security source told the Cyprus Mail.

The Cypriot ambassador said he was confident the attempts to reach Cyprus will eventually stop.

“People will know that the possibility of remaining in Cyprus is not an option. And the cooperation between the Cypriot and Lebanese authorities to return the migrants to Lebanon will send out a message for people that there is no point in taking risks at sea “

But as the situation in Lebanon gets worse day by day, it seems unlikely that the desperate ones will pull back from attempting anything to save themselves from hunger.

Our View: Securing sanctions against Turkey has become an end in itself

32 new coronavirus cases in the north