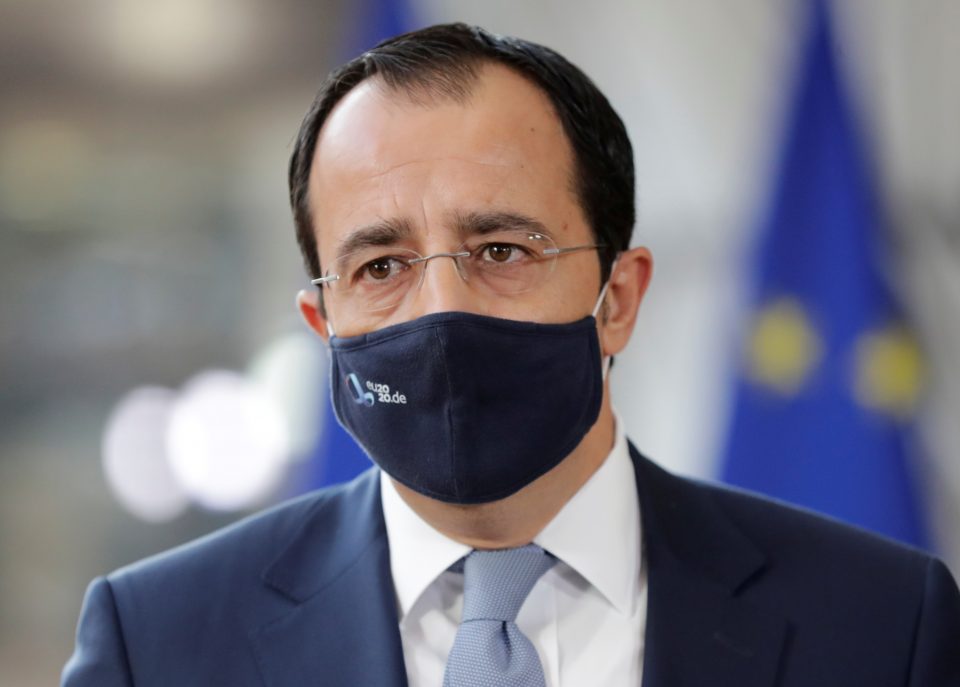 Little Nik getting aggresive at the Foreign Affairs Council

THIS WEEK when our Foreign Minister Nicos Chirstodoulides was playing hard-ball over sanctions at the EU foreign affairs council I was reminded of the wonderful remark by Hungarian-born satirist George Mikes that Cyprus, having realised it would not be a world power, decided to become a world nuisance.

Although we may have failed to sustain our world nuisance status, we have established it quite forcefully at EU level ever since the Union accepted us into the bloc, a decision leading members have regretted on countless occasions in the last 16 years.

Christodoulides gave them an opportunity to do so again on Monday when he gave an admirable demonstration of our nuisance value by preventing the council taking a decision on sanctions against Belarus, a move that was supported by the foreign ministers of all other countries including our close allies Greece and France.

Still we blocked the decision on Belarus, which was probably welcomed by our non-EU allies of the East, showing the “German axis” that what we lack in conventional power we more than make up with our nuisance capability.

BACK ON the heatwave isle, which one radio presenter last Monday claimed was entering autumn because the temperature had fallen to 35 degrees, our entire political establishment perched on the moral high ground expressing its disgust with the double standards and hypocrisy of the EU.

There is nothing more entertaining than hearing our self-serving politicians that often exhibit many more than just double standards giving lessons about the values and ideals of the EU, which all European states except principled Kyproulla had betrayed. We may be a nuisance country but we uphold the EU’s core values more faithfully than any other member-state.

After appeasement, Christodoulides came up with another memorable phrase to expose the Europeans hypocrisy – a la carte. “Our response to any kind of violation of our core, basic values and principles cannot be a la carte, it must be consistent,” he declared self-righteously after the meeting.

But if it were an all-you-can-eat buffet, what was the guarantee that the German axis would have allowed sanctions against Turkey to be one of the dishes?

MANY of those who disapproved of our stance blamed it on Christodoulides, arguing that he was building his presidential profile by showing assertiveness and standing up to the Europeans. One Phil columnist argued that little Nicos, who could be a potential presidential candidate in 2023, was being attacked by rivals because he had gained public acceptance.

I disagree. Little Nicos shies away from any type of confrontation. Unlike his boss, who has Fuhrer qualities, the guy is terrified of conflict, which is why he has never rowed with anyone and always tries to agree with anyone he is talking to. He was government spokesman for almost five years and not once had he rowed with another politician or journalist.

So it is impossible that he would have opted to stand up to the foreign ministers of powerful countries of his own accord. He was acting on orders from Big Nik, whose agenda is to kill any chance of a resumption of Cyprob talks because he knows this time he will not be able to slip away as he had done at Crans-Montana.

Securing EU sanctions against Turkey would piss off Erdogan so much he would not only veto a return to talks but would probably send the Yavuz for exploratory drilling in Limassol marina.

ACHIEVING a two-state solution by default is Prez Nik’s objective, which also explained his fiery speech to the UN General Assembly on Thursday, an all-out attack on Turkey, much of it justified, but not what you would expect from someone that has the slightest bit of interest in the resumption of talks.

Would any sane person sincerely committed to a settlement seek to punish the country that he will be negotiating with for this settlement? Nik wants to lead us to the two-state solution as a result of Turkish intransigence, through no fault of his own, which is why he acts and talks like Tass the Second.

No settlement, thanks to our Prez’s tough patriotic stance, would pave the way for a third term which is most definitely on the cards. And little Nikos will have to wait until 2028 to realise his presidential ambition, but he is young and in no hurry.

ONE TELL-TALE sign that Nik has set his sights on a third term is the announcement the state will advertise 700 positions in the public sector. Only someone seeking a third term would be so reckless as to burden the public payroll with the wages of 700 more parasites at a time when the public debt is at 120 per cent of GDP, the state is spending hundreds of million of euro to protect jobs and the economy is set to contract by at least seven per cent. This is straight out of the comrade Tof school of economic thought.

The foreign ministry wants funding for nine senior positions for the proper staffing of the diplomatic service “because of the many and open fronts faced by the Republic in foreign relations, particularly with the stepping up of Turkish provocativeness in the eastern Mediterranean.” First we had the Cyprob to justify overstaffing the foreign ministry now we have Turkish provocativeness.

Will these nine appointees be put on boats to patrol our EEZ or will they step up our nuisance diplomacy on the many open fronts?

THIS WEEK we found out what the biggest problem facing public education is. It is not low literacy level, it is not disappointing results in pancyprian exams, it is not teachers disinterested in their job, it is not the failure to encourage critical thinking. It is lack air conditioning in the classroom.

This big problem has been discussed more than anything else related to public education this year. Last week the House education committee invited a host of experts to discuss the number one issue facing public education. Before that education minister PP had repeated meetings with parents about the lack of ACs in classrooms, promising that the government would find solutions.

You have to give credit to the teaching unions, which are masters in diversionary tactics. They were the ones that had been complaining about the lack of ACs so as to put off discussions with the ministry about an evaluation system for teachers. Now that they want to deflect attention away from their indefensible refusal to participate in online teaching they have once again brought up the AC issue.

What is worse is that they persuade the idiots running the parents associations that the ACs are the most important issue facing public education – not the refusal of lazy teachers to teach online on the ludicrous pretext that this was a violation of personal data. It is not considered a violation in any other country of the EU, not even Greece.

It must be because of their double standards. Once again we are flying the flag of the core values and principles of the EU.

THE GENERAL manager of the Larnaca and Famagusta general hospitals Giorgos Karotsakis was on Trito radio on Saturday morning firing broadsides against Okypy, the state health service, accusing it of incompetence, mismanagement and alleging financial irregularities. He demanded the attorney-general and (of course) the auditor-general carried out investigations of Okypy’s finances.

What Karotsakis failed to say was that his 18-month job contract had expired and because Okypy had not intended to renew it, he joined Pasydy so he could be anointed a public employee and hold on to his highly-paid post. As we all know, public employees cannot be sacked for poor performance or incompetence.

RETURNING to the theme of hypocrisy and double standards, Oscar Wilde once remarked that British newspapers had scathing reports against gambling on their front pages while on their sports-pages they published the horse racing cards and betting odds. I was reminded of this last Monday when Haravghi published an indignant front-page article protesting about the banks resuming foreclosure procedures against debt defaulters. Inside the same paper, there were two pages of advertisements of auctions of repossessed properties. These are very difficult times for newspapers so a bit of hypocrisy is perfectly understandable.

Rating agency approval must not lead to complacency