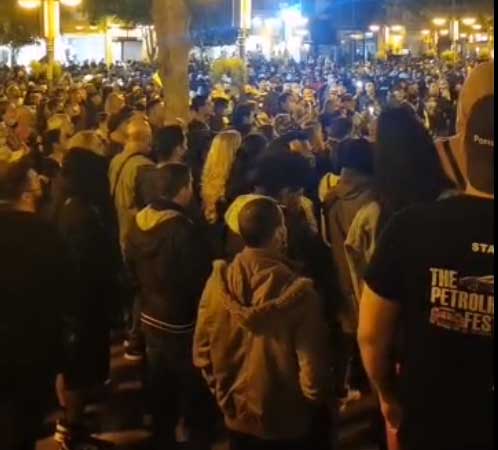 Hundreds of people gathered on Saturday evening outside the Limassol district administration office to protest the latest restrictive measures against the spread of coronavirus and also corruption.

The protest on Anexartisias street started at 6pm.

Hundreds of people gathered chanting slogans against parliament, corruption, the obligatory use of masks and the €300-fines given to people accused of violating the imposed measures.

A group of people from Nicosia had made their way to Limassol to join the protest but said they were not allowed in by the police emergency response unit (Mmad).

No entry is allowed into the districts of Limassol and Paphos, until November 30, as part of the latest restrictive measures against the spread of coronavirus.

People who took the microphone shouted against the impunity enjoyed by politicians and their families, while at the same time people struggling to get by are being punished with steep fines for not wearing a mask.

Organisers said they would be out on the streets protesting “for our lost dignity, for our honest sweat, for our parents’ struggles, for the future of our children”.

They called on people to join them in their struggle against corruption until those who have turned Cyprus into the “sewer of the Mediterranean” have stood trial.

The protest dispersed at around 8pm – the time curfew now comes into effect in Limassol – but some protestors set trash cans on fire and hurled firecrackers prompting police to intervene.