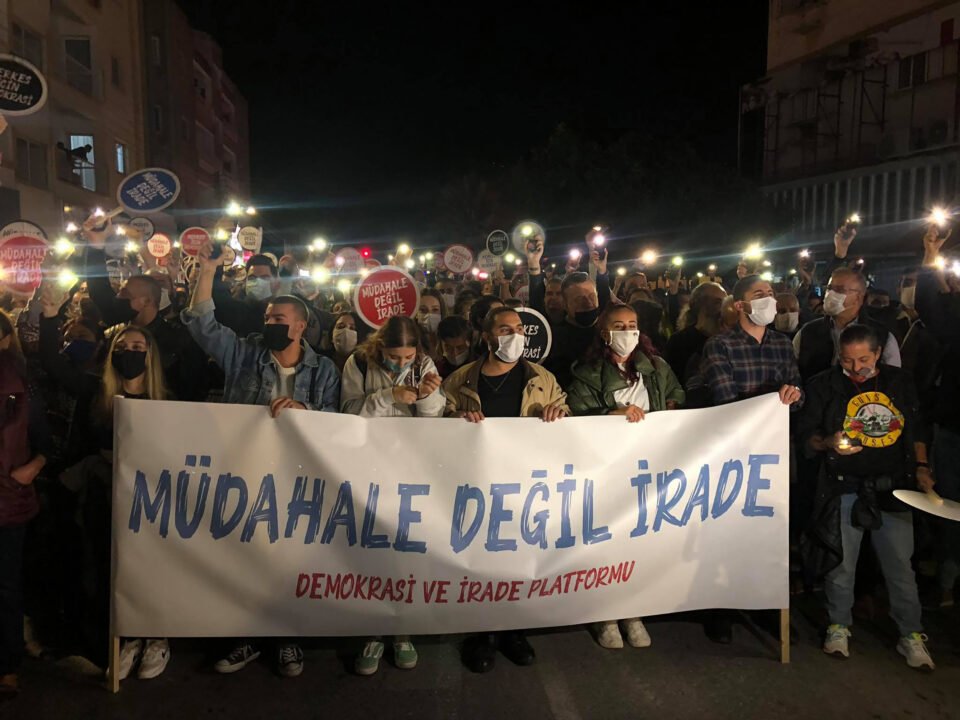 The demonstration in northern Nicosia on Tuesday night

The solution to the Cyprus problem was always there, ‘outside the box’

Three to four thousand Turkish Cypriots demonstrated last Tuesday evening with slogans such as, ‘Cyprus is and will remain secular’, ‘The last word in Cyprus belongs to the Cypriots’, ‘Ankara, take your hands off Cyprus.’ What is interesting is that these sentiments were publicly voiced, even though the Turkish Cypriot community entirely depends on Turkey for its economic survival.

The choices made by the Turkish Cypriots have manifested themselves not only through the recent demonstration. They were vividly highlighted by the recent Turkish Cypriot leadership elections. Despite the pressure exerted and the inducements offered by Turkey, at least half of the voters were in favour of living together with the Greek Cypriots within the framework of a federation. And all this, despite the bitterness felt by many Turkish Cypriots because of the impression they have that the Greek Cypriot leadership is responsible for the continued failure to reunify Cyprus.

It is true that a – fortunately – small minority of Greek Cypriots support the idea of economically isolating the Turkish Cypriots so that they are forced to come kneeling and begging to the Greek Cypriots for any solution that would secure their survival. They support the hermetic closure of the crossing points and of prohibiting any kind of a transaction between those residing in the north and those in the south. These people ignore the voices of our Turkish Cypriot compatriots who underline that Cyprus is under the occupation of a foreign power, which seeks to impose her own views and to serve her own interests in northern Cyprus.

In the face of all this, what has the government of the Republic – which has an obligation to look after all its citizens – done? The answer is ‘nothing’.  In fact, not only has it done absolutely nothing, but it has also exerted every possible effort to isolate the Turkish Cypriots and to render them entirely dependent on Turkey.

These thoughts lead me to the conclusion that it is truly impressive that so many Turkish Cypriots continue to seek coexistence with the Greek Cypriots as long as their safety and dignity are adequately protected.

Although late, there is still a last chance for the government of the Republic to get things back on track. It can do so by taking the following steps:

It is true that for such an effort to have a reasonable chance of success, it is essential to ensure that northern Cyprus is liberated from the suffocating political and economic embrace of Turkey, a goal sought after by Turkish Cypriots, as they have courageously stated in their recent demonstration.

It follows that there is an urgent need for the Cyprus state to formulate (ideally with the participation of Turkish Cypriots) a comprehensive proposal for the future. Most people are not interested in the legalistic constitutional details, on which the ‘negotiators’ of both sides are invariably consumed. This inevitably leads to a miserable bargaining process ‘you should give me this, in return for me giving you that’. What is missing is a big, imaginative vision for the future – a framework within which all Cypriots will have a fair chance of living, with their children and grandchildren, in a happy, prosperous and secure environment.

However, I am tempted to ask the following question: all these years, was it so difficult to identify some competent Turkish Cypriots who could participate in the administration of the Cypriot state? Unfortunately, this question has never been answered. I suspect that this is because the answer to the question was to be found ‘outside the box’, while we were looking for the answer ‘inside the box’.

The word allowance I have leaves room for a quick comment on the current efforts of our MPs to “patch up” the legislation concerning the capital (wealth) statements of politically exposed persons. In my mind, there is absolutely no doubt that this attempt will have the same fate as those of the past because neither Zacharias Zachariou nor Georgios Perdikis have the necessary technical competence to manage such a subject, and it would be irresponsible on their part to attempt it.

It is also because our MPs continue to remain silent when confronted with the question of why for so many years, they were willing to put up with the unbelievable mess that has prevailed in connection with the capital statements of the politically exposed persons. I am a certified public accountant with 40 years of experience, and I warned them in 2017 and in 2019, in a specific, explicit and clear manner, that the prospects of the law serving its purpose were literally zero.

If our MPs genuinely wish to pursue catharsis, they must afford the opportunity to those who know what it is all about to effect the necessary extensive changes to the useless legislation currently in-force. This must be done with particular diligence and care, in the very near future, but the truth is that we have run out of time.

Being home by 11pm isn’t all bad