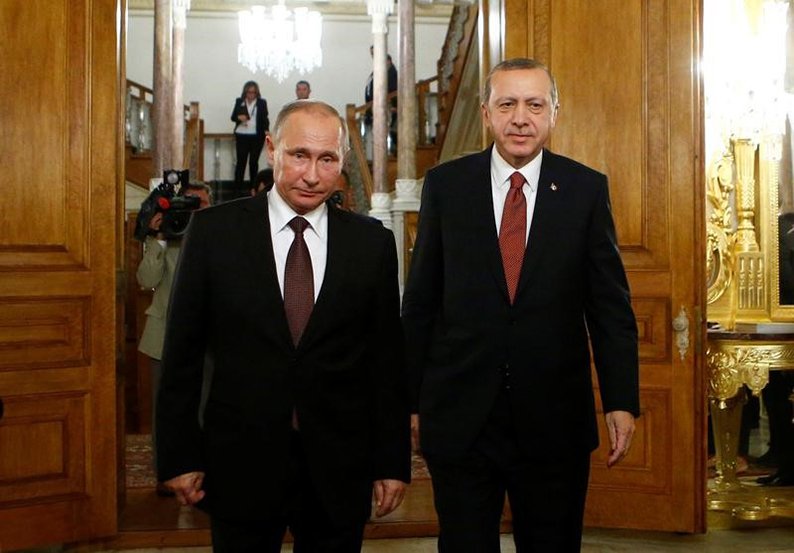 So far the end-game in Syria has played out in an entirely predictable way. All of Aleppo is back in the Syrian government’s hands, that decisive victory for President Bashar al-Assad and his Russian backers has been followed by a ceasefire, and the Russians are now organising a peace conference in Astana, Kazakhstan for later this month.

The one surprise is that Turkey, long the rebels’ most important supporter, will be co-chairing the conference. This means that Turkey’s President Recep Tayyip Erdogan has made a deal of some sort with Russia’s President Vladimir Putin, for Astana is clearly going to be a Russian show. (The United States has not been invited, and Saudi Arabia probably won’t be asked to attend either.)

So what kind of deal has Erdogan made with Putin? The details may well have been fudged, for Turkey has not yet renounced its long-standing insistence that Assad must step down as the Syrian leader. But it’s pretty easy to figure out most of what is going to be on the table in Astana (assuming the ceasefire holds until then).

Assad has won the war, thanks largely to Russian and Iranian intervention, and the Syrian rebels are doomed. There is no point in their fighting on, because ALL their outside supporters are peeling away. Turkey is now cooperating with Russia, in three weeks Donald Trump will be US president and also cooperating with Moscow, and Saudi Arabia is hopelessly over-committed to its futile war in Yemen.

Even little Qatar, once one of the main paymasters of the Syrian rebellion, has now lost interest: it recently signed an $11.5 billion deal for a 19.5% stake in Rosneft, Russia’s largest oil producer. The rebels are completely on their own, and their only options are surrender or dying in the last ditch.

Syria’s rebels are almost all Islamists of one sort or another by now, but the less extreme ones will probably be offered an amnesty at Astana in return for signing a peace deal – which may contain some vague language about an election that MIGHT replace Assad at some point in the indefinite future. That’s as much as will be on offer, because Assad does not intend to quit and Moscow will not force him to.

The ex-Nusra Front  (now renamed the Front for the Conquest of the Levant to disguise its membership in al-Qaeda) was refreshingly frank in condemning the ceasefire and the peace talks: “We did not negotiate a ceasefire with anyone. The solution is to topple the regime through military action,” it said. A political solution would be “a waste of blood and revolution.”

But a military victory over Assad is no longer possible, so these groups are destined to lose on the battlefield and revert to mere terrorism. In terms of what a post-civil war Syria will look like, the great unanswered question is: what happens to the Syrian Kurds?

They are only one-tenth of the Syrian population, but they now control almost all the Kurdish-majority areas across northern Syria. As America’s only ally on the ground in Syria, they have played a major role in driving back Islamic State. They are not Islamists, they are not terrorists, and they have avoided any military confrontation with Turkey despite President Erdogan’s war on his country’s own Kurdish minority.

Yet Erdogan publicly identifies the Syrian Kurds as Turkey’s enemy, and they have not (or at least not yet) been invited to the Astana peace conference. Was Erdogan’s price for switching sides a free hand in destroying Rojava, the proto-state created by the Syrian Kurds? Very probably, yes.

Assad would be content for that to happen, provided Turkey handed over the corpse afterwards. Putin doesn’t care one way or the other, and it’s most unlikely that Trump does either. The Turkish army will have its hands full fighting the Syrian Kurds, but it has the numbers and the firepower to prevail in the end.

So even if the current ceasefire holds, and even if the peace conference at Astana goes exactly according to Moscow’s plan, there is still some fighting to be done in Syria. Assad’s army, with Russian and Iranian support, will have to suppress both Islamic State and the former Nusra Front, and the Turks will have to subjugate the Syrian Kurds.

This will take time, but with no more weapons and money flowing in from outside (since Turkey has turned off the taps) it will probably happen in the end. Which means that Assad will probably one day rule once again over a united Syria.

That is a deeply discouraging prospect, but it is probably the least bad option that remains.

Objection to the imposition of transfer fees

Reading news in the age of Trump? Think like a spy.

Passport scandal, the innocent go down with the guilty

Proper use of EU funds crucial to recovery