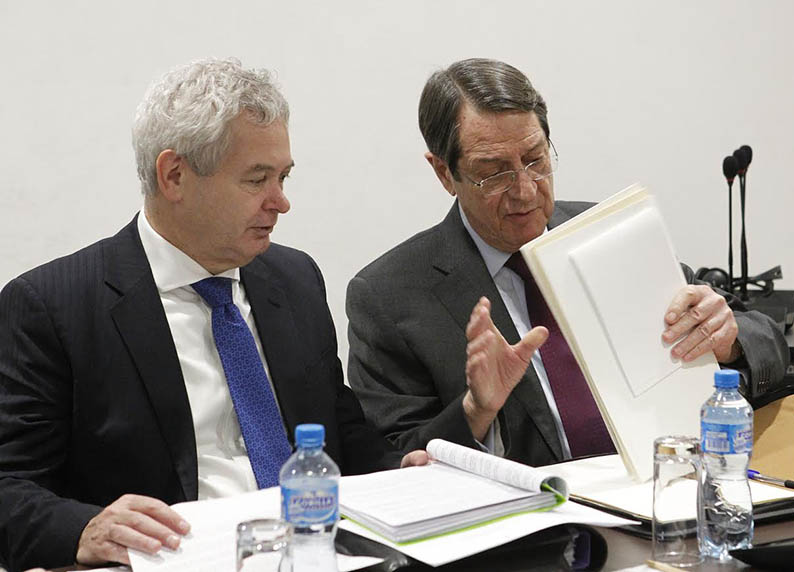 President Nicos Anastasiades on Tuesday expressed dissatisfaction with the leaking of a confidential talks-related document, announcing that no more documents would be circulated to party leaders in Geneva.

The president’s decision, conveyed by government spokesman Nicos Christodoulides, came after the leaking of a confidential document, either late on Monday evening or early Tuesday.

Its contents were published on Sigmalive website on Tuesday morning. The document cites the differences between the two sides on the chapters of property and governance.

It had been circulated to the party leaders accompanying the president in Geneva.

“It is distressing that such a climate should be created via leaks and various punch-lines, at a time when the president is waging a difficult battle,” the spokesman told reporters.

The president, he added, would continue deliberating with and informing the parties, but no more documents would be provided.

Not 24 hours earlier, Anastasiades and Turkish Cypriot leader Mustafa Akinci were holding their first negotiations in Switzerland. The two leaders discussed the property issue, had a short discussion on governance, and a brainstorming session on security and guarantees.

Later on Monday, Anastasiades had informed the members of the National Council who accompanied him about the first day of his negotiations.

It’s understood the leaked document dates back to November, with the issues now being revisited.

Although a number of the listed disagreements were common knowledge, Anastasiades was said to be furious with the leak.

The document published by Sigmalive cited 24 differences between the two sides, 10 relating to governance and 14 to property.

Chief among them is the Turkish Cypriots’ insistence on a rotating presidency – a position rejected outright by Anastasiades and his team.

On a property-related issue, the Greek Cypriot side desires the automatic return of refugees in the emergent Greek Cypriot constituent state, whereas the Turkish Cypriots are seeking limitations.

Speaking from Geneva, one by one the party leaders denounced the leak.

Ruling Disy’s Averof Neophytou said it was “damaging to our cause.”

“No one has the right to exploit these crucial moments or our people’s anxiety for a positive outcome in order to play PR games,” he added.

Akel leader Andros Kyprianou opined that the incident did no favours to the Greek Cypriot side’s credibility with the United Nations.

Giorgos Lillikas, head of the Citizens Alliance, suggested the leak would backfire, as it might give the president the pretext to stop informing party leaders altogether.

While also lambasting the episode, Edek’s Marinos Sizopoulos said they should not get sidetracked but should stay focused on the substance, which are the negotiations.

As of late Tuesday afternoon, Diko chief Nicolas Papadopoulos had not commented.

Speaking to Mega channel, the Greens’ George Perdikis complained that the party leaders in Geneva were largely being left in the dark.

The leak, though reprehensible, should not be used as an excuse by the president’s team to refuse to hand over documents, he said.

The document in question had been given to party leaders on Sunday, Perdikis said.

“If we wanted to leak it, we could have done this from day one. The fact it was leaked 48 hours later is no accident.”

And to nip in the bud any speculation as to his own culpability, he reproduced on his Twitter account a statement by Pantelis Pantelides, the secretary of the National Council, saying that it was not Perdikis who outed the document.

Whatever the source of the leak, party leaders have been unable to keep away from social media while in Geneva.

Earlier, in the midst of the negotiations on Monday, Perdikis was tweeting:

Disy’s Neophytou hit back: “This has no basis in reality. Unacceptable. We are here to help, not undermine the national effort.”