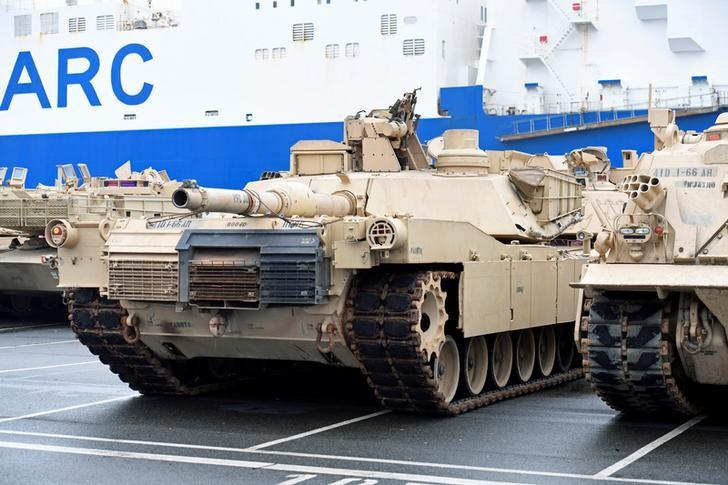 U.S. tanks, trucks and other military equipment, which arrived by ship, are unloaded in the harbour of Bremerhaven, Germany January 8, 2017. REUTERS/Fabian Bimmer

Has Europe been infantilised? Is it now less capable than other regions or nations of determining its future with the force and strength required to preserve the coherent governance and relatively high standards of living that it’s shown since the last war? That war, devastating as it was, seemed to teach a series of lessons on how to avoid more war, grow economies and remain a centre – even, the centre – of world power

Were the lessons wrong? Here are some reasons for asking the question.

For most of the post-war period, the states of Europe, both the majority within the European Union and the few which have remained outside, have been covered by a security umbrella held over our heads by the United States. Earlier this week, a US armoured brigade disembarked in the northern German port of Bremerhaven: it will base itself in Poland, and spread out eastwards next month to the Baltics, Romania and Bulgaria. The tiny Baltic states – Estonia, Latvia and Lithuania – border Russia; the coasts of Romania and Bulgaria are on the Black Sea, which Russia controls.

“Let me be clear,” said US Air Force Lieutenant General Tim Ray, deputy commander of the US European Command, as the tanks clanked on to Bremerhaven’s streets. “This is one part of our efforts to deter Russian aggression, ensure the territorial integrity of our allies and maintain a Europe that is whole, free, prosperous, and at peace”. For decades, Europe’s instinct has been to send for the US cavalry, once threatened. And the US instinct has been to send them: it has, said General Ray, a “rock solid commitment to Europe”.

The United States, at first reluctantly, has since the 1940s taken on the responsibilities of a hegemonic power with increasing enthusiasm: nowhere has that posture been more “‘rock solid”’ than in Europe. The Europeans have done their part – most (not all) are members of NATO, and contribute to its force levels. But most – including the major states of France, Germany and Italy – pay less than the agreed 2 per cent of GDP on defence: the United States put in $650 billion in 2015, 3.61 per cent of GDP. The Europeans are not free riders, but they are easy riders. The ride has suddenly become rougher.

Europe, with Britain (2.21 per cent of GDP spent on defence in 2015) as a partial exception, developed a worldview in keeping with its modest defence spending. It was a “post modern” view, one which transcended both the nation state and the multinational empires of the 19th and early 20th century – the last of these, the Soviet Empire, collapsing in the 1980s, seeming to put a last full stop to an era.

Most European politicians, and US liberals, endorsed the coming of the new era: the most active and subtle ideologist of the view was the British diplomat-cum-intellectual Robert Cooper, an adviser both to Tony Blair and to the European Union’s foreign policy chief (1999-2009), Javier Solana. In an influential essay in 2002, Cooper wrote that the main features of the post modern state were “breaking down of the distinction between domestic and foreign affairs; mutual interference in (traditional) domestic affairs and mutual surveillance; the rejection of force for resolving disputes; the growing irrelevance of borders; and security… based on transparency, mutual openness, interdependence and mutual vulnerability”.

When US Secretary of State John Kerry condemned Russia’s aggression in Ukraine in 2014, he said that “You just don’t in the 21st century behave in 19th century fashion by invading another country on completely trumped up pretext” – an echo of Cooper’s “rejection of force”. Yet it now sounds like the last blast of the trumpets of a defeated army: Russia, hardened by life in a tough geopolitical neighbourhood, did invade Ukraine, on the pretext – not, in President Vladimir Putin’s mind in the least “trumped up” – that it is inseparably bound to Russia, while Putin and most Russians believe Crimea, annexed in 2014, has always been Russian. The annexation, as the University of California political scientist Daniel Treisman wrote, overturned “in a single stroke the assumptions on which the post-Cold War European order had rested”.

Finally, many European leaders – again, excepting the British – at least publicly believed in a secular paradise, which would be a federal European state. Last summer, then-Italian Prime Minister Matteo Renzi invited German Chancellor Angela Merkel and French President Francois Hollande to meet on the island of Ventotene where, in 1941, Altiero Spinelli, then a prisoner of the Fascist government, wrote a manifesto calling for a united Europe. In later life, he became an EU commissioner in Brussels, where the building housing the EU’s parliament bears his name. The three leaders paid homage at his tomb: Renzi dismissed Britain’s recent vote for Brexit, and said that “Europe after Brexit will relaunch the powerful ideals of unity and peace, freedom and dreams”.

Yet, like children unable to give concrete forms to their dreams, European leaders have taken only the most hesitant steps towards closer union. The growth and popularity of the nationalist parties of the right almost everywhere has imposed a kind of stasis on the continent’s politics: the hope is that in Dutch, French and German elections this year the nationalists will be defeated and the progress towards closer union re-started.

Even if that happens, such a rekindling of the ideal will be hard to make concrete. This week, Germany’s former Foreign Minister Joschka Fischer wrote that “the EU should be preparing for some profound shocks. The incoming US president, an exponent of the new nationalism, does not believe in European integration”, pointing out that Trump has suggested he may not uphold Nato treaties to protect any threatened member. Fischer’s antidote is a European military, developed by Germany and France: a project often mooted, never seriously pursued.

Brexit, a shock all around, will combine with a Trump presidency to force the EU to put away childish things, and ask hard questions of itself. Infancy may be ending:

John Lloyd co-founded the Reuters Institute for the Study of Journalism at the University of Oxford, where he is senior research fellow. Lloyd has written several books, including What the Media Are Doing to Our Politics. He is also a contributing editor at the Financial Times and the founder of FT Magazine.

Geneva and Burgenstock: the changing face of TV coverage

Balancing principles, interests and feasibility in the Middle East