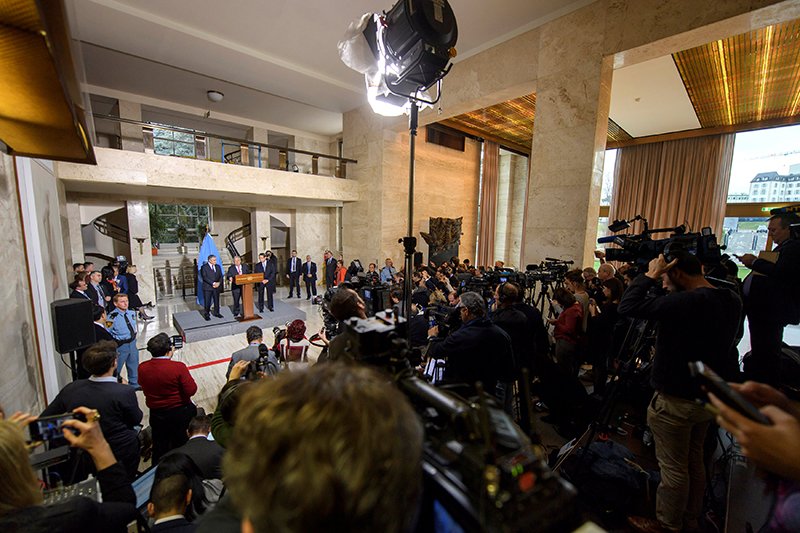 I think one of the most harmful influences on the efforts to find a Cyprus settlement is the excessive publicity. This, unfortunately, was always the case and the Geneva conference, I am afraid, was no exception. I have serious doubts about the prospects of the conference achieving the desired result no matter how well-intentioned the hundreds of people inside and outside the conference hall actually are.

To me all the gatherings of the last few months in Switzerland seemed more like funfairs at which many of the participants had gone to either for the ride or to engage in theatre, like our opposition politicians. It is not possible to solve complex and serious problems like that of Cyprus at conferences with crowds of people, either here or abroad.

Serious negotiations for resolving such a difficult problem cannot be broadcast live on television screens as if they were a football match. It is worth remembering that the Oslo Accord between Rabin and Arafat in 1993, which almost brought peace to the Middle East but was destroyed by Hezbollah, was achieved through a top secret talks’ process. Such was the secrecy that the president of the United States only found out about the accord two days after it had been signed.

Excessive publicity, inevitably, in the end kills procedures regardless of how good the intentions are. Unfortunately those who participate are politicians and their main concerns are their political ambitions, their parties and the votes they would receive in the next elections. With cameras and reporters brandishing microphones outside the venue of the talks everything is contaminated.

As seriously as politicians act and behave inside the negotiations hall they change completely as soon as they step out of it and see the cameras. Glowing examples in Geneva were the foreign ministers of Greece and Turkey. I had not read in full all the speeches made inside the conference hall on Thursday, except that of foreign minister Nikos Kotzias. I thought it was the most sensible speech that could have been made by Greece’s foreign minister under the circumstances.

Of course our smart journalists chose to report just two phrases that could not have been absent from his speech – abolition of guarantees and withdrawal of troops. Nobody thought it was worth reporting excerpts from the actual speech which sent an important message of friendship to the other side. He said: “The solution of the Cyprus problem must afford the greatest possible equality and rights to Turkish Cypriots. Our Turkish Cypriot friends, as compatriots of the Greek Cypriots, must feel that Cyprus is their island. That on this island they can dream about their future. They can think that their children would live on this island. That it would be their island. The Turkish Cypriots must feel safe.”

This was the conciliatory, consensual Kotzias inside the conference hall. I understand that his Turkish counterpart Mevlut Cavusoglu was more or less the same inside. But once they left the conference hall, hostilities resumed with a war of statements and counter-statements.

“I must tell you that we averted the planned failure of the conference,” said Kotzias, who had previously rushed to announce a decision (about the interruption of the conference) that had not been agreed, sparking a host of reactions. The Turks, meanwhile, came back with rhetoric about maintaining guarantees and the continued presence of troops.

It is at this point you are obliged to ask whether it is possible for the peace efforts to have a successful conclusion against this background. And how much greater the chances of success would have been if instead of the negotiations being carried out on our television screens with tens of negotiators and tens of journalists they were held in secrecy in a secluded place with just five participants – without journalists, cameramen and demagogue politicians outside.

Religion the last castle to fall