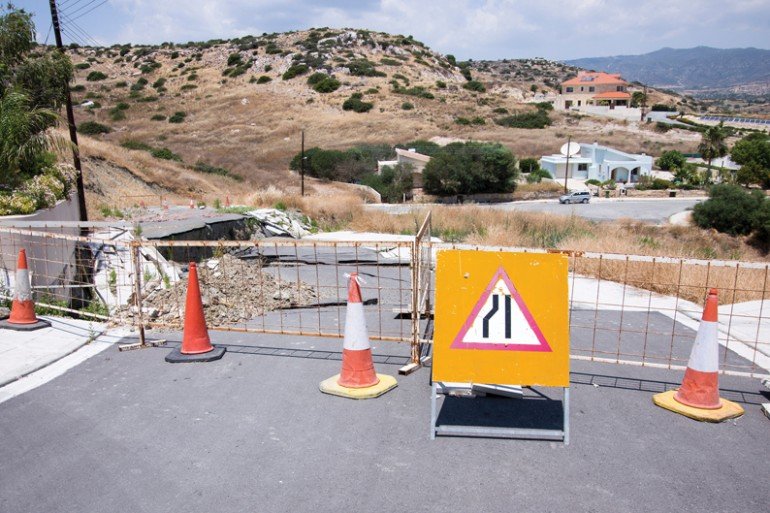 TOWN planning authorities and construction contractors alike are responsible for the land slippage problems faced by homeowners in the Limnes area of Pissouri, an interior ministry investigation has found.

Damages so far are estimated at more than €10 million, reports said.

Many of the affected homeowners are British nationals.

The phenomenon first became pronounced in 2012, a year with unusually high rainfall.

The problem is mainly due to the underground water, which is close to the surface, in combination with the geological conditions of the area.

The ground, up to a depth of 16 metres, is made up of loose material that came from a past landslide. The ground morphology does not allow the water to escape.

According to the ministry probe, the wider area was categorised as residential in the 1980s although it was then known, or ought to have been known, that the ground was unstable.

Compounding the problem, surveyors wrongly assessed the ground’s endurance. At depth, the ground is soft but this was apparently not taken into account, so no foundation piles were laid for houses.

In addition, poor construction practices were followed, such as inadequate filling-in works.

These findings have been forwarded to MPs.

In an accompanying letter to MPs, interior Minister Socrates Hasikos suggested that affected homeowners and land developers engage and coordinate in order to at least prevent a worsening of subsidence problems.

Among others, he recommended that structural adequacy tests be carried out on each affected residence, as well as inclination correction works ensuring runoff.

Residents are also urged to avoid creating ‘soft structures’ on their properties, such as gardens.

According to Phileleftheros, in his letter Hasikos made no mention of the state compensating the concerned homeowners.

Speaking to public broadcaster CyBC on Thursday, frustrated residents complained that they have repeatedly contacted authorities who have failed to engage with them.

“My house is inclined, I have done repairs three times, but more problems come up,” said Pantelis Karayiannis.

Another resident said: “We want to know what to do until the ground stabilises. Why don’t they just be honest and tell us what the situation is?”

Our View: US stance is more supportive of Cyprus process than Russia’s