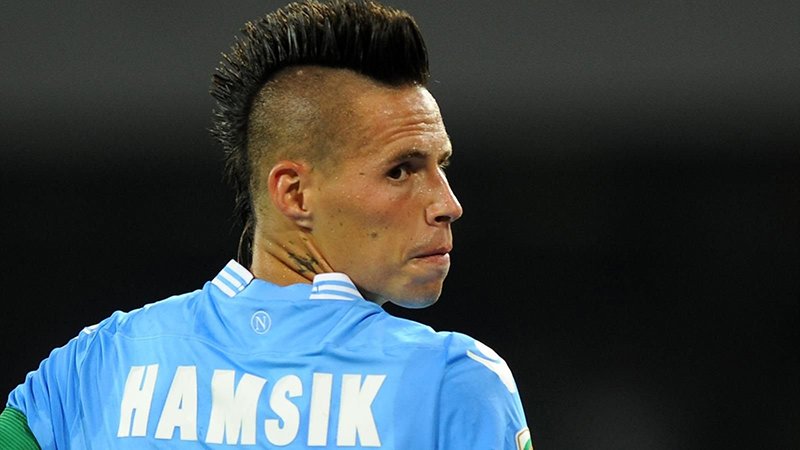 Marek Hamsik and Dries Mertens both scored hat-tricks as Napoli demolished Bologna 7-1 away on Saturday after a wild first half which featured five goals, two sendings off and a missed penalty.

Bologna’s Mattia Destro saw his spot kick saved by Pepe Reina when Napoli were only two goals ahead while Napoli’s Jose Callejon and Bologna’s Adam Masina were sent off within minutes of each other.

The win lifted Napoli, Serie A’s highest-scoring team with 55 goals, into second place with 48 points, one ahead of AS Roma who host Fiorentina on Tuesday. Leaders Juventus have 51 points and host Inter Milan on Sunday.

“We started the match badly and finished it worse,” said Bologna coach Roberto Donadoni. “We made schoolboy errors against a lethal team.”

Napoli, held 1-1 by lowly Palermo in their previous game, made a flying start as Hamsik put them ahead with a diving header after four minutes and Lorenzo Insigne rushed on to Piotr Zielinski’s through ball to add the second two minutes later.

Bologna were offered a way back into the game when Callejon handled in the 26th minute but a poor Destro penalty was saved by Pepe Reina.

Less than one minute later, Callejon was sent off for retaliation after getting entangled with Adam Nagy although it seemed a harsh decision.

Bologna’s one-man advantage lasted for all of six minutes until Masina was sent off for tripping Mertens, the referee judging that the Belgian had been denied a clear scoring chance even though the incident was outside the area.

Mertens himself curled the free kick into the top corner for Napoli’s third.

Vasilis Torosidis pulled one back for Bologna in the 36th minute but it was only a temporary respite and Mertens finished off another counter-attack two minutes before halftime for Napoli’s fourth.

Mertens set up the fifth goal with some nimble footwork and a delightful reverse pass to Hamsik who sidefooted home after 70 minutes and the Slovakian completed his hat-trick with a curling shot from outside the area four minutes later.

Bologna were forced to replace goalkeeper Antonio Mirante with Angelo da Costa and their misery was still not complete as Mertens ran through their defence for his hat-trick in the final minute.

The referee spared Bologna further punishment by blowing for time after exactly 90 minutes.

“I feel a little angry as we created maybe created fewer scoring opportunities tonight than we did against Palermo but then we scored one and tonight seven,” said Napoli coach Maurizio Sarri.