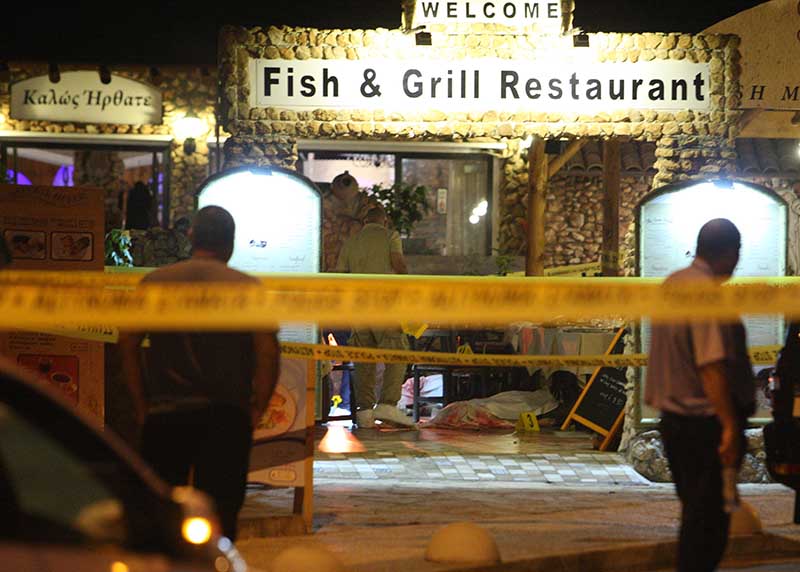 A witness in a trial of four people accused of orchestrating a gangland hit with four dead told the court on Wednesday that he had seen the two shooters with three of the defendants at a holiday home in Protaras before the incident.

Businessman Phanos Kalopsidiotis, police officer Elias Hadjiefthymiou, 46, and his wife Skevi, 39, were gunned down while having dinner at the Stone Garden restaurant on the evening of June 23 last year.

One of the shooters, Albanian Yiani Vogli, was also killed in the incident while a second police officer at the table sustained serious injuries.

Four suspects implicated in the case — Marios Christodoulou (Benny), 39, Panayiotis Pentavkas, 38, Loy Dejan, 42, and Sofia Gregoriou, 28, — are on trial, charged with premeditated murder and conspiracy, among others.

Two other suspects, Charalambos Andreou, 32, and Sotira Neophytou, 30, admitted involvement in the case and were jailed for life and five months respectively in October 2016.

Greek national Athanasios Apostolakos told the court on Wednesday that he was the one who drove the car used in the hit, from Nicosia to the holiday home in Protaras.

Reading from the statement he gave police in December last year, Apostolakos said he used to work as a security guard for Christodoulou and through him he also got to know Andreou.

The witness said Andreou had asked him to drive a car to a holiday home in Protaras, which, it later transpired, was being used by the shooters a few days before the killings.

Apostolakos said Andreou had driven the Honda Integra to a field in the suburb of Makedonitissa. From there, and under Andreou’s instructions, Apostolakos took the car and drove to Protaras.

When he arrived there, he was met by Christodoulou who led him to a poolside table. The witness said he later saw Christodoulou, his girlfriend Gregoriou, and Andreou, meet with two other people whom he did not know.

He said he later recognised one of the two individuals as being the shooter, after he saw his photograph on television and social media.

Apostolakos pointed to Christodoulou and Gregoriou when asked by the prosecutor but the defence objected when he was asked to pick out Burreli and Vogli from photographs.

Christodoulou’s lawyer, Michalis Pikis, argued that the witness had been added at the last moment and was only summoned to court on Tuesday.

Pikis said the prosecution’s action was unacceptable and a blow to a fair trial. Pikis argued that the action was devoid of the safeguards set by law concerning identification from photographs.

Other defence lawyers agreed; Dejan’s defence added that in such cases there was a risk of evidence contamination.

The court rejected the defence’s arguments and the hearing continued with the witness picking out Burreli and Vogli as the two people he saw at the holiday home with Christodoulou, Andreou, and Gregoriou.

The case continues on Thursday.

WHO regional office for Larnaca

Family to get report into 2005 death of soldier