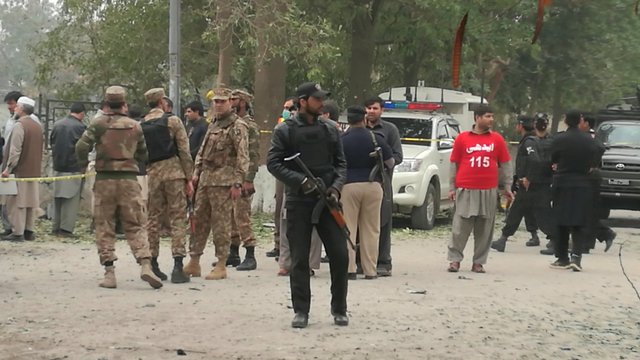 A suicide bomber attacked a van carrying judges in the Pakistani city of Peshawar on Wednesday, killing the driver and a passerby, police said, the second attack of the day in a new surge in militant violence.

Security has improved in Pakistan over the past few years but a spate of attacks in recent days, and a threat by a hardline militant faction to unleash a new campaign against the government, has raised fears of bloodshed.

“A suicide bomber on a motor bike rammed into an official van in which some judges were travelling,” senior superintendent of Peshawar police, Sajjad Khan, told media.

He said three female judges and one male judge had been taken to a nearby hospital while the driver of the van and a passerby had been killed.

The attack took place in a wealthy neighbourhood of the northwestern city, where Taliban gunmen attacked a military-run school in December 2014 and killed 134 children and 19 adults.

Former cricket star Imran Khan, Pakistan’s main opposition leader, was due to visit the nearby hospital. Media reported that he was unharmed.

In a separate attack on Wednesday, a suicide bomber blew himself up outside a government office in the northwestern Mohmand Agency, killing five people.

There was no immediate claim for the Peshawar attack but the Jamaat-ur-Ahrar, a faction of the Pakistani Taliban, claimed responsibility for the Mohmand blast.

The same group claimed an attack in the city of Lahore on Monday in which 13 people, five of them policemen, were killed.

The group said the Lahore attack was the beginning of a new campaign against the government, security forces, the judiciary and secular political parties.

Separately on Monday, a bomb squad commander was killed along with another policeman while they were trying to defuse a bomb in the south-western city of Quetta.

The spate of attacks has underlined the threat militants pose to the government of Prime Minister Nawaz Sharif despite an army offensive launched in 2014 to push them out of their northwestern strongholds.

Pakistan had announced a 20-point National Action Plan after the Peshawar school massacre in 2014, the main thrusts of which included expanding counter-terrorism raids, secret military courts and the resumption of hangings.

Trump to welcome Netanyahu as Palestinians fear US shift