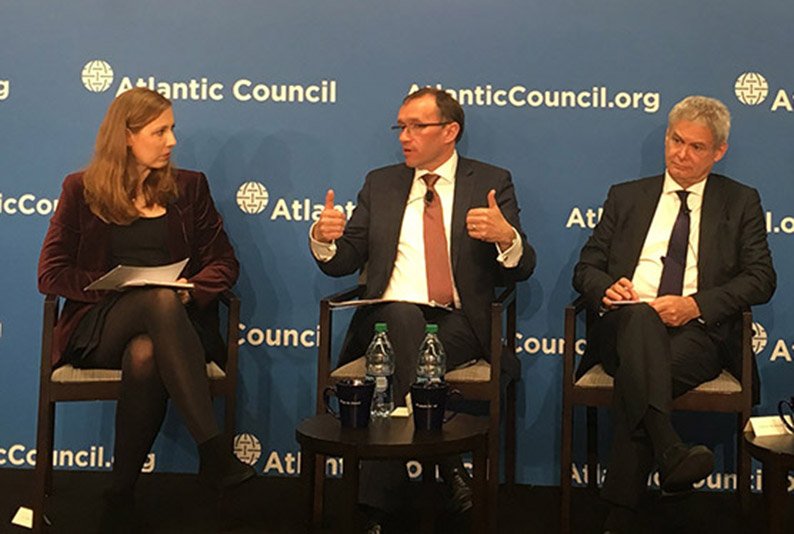 The current crisis in the UN-sponsored talks for a settlement of the Cyprus problem will be overcome and the two leaders, President Nicos Anastasiades and Turkish Cypriot leader Mustafa Akinci, will return to the negotiating table, the Secretary-General’s special advisor Espen Barth Eide said on Wednesday night

In an open discussion in Washington, titled “Strategic and sustainable development for unified Cyprus” and organised by the Atlantic Council think tank, after a short speech by former US assistant secretary of state Victoria Nuland on the state of the talks, Eide, Greek Cypriot chief negotiator Andreas Mavroyiannis, and US assistant secretary of state Jonathan Cohen took questions from Politico journalist Sara Stefanini and the audience.

“I am delighted that this conference is happening, because it means that this settlement is close,” Nuland said in her address.

“This settlement that will be so important for the communities on the island, the region, and so important as a global example of what can be possible when people work hard for peace.”

Acknowledging that the US has a “profound interest” in seeing the two communities flourish and set an example for the region and the world at large, Nuland said one of the key features that have allowed the talks to move as far as they have was the methodology employed.

“Whereas in other peace settlements they have worked from A to Z in a set of problems, these negotiations are doing well, I believe because of the methodology,” she said.

“Because the wise leaders on the island started first with the end state. On February 11, 2014, the leaders concluded with a joint declaration, which sets the frame of the united Cyprus house. It gives the end state, what you have to build before you put in furniture and the rest of the details.”

The two leaders are both enormously committed to finding a settlement, Nuland said, before praising Eide’s skills and contribution to the process.

“My deal friend and one of the best international negotiators, Espen Barth Eide, that Cyprus is lucky to have,” Nuland said, turning to him.

“Espen, if you can’t help these guys get it done, it can’t be done.”

Do not lose this moment, she urged her “Cypriot friends”.

“You are so close, and the region and the planet will be better for it.”

Taking the floor along with Mavroyiannis and Cohen, Eide said two good things came out of January’s international conference on Cyprus.

“First, the two leaders presented maps to each other,” he said.

“That had never happened before. Also, what had been an intercommunal discussion until then, became international, with the three guarantors and the European Union.”

Then, he added, the ensuing Mont Pelerin deputies’ session on security and guarantees – “one of the richest conversations I have heard” – revealed, on the one hand, that there was “a long way to go”, and, on the other, that a settlement “is possible”.

“Security and guarantees will not be the thing that locks this conference,” Eide said.

“Many people thought that the talks will fail because no agreement on guarantees, so it’s important.”

The not-so-good news after Geneva, Eide said, was that time hasn’t been used as well as it could have been.

“We haven’t had the progress on bicommunal issues that would facilitate a return to Geneva,” he said.

According to Mavroyiannis, who headed the Greek Cypriot delegation at Mont Pelerin, “that was the first time we all came together and discussed substance, not official statements”.

“Including, by the way, a discussion raised by TC side concerning the vulnerability of the GC political system because of the existence of extremist elements favouring Enosis,” he said.

“This discussion has taken place.”

Asked about the recent vote by the Cypriot parliament for an annual commemoration of the 1950 Enosis (union with Greece) referendum in state schools, which disrupted the talks, Mavroyiannis said “we have to overcome it”.

“President Anastasiades will tell you that there is more determination than ever, we need to overcome it without humiliating each other” Mavroyiannis said.

“The legacy of the past is always problematic, only the future can unite us.”

On the same issue, Eide said both sides can contribute to overcoming the ongoing crisis in the talks.

“My favourite subject,” he joked.

“President Anastasiades has repeatedly distanced himself from it, and he’s right. But of course, hearing him denounce it, the Turkish Cypriot leader then feels even more strongly about it. Everyone has a role to play, Greek Cypriots have something to do about the source issue, and Turkish Cypriots have to make up their mind on how much they will allow it to disrupt the talks.”

The discussion became momentarily heated when a man in the audience, identified by the moderator as “representative of the Turkish Cypriot foreign ministry Ismet Kurukoglu”, made a short statement, in which he censured Eide for agreeing to participate when Turkish Cypriot negotiator Ozdil Nami was “not given notice about this event”.

Mavroyiannis stepped in to respond with a “very strong disclaimer”.

“First of all, there is no Turkish Cypriot foreign ministry, a minister, or anyone representing the TRNC,” the Greek Cypriot negotiator said, the acronym referring to the unrecognised Turkish Republic of Northern Cyprus.

“The man can talk as a Turkish Cypriot, but – sorry, I mean, what is this? What is this?”

Also, Mavroyiannis said, nobody can impose on anybody, including the United Nations’ Special Representative, “where he will or will not go”.

“By the way, I must say that Ozdil [Nami], who is a good friend of mine, has been informed the same moment I was,” he said.

Indeed, Eide confirmed, the invitations to Mavroyiannis and Nami were identical and emailed at the same time.

“The original email was just sent to an email that was not frequently used,” he said.

“It was just an unfortunate event.”