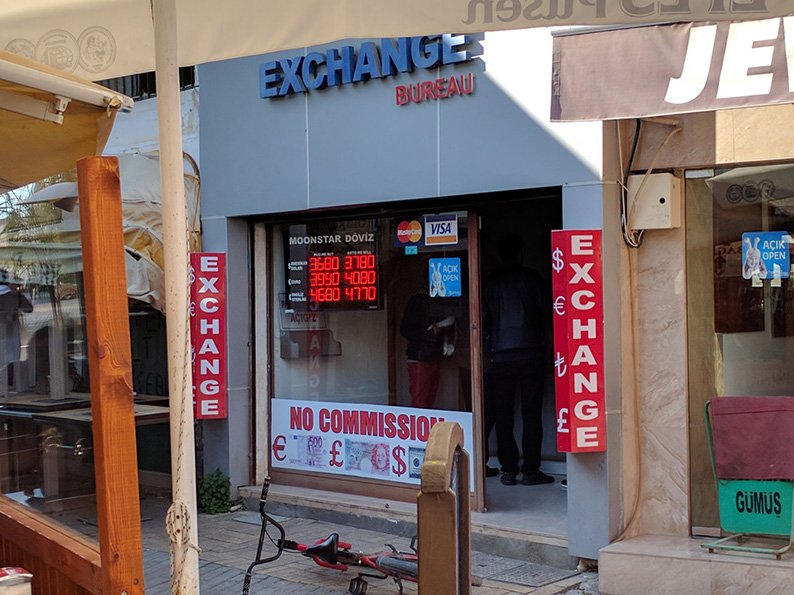 Foreign exchange office in northern Nicosia. Many transactions in the north are in foreign currencies

The Turkish Cypriot Chamber of Commerce (KTTO) has asked for immediate corrective measures after inflation in the north reached 17 per cent due to the devaluation of the Turkish lira, negative developments in Turkey, and a drop in exports and tourist numbers, Kibris reported on Wednesday.

The chamber said the cost of living would continue to increase because of the continuing uncertainty in the market.

KTTO presented a letter to the Turkish Cypriot authorities with suggestions on how to mitigate the damage caused by the economic crisis.

It pointed out that the Turkish government had reduced VAT and and Special Consumption Tax to prevent inflation from rising further.

KTTO chief Fikri Toros demanded implementation of a package of measures without delay, indicating that measures in Turkey had generated movement within the market there.

Included in the proposals is a reduction in VAT from 16 per cent to 10 per cent, public sector transactions to calculated in Turkish lira and use of lira to be encouraged, deductions for rental contracts based on lira, and fixed exchange rates when calculating customs and import tax.

The chamber also wants more support for tourism, tax breaks, assistance to SMEs and public investment to get the market moving.

It also urged the authorities to implement the economic protocol signed with Turkey.

Fees for public sector services are calculated in foreign currency, usually US dollars, to prevent losses that could be caused by using liras.

Until recently, rent and house sales Turkey were done in US dollars while in the north the British pound is used.

The Structural Transformation Programme was signed on May 27, 2016 and is the continuation of many protocols implemented since the 1980s.

The programme aims to make the north’s economy more competitive.

It contains laws covering many areas in the public and private sectors, privatisations, cutting the budget deficit, effective use of funds provided by Turkey, and reforms in every aspect of economic life from infrastructure and education to agriculture and tourism.

Our View: Auditor-general has lost all sense of measure in his dealings with Hasikos