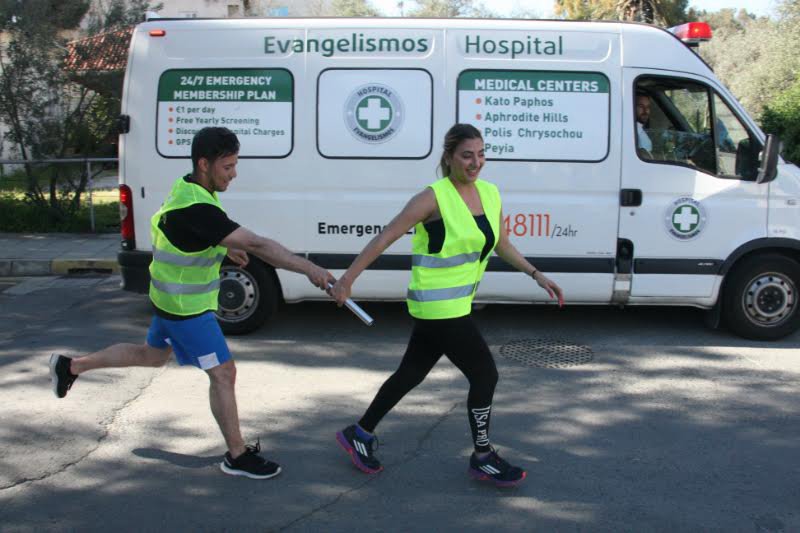 Dozens of protest runners who set off from Polis in Paphos on Thursday arrived at the presidential palace in Nicosia on Friday lunchtime to express their dissatisfaction that successive governments have failed to invest any money into the area.

This has led to poor job prospects in the district, said protestors, and the initiative is being backed by the Polis district youth, with the support of the Polis municipality and other nearby communities.

The 215-km ‘Ultramarathon’ consisted of three relay stages, taking in the Polis to Paphos road, the old Paphos to Limassol road, and then Limassol to Nicosia. The young runners delivered a memorandum with the demands of the region.
“The goal is to demonstrate the injustice experienced for decades, enforced by the state, on the region and the residents of Polis, which unfortunately despite our efforts has remained underdeveloped, neglected and isolated. This is in contrast to the other cities of Cyprus, which receive better treatment from the state,” said Polis Mayor Giotis Papachristofi.

He noted that delays and stagnation in construction of the Paphos to Polis highway were of particular concern, and said that residents were frustrated and dissatisfied with a lack of interest in the project shown by the authorities. He said the delays, which date back more than two decades, were  unacceptable.

“Residents of Polis are treated by the state as second-class citizens, and denied the right to a safe road network in contrast to residents in the other districts, which have a secure and comprehensive road network. “

The mayor also noted that despite the fact that Polis and the surrounding areas display excellent growth prospect, no significant advantages have been exploited. He added that the absence of 4 and 5 stars in the Local Plan for the area, was a great weakness and degraded the region compared with others.

“Construction constraints have condemned the region to underdevelopment and discourage investors from building modern hotels. Unlike other regions, which enabled the construction of hotels.”

He said that the municipality wants constraints lifted so as not to ‘rely on the discretion of the planning department to give permission, as and when’.

“We are also asking for a special promotion in tourism development, with the provision of other incentives, for the construction of hotel units to rejuvenate and expand growth prospects.”

He also noted that under no circumstances would the municipality or local authorities accept limitations, whether indirect or direct, or any ‘hidden agendas’, which would lead to a further expansion of the Natura 2000 protected zone beyond its current limit.

The mayor also wants to raise awareness about ongoing problems being faced at Polis hospital. He said that it is imperative that the facility must be able to at least provide a satisfactory level of primary health care to the residents and visitors to Polis and the wider area.

“The hospital covers more than 20 communities, around 13,000 residents, this number doubles in the summer period, and there are significant problems. These include the staffing of medical personnel, the lack of specialist doctors and so on. This must be addressed.”