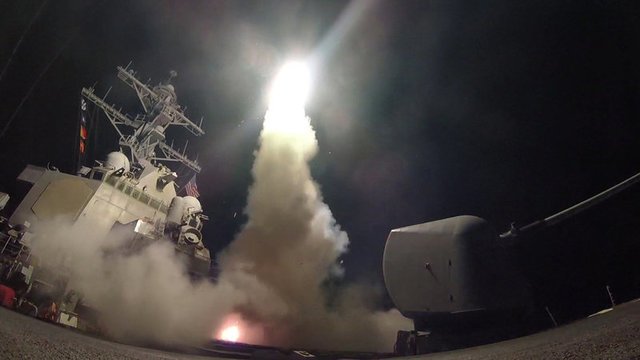 “I was told by (US Secretary of State) Rex Tillerson during the night,” Ayrault told Reuters and France Info radio in the Mauritanian capital Nouakchott where he is on a diplomatic visit.

“Use of chemical weapons is appalling and should be punished because it is a war crime,” he said, adding that Russia and Iran needed to understand that supporting Syrian President Bashar al-Assad made no sense, and that France was not seeking a confrontation with those two countries.

Putin’s spokesman Dmitry Peskov was cited as saying that the Russian leader, a staunch ally of Syrian President Bashar al-Assad, regarded the US action as “aggression against a sovereign nation” on a “made-up pretext” and as a cynical attempt to distract the world from civilian deaths in Iraq.

Peskov was quoted as saying that Russia did not believe that Syria possessed chemical weapons and that the US move would inevitably create a serious obstacle to creating an international coalition to fight terrorism, an idea that Putin has repeatedly pushed.

He said the United States was using the Islamic State militant group as a tool for its own geopolitical interests.

“Iran strongly condemns any such unilateral strikes … such measures will strengthen terrorists in Syria … and it will complicate the situation in Syria and the region,” ISNA quoted Bahram Qasemi as saying.

Syrian monitor says at least four soldiers killed at airbase
The Syrian Observatory for Human Rights said at least four Syrian soldiers including a senior officer were killed in a US missile attack that had almost completely destroyed a Syrian airbase near Homs city.

The Syrian military could not immediately be reached for comment on the report by the British-based group, which said its report was based on its own sources. The Observatory said dozens of members of the Syrian military had been wounded in the attack.

The Observatory said Sukhoi 22, Sukhoi 24, and Mig 23 warplanes had operated from the base. It said the officer killed was a general.

Saudi Arabia says fully supports US military strikes in Syria
Saudi Arabia said on Friday it “fully supports” US strikes on military targets in Syria, saying it was a “courageous decision” by President Donald Trump in response to the use of chemical weapons against civilians.

“A responsible source at the foreign ministry expressed the Kingdom of Saudi Arabia’s full support for the American military operations on military targets in Syria, which came as a response to the Syrian regime’s use of chemical weapons against innocent civilians…,” a statement carried by state news agency SPA said.

The statement praised what it described as “the courageous decision” by Trump and said it holds the government of Syrian President Bashar al-Assad responsible for the military strikes.

Australia PM says US strike on Syrian base “proportionate, calibrated”
Australian Prime Minister Malcolm Turnbull said on Friday he supported the US air strike on a Syrian airbase, calling it a “proportionate and calibrated response”.

In a televised statement, he also called on Russia to play its part in bringing peace to Syria.

Syrian opposition SNC welcomes US strike on airbase
The Syrian National Coalition opposition group welcomes US missile strikes that hit a Syrian army airbase and hopes they will continue in order to stop Syrian government bombardment, an SNC media official said on Friday.

“We hope for the continuation of the strikes in order to prevent the regime from using its planes to launch any new air raids or going back to using internationally banned weapons,” said Ahmad Ramadan, head of the SNC’s media office.

US President Donald Trump said he ordered missile strikes against the airfield from which a deadly chemical attack was launched this week, declaring he acted in America’s “national security interest” against Syrian President Bashar al-Assad.

US officials said the military fired dozens of cruise missiles against the base in response to the suspected gas attack in a rebel-held area, which Washington has blamed on Assad’s forces. The Syrian government has strongly denied responsibility and says it does not use chemical weapons.

“The airbase targeted by the US strike was used to kill Syrians,” Ramadan said, adding that the SNC believes the base in Homs was partly used to launch chemical attacks.

The US attack “sends a clear message to the regime and its backers” that they can no longer avoid repercussions, Ramadan said.

The governor of Homs province said earlier that the airbase was used to support Syrian army operations against Islamic State.

Trump, China’s Xi dine ahead of talks on security, trade