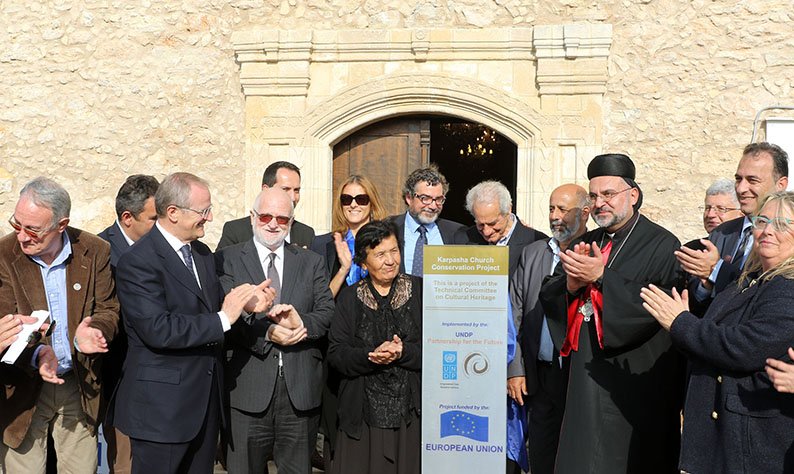 THE Technical Committee on Cultural Heritage, the European Commission and the United Nations Development Programme have returned the oldest Maronite church on the island to the community of Karpasha in the Kyrenia district after extensive conservation work. The Holy Cross church is believed to have been built in 1445.

The project which cost €48,500 was funded by the European Union with a contribution from the Holy See.

Takis Hadjidemetriou of the Technical Committee said that for him the visit to Karpasha and the Holy Cross church was a revelation.

“We should listen to the voice of our land and the many voices of the people and the single voice of our homeland,” he said and urged all Maronites, Latins, Armenians, Turkish Cypriots and Greek Cypriots to build the Cyprus of the future with love.

Turkish Cypriot Ali Tuncay said many nations guided the history of civilisations and contributed to the progress of humanity, leaving behind them numerous monuments and Maronites are a significant part of this process.

Cultural heritage and different cultures, he said, should no longer be factors that cause conflicts, but factors that contribute to cooperation, peace and prosperous living of both communities. If we can learn to respect cultural differences and tolerate, we can achieve lasting peace. He underlined the need for elimination of all obstacles and restrictions that apply on cultural heritage to ensure that cultural heritage is no longer part of the Cyprus problem. “We still have a lot to do and they cannot wait for the solution of the Cyprus problem”, Tuncay added.

Karpashia church is one of three Maronite religious heritage sites selected by the technical committee to benefit from conservation interventions within the EU funded and UNDP implemented programme ‘Support to Monuments of Great Importance for the communities of Cyprus’.

Conservation works included a general cleaning of the church, replacement of metal gutters and downpipes, removal of existing plaster and repainting of stonewalls surfaces, repair of the stone belfry, replacing of damaged stones and conservation of frescoes.

Maronite Archbishop Youssef Soueif thanked all organisations for their effort and for working together in the spirit of a family and collaboration and performed a service with pilgrims as part of the handover.

Two other Maronite monuments have benefited from similar interventions. Works have been completed at the Old Saint George Church in Kormakitis which was built in the 16th century and was the main church of the Maronite community until the early 20th century when the new Saint George cathedral was built.

Ongoing works at the church of Ayia Marina are expected to be completed in a month.

The programme ‘Support to cultural heritage monuments of great importance for Cyprus’ aims to assist the reconciliation process by increasing trust between the two communities through the implementation of confidence building measures agreed by the Technical Committee on Cultural Heritage.