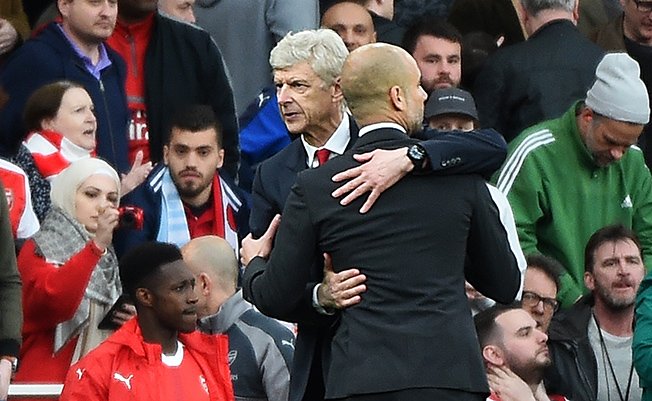 Wembley has a special significance for City boss Pep Guardiola, who picked up two European Cups with Barcelona at the venue - one as a player and one as a manager. Opponents Arsenal and manager Arsene Wenger are under pressure following a poor run of results

Arsenal’s fate in the FA Cup will play no part in manager Arsene Wenger’s decision on whether he stays or leaves the club at the end of the season, the Frenchman said ahead of Sunday’s semi-final against Manchester City at Wembley.

Wenger has come under pressure from some former players, supporters and the media after a poor run of results left the club in sixth spot in the Premier League and likely to miss out on Champions League qualification for the first time under the Frenchman.

Wenger said the FA Cup semi-final was an important game but the result would have no impact on his decision.

“It doesn’t play any part (in determining my future),” Wenger told reporters.

“The FA Cup is a very important game for me because it’s the next game and because it’s an opportunity to win a trophy this season.

“So of course we are all fully focused on that. My future is Sunday. My commitment is total and I am only focused on Arsenal.”

Wenger conceded his team were not bursting with confidence after their recent woes but said they would be determined to land silverware.

“It’s a special experience and for us, I think we are focused, highly motivated,” Wenger added.

“Maybe not at the maximum of our confidence … but that is a good opportunity to show we are ready for a fight and how much we want to go to the final. Because it’s maybe our only opportunity to get a trophy this season.”

City striker Gabriel Jesus meanwhile will travel to Wembley with the squad and could feature against Arsenal, manager Pep Guardiola has said.

Brazil international Jesus, who made an instant impact after joining City in January with three goals in four league games, returned to training earlier this month after suffering a foot injury against Bournemouth in February.

“He’s much, much better. Today he made part of the training with us,” Guardiola told a news conference on Friday.

“He’s coming back with his happiness and we are so happy he is back again.

“All the squad are going to travel as a group to Wembley so he will be part of that. After that we are going to see.”

The Spanish manager ruled out defender John Stones for the weekend’s clash because of a muscular problem.

A visit to Wembley has a special significance for Guardiola, who picked up two European Cups with Barcelona at the venue – one as a player and one as a manager.

He won 21 trophies in seven years while in charge of Barcelona and Bayern Munich.

“Wembley is important part of my life,” Guardiola said. “I would like to win the FA Cup to prove to my players in their heads how good they are.

“You realise you have lived that experience and when you win a title or a final it is a lot of stress and pressure. When you handle that and are able to win, the next time will be a little bit easier.”

City have won the FA Cup five times, with the last victory coming against Stoke City in 2011 under Italian manager Roberto Mancini. (

Barca look to bounce back against eternal rival Real