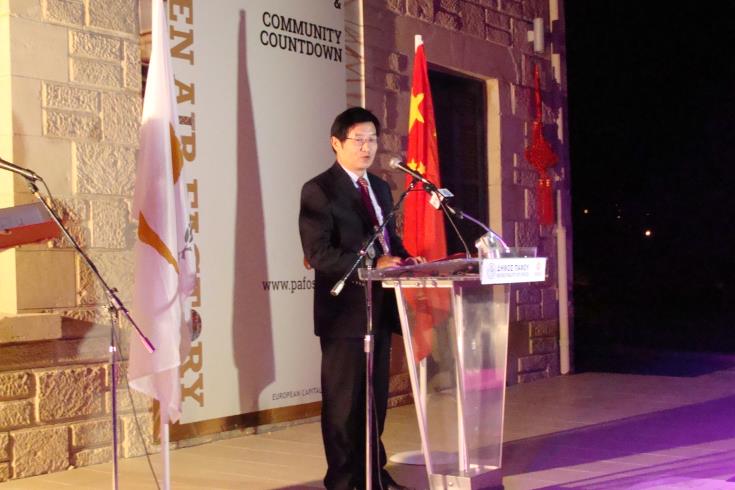 It is inevitable for there to be some difficulties when it comes to a critical stage in negotiations, Ambassador of China in Nicosia, Huang Xingyuan said on Thursday referring to the Cyprus talks.

During a news conference at the Chinese Embassy on the Belt and Road Forum, the ambassador recalled a Chinese saying which says: “There are always difficulties before a happy ending”, adding that “when it comes to a critical stage it is inevitable that there will be some difficulties”.

Speaking through an interpreter, he expressed the belief that the Cypriot people have enough wisdom and the leaders from both communities have the political willingness and leadership to overcome difficulties.

China’s  stance, he said, was very clear. “We support all the efforts provided by the international community. We also wish the Cypriot communities can work together for the early settlement of this issue”.

The ambassador said China, as one of the five Permanent Members of the UN Security Council supported the progress made by the two communities and would continue to support Cyprus after reunification.

As regards bilateral relations, he said that they were a good example to follow, different cultures but both facing common challenges, such as economic transition, reforms and issues regarding territorial integrity.

Asked about trade, he said there was room to improve volume and that the embassy was doing its best to bring more investors to Cyprus and encourages more exports of Cypriot products such as wine and halloumi.  He also said that e-commerce could enhance the trade volume.

On tourism, the ambassador said Chinese people were interested in visiting Cyprus and that the number could be doubled.  He also said that there were efforts underway to facilitate the issuing of visas and to create direct flights if numbers were high enough and the visa system worked well.

He also referred to the Belt and Road Initiative and the recent Forum in Beijing with the participation of 29 heads of state and government, and 1,500 delegates from over 130 countries.

The aim of the Forum, he said, was to discuss the major plans for cooperation among different parties, jointly build the cooperation platform and share together benefits of cooperation in an increasing interdependent world which is faced with surging challenges.

Cyprus, he said was in a geographically strategic position to join this effort as a bridge between two continents.

The ambassador said another area where Cyprus and China could cooperate was on solar energy. China has a very advanced technology and Cyprus could contribute to the solving of some problems it was facing within the EU in this sector.

There was also cultural cooperation, the ambassador said, referring to the series of cultural events called ‘Heart to Heart’ that the Chinese Embassy launched in April.

And, from May 25–27 the first ever China Film Festival will take place with screenings in Nicosia, Limassol and Paphos. On June 6, a thematic seminar on cooperation under the framework of the Belt and Road Initiative will be held wide participation from political, business and academic circles.