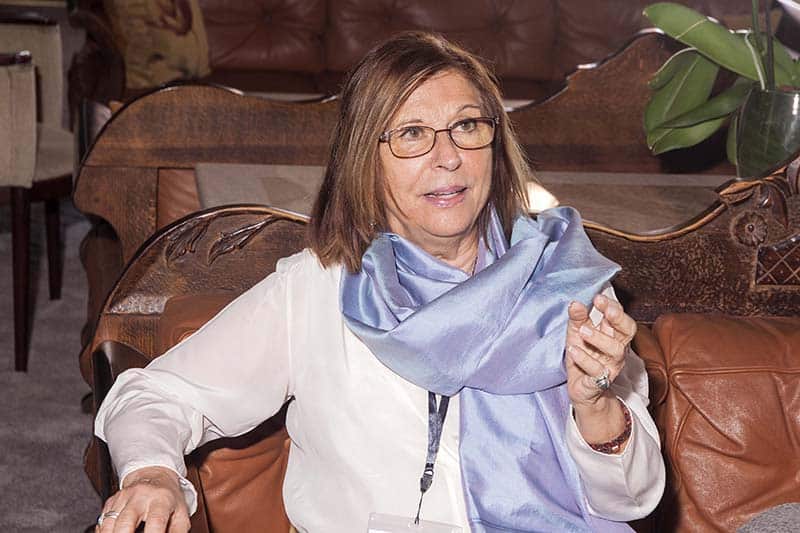 Sycophants tend to show their true colours when faced with a man or a woman bearing a title; one can almost see the imaginary genuflecting going on when a Sir, Lord or a Baroness is introduced to the company. I observed this behaviour last week when going to interview Baroness Frances D’Souza, guest speaker at the Creative Women conference in Paphos.

But meeting her wasn’t as simple an undertaking as I had planned, taking a flurry of e-mails between my cosy Paphos desk and the London offices of the conference organisers. The time I was originally allotted would have just about allowed me a handshake (or curtsey?), which was upped by the PR to a 40-minute slot between coffee break and the next forum. This was no way sufficient to find out more about the woman. Eventually I was given a proper slot but with dire warnings about running over. So it was with some misgiving I sat in the foyer waiting with our photographer when a somewhat diminutive figure was gently guided towards me as if made of glass. Dressed impeccably in a linen shirt and trousers with a pale blue silk pashmina draped around her neck, she is a good looking woman but with a handshake that nearly broke my knuckles. She later proved herself to be in possession of a quite penetrating stare that when fixed on you for a period of time might render those with a weaker constitution to seek comfort behind the nearest sofa.

It then took me about six minutes to partially dispel my prejudice surrounding those holding a title, as does Frances Gertrude Claire D’Souza in addition to a ‘gong’ in the form of a CMG – a companion of honour of the order of St Michael and St John, a diplomatic honour instituted in the wake of the Napoleonic wars and given on the recommendation of the foreign office to those who have given distinguished service overseas. Frances turned out not to be the snobby fragile flower one was led to believe but a woman firmly fitted with a jolly good length of steel running through her backbone. Importantly she has a good sense of humour, something which I suggest was an essential attribute for her role as Lord Speaker in the House of Lords, a post she held from 2011 to 2016.

Frances read anthropology at University College London and completed a doctorate in philosophy at Oxford before working as a science lecturer in addition to working as an independent research consultant in human rights for the United Nations – all this after being married at 16, having eloped to Canada to marry a man 15 years her senior with parents in hot pursuit, and giving birth to her daughter at 17. She is now a very proud grandmother. She also surprised a good number of people when at the age of 58 she remarried her first husband after being apart for 38 years. Put that down to a young marriage and a woman who after you talk to easily disavows Byron who said that love for a woman is her whole existence. Frances could possibly have such an opinion on love but she seems far too absorbed in the world around her, not to mention in herself, for it to be the beginning and end of her life. Many would be intimidated by her sheer drive to achieve a result but her optimism, passion and faith in tomorrow are what make her company so uplifting.

I liked her and not only because she freely admitted she has made enemies in the House, specifically when she stated in a BBC2 documentary in 2016 that the House of Lords did indeed have a core of peers who work incredibly hard but there were others who do absolutely nothing. She also mentioned direct to camera that although the peers don’t receive a salary for the work they do they do receive an attendance allowance. She went on to regale a story of a peer who kept a taxi running while he dashed into the foyer of the Lords so he could ‘sign in’ and thus claim his daily allowance before rushing out minutes later to depart in the taxi. Muck then began to fly and she was outed by the Daily Mail as being a woman who had spent £4,000 on flowers for her office, a somewhat over blooming statement when it was for a five-year period.

When they walk through the impressive doors and take their seats in whichever House, a career-based politician will have been active in school, and again in further education, and may even have gone into a post that is again politically based through supporting a candidate or lobbying, meaning many arrive not having had what most people would call a “proper job working alongside different cultures, being able to take on different challenges. I do believe this must lead to a sort of isolationist mentality which isn’t always healthy.”

While many in the UK dismiss the Lords as being out of touch and one even recently described the facility as the best day care for the elderly in London what can’t be debated is how the men outnumber the women, but this too is something that didn’t overawe Frances, who was nominated to the House by Tony Blair. “My gender really hasn’t been a problem for me although other women have had sexist comments made about them and even to their faces. I dislike this but slowly but surely the obvious feelings of the male members of having to cope with woman invading their private club is mercifully changing mainly because women are also making huge contributions for the good.”

A far cry from the somewhat cosseted “bubble” that is the House of Lords were her days at the forefront of human rights. “I lived for several years in Mozambique during the civil war and witnessed some terrible abuses in Soweto after the uprising in 1976. I travelled a lot through the country and saw people being whipped in the street and a good deal more regarding the sheer savagery that occurs when violence is aimed at a country’s own people. One of the problems we have had to solve over the years is the somewhat misguided concept that aid to these countries would be based on the attitude of ‘we know what’s best for your country so we will do it our way’. This had to change and a better more effective method of targeting aid had to evolve and, importantly, once you take on this massive commitment there has, from the off, to be a very well thought out exit strategy in place and that was usually absent in many cases,” she explains from the comfort of the Elysium hotel’s lobby.

Perhaps a more high profile was her leading role in the Article 19 human rights group as the director of which she took on the defence of Salman Rushdie after Ayatollah Khomeini’s 1989 fatwa against him and others associated with the publication of his novel The Satanic Verses. Article 19 was established in 1986 and was named for the provision in the Universal Declaration of Human Rights that protects freedom of expression. “We succeeded in bringing about a huge level of international awareness and Rushdie was able to come out of hiding in 1998 after the Iranian government lifted the fatwa against him, but I do believe these days it would be a much harder job to have the same outcome. Liberty is the air that we breathe and to us it is freely available but many hundreds of thousands of men women and children around the world do not have the opportunity to have breathable ‘air’ freely available to them”.

While here in Cyprus, Frances gave a speech based on the premise that women can and do make a difference in whatever sphere they choose but for many this keeps them clear of the field of politics for a whole host of reasons. “I firmly believe that without women the political conversation is simply incomplete,” says Frances. “Democratic systems are at their most legitimate, credible and effective if there is engagement from all corners of society and democracy is undermined if women do not participate. Some of the obstacles women face include outright discrimination and harassment, child marriage, modern slavery, and female genital mutilation – to name only a few.” The World Bank reports that of 173 countries it recently examined 90 per cent have legal restrictions on women in a variety of contexts including ownership of property, and in 35 of these countries women have grossly unequal property rights. In 17 of these countries women cannot leave their homes without an accompanying male relative. “I believe passionately in education being the one key that can unlock the fact that so many women still live in states of poverty, fear, exploitation and utter weariness. Although political empowerment is undoubtedly their right it is unrealistic to expect these women to aspire to political involvement when their primary concern is basic survival and subsistence. The conditions have to be created which first allow political equality. I said in my speech that in order to achieve women’s development and inclusion there has to be the following: education, financial inclusion, employment, stable societies, leading to economic growth, and the answer always has to be – politics”.

Over her long career in politics and human rights a continuing theme for Frances has been the education of girls, “this for me is an absolute must and a subject which is very close to my heart”. And to push the subject she has for several years been “quietly entering Afghanistan” with her latest trip being only a couple of weeks before her sojourn to Cyprus. At 73 that is tenacious indeed. It was here several years ago that she first met a young man called Aziz who was trying to set up a school in Kabul with a rudimentary shack with a sheet hanging from the ceiling to separate the two tiny classes. Over the week around 30 pupils took it in shifts to attend the school. “These girls routinely encountered frontline dangers and showed enormous bravery in just getting to this shack safely. I was so impressed with this young man’s commitment to educating girls as he knew this had to be the way to free them from everything from child marriages, abuse, FGM and massive inequality. He was giving them the basic tools needed to be an active force for good for themselves and their families. Aziz told me that he had one old lady who came to the ‘school’ wanting to learn about geometry as she needed to know how to properly divide up her family land!” For the past 15 years support has been put in place for Aziz and today the school boasts a new building which houses 4,000 pupils, half of which are girls, and has been named The Frances d’Souza Marafat High School. “That has been the highest honour ever given to me.”

Frances D’Souza is a woman who doesn’t suffer fools gladly, and she basically works to uplift human dignity through human rights, which in her view is not a privilege granted by the few, but a liberty entitled to all. She is a pragmatist and realises the world isn’t a great place, she also knows through years of experience just which battles to take on and win, and although she has a role for life within the Lords, her life’s work of raising awareness of women’s rights is always going to be placed front and centre for her.

Noble Energy not connected to troubled Noble Group, it says