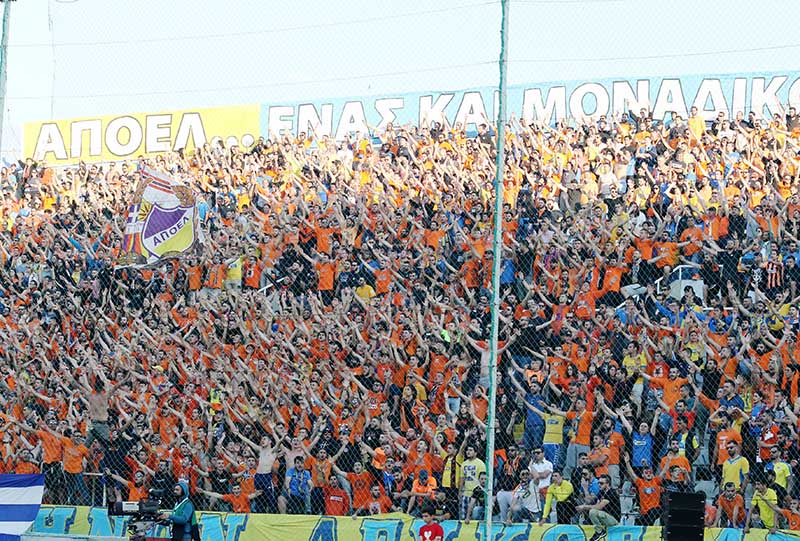 Apoel fans at a game

Police are investigating after around 40 Apoel fans on motorcycles attacked the Omonia clubhouse in Lakatamia on Wednesday night, causing minor injuries to the people in the building, police spokesman Andreas Angelides said on Thursday.

The motorcyclists had their faces covered with hoods and helmets, and threw Molotov cocktails, crackers and stones at the club.

The attack occurred about an hour after the Cup Final which Apoel lost to Apollon. Angelides said the police had mobilised in a very short time after the attack.

He also claimed that worse scenarios were avoided by the police’s preventive actions. “The night of the Cup Final ended smoothly, due to police’s redesigned plans after Tuesday’s incidents in Limassol,” he said.

The Omonia Lakatamia club said through their official Facebook page on Thursday: “We cannot stay silent on the provocative attitude of the police which, when arrived at the club after the end of the incident, tried to arrest some of our club members! Once again, they made it clear that the police chief and especially the responsible minister are backing the fascists.”

A passing driver was also injured while in his vehicle with his child, reports said. Police found an abandoned motorcycle without registration plates at the club, which is believed was used in the attack. The motorcycle has the emblem of the Nationalist Party, Elam.

With regard to the Cup Final, Angelides said that police managed to preserve public order and safety both inside and outside the stadium.
Specifically, Angelidis said that outside the northern block of GSP stadium, a large drum was found abandoned, inside of which were placed ten firecrackers and ten smoke bombs.
“After a physical check carried out on a 22-year-old entering the southern stand of the stadium, a smoke bomb was detected in his possession,” he said.
The 22-year-old was arrested and was brought before the district court of Nicosia on Thursday. The court convicted him and imposed a fine of €500. He was also banned from football stadiums for a period of six months.

Meanwhile, Director of GSP stadium, Phivos Constantinides, published a statement followed by a video that shows Apoel fans shooting with a flare gun against Apollon fans.

In his announcement, Constantinides wondered if someone has to die before the state and the competent authorities take action and kick the hooligans out of the stadiums.

“Tolerance, coverage, funding, support, and protection of those who cause trouble, as well as the mocking of the public by the state, must  be stopped”, he added.
Constantinides also accused the state of imposing penalties that reward the hooligans, obstruct the law and of being indifferent t what needs to be done.
“Political parties serve the interests of teams which are in their sphere of influence. These phenomena are constantly increasing, people stay away from the stadiums and football clubs go bankrupt,” he concluded.