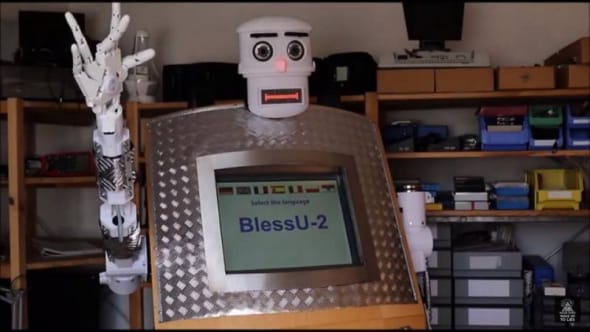 Screen grab of the priestly robot

Wittenberg is the German city where Martin Luther nailed his 95 theses to the church door 500 years ago and launched the Protestant Reformation. To mark the anniversary, the local Protestant authorities have installed a robot called BlessU-2 to deliver blessings in five languages.

The robot priest has a touchscreen chest, two arms and a head. After you have chosen your language the robot raises its arms, recites a verse from the Bible, and says “God bless and protect you.” It also beams light from its hands.

Just what we needed – and it comes with the full support of the Protestant Church in Hesse and Nassau. “We wanted people to consider if it is possible to be blessed by a machine, or if a human being is needed,” explained spokesman Stephan Krebs to the The Guardian’s religion correspondent, Harriet Sherwood. “The idea is to provoke debate.”

When pressed, Krebs admits that they are not planning to replace human pastors with machines: “We don’t want to robotise our church work, but see if we can bring a theological perspective to a machine.” Good luck with that, then – but most people will just see this as another, rather comical example of robots taking over what used to be human jobs.

There’s been much talk about the “robot revolution” in the media recently. Automation has already killed millions of jobs, we are warned, and cannot be stopped. To former assembly-line workers and bank tellers whose jobs were automated out of existence two decades ago, that has the ring of truth. Ten years from now, it will probably also ring true to millions of former taxi-, bus- and long-distance truck-drivers.

And automation may also be bringing us a political revolution. Many people suspect that shocking political events like Brexit, the election of Donald Trump, and a 30 per cent vote for the ultra-nationalist Marine Le Pen in France’s recent presidential election are linked to the growing numbers of angry, jobless people in the Western industrialised countries.

But wait a minute. What “growing number of jobless people”? The official unemployment rate in the United States is now down to 4.5 per cent. That statistic, however, only counts those who are actively looking for work. It does not count those who have given up looking for work.

If you include all those who are not working and not just the job-seekers, then 17.5 per cent of American men of prime working age (24-55) are, to use the old word, “unemployed”. The last time US unemployment was at that level was in 1936, in the middle of the Great Depression.

Moreover, this hidden reef of unemployed people is biggest in the former industrial heartland of the United States, now known as the Rust Belt, where a critical number of ex-Democratic voters were so angry that they switched to Trump and put him into the White House.

This new reality is partly hidden by the fact that so many of these unemployed people have managed to wangle their way into disability benefits: one American worker in sixteen is now certified as disabled, whereas in 1960 (when health and safety standards were far lower) only one worker in 134 was. But back then the official statistics on unemployment were pretty close to the truth.

Exactly the same applies to the United Kingdom, where unemployment is officially only 4.8 per cent. But Sheffield Hallam University’s Centre for Regional Economic and Social Research reckons that almost one-third of the people on incapacity benefits in Britain would actually be working in a full-employment economy, and that the true jobless rate in some northern post-industrial areas reaches 17 per cent.

The “angry men” (and angry women) who make up this hidden reef are the key group who voted for Trump (and Brexit, and the National Front). The Americans among them have been told by Trump that their jobs were stolen by foreigners, but both in the United States and elsewhere they were actually mostly taken by automation.

Not all the jobs will go, of course, but a study released in March by financial services firm PwC (PricewaterhouseCoopers) predicted 38 per cent job losses to automation in the United States in the next fifteen years.

The risk is not just mass unemployment, but the political radicalisation that comes with it. We’re not going to stop the automation, so we will have to redistribute the remaining work. We also have to find ways of putting real money into the pockets of those who have no work, or else the whole capitalist business model will collapse. (Not enough customers.)

And we have to find ways of subsidising people without treating them like “losers”, because that’s what really drove the anger that put Trump in office. Otherwise, the populist demagogues who get elected in twenty years’ time may make us look back fondly on the Trump years.

But cheer up. We won’t really have robot priests.

Wind power is a shameful waste