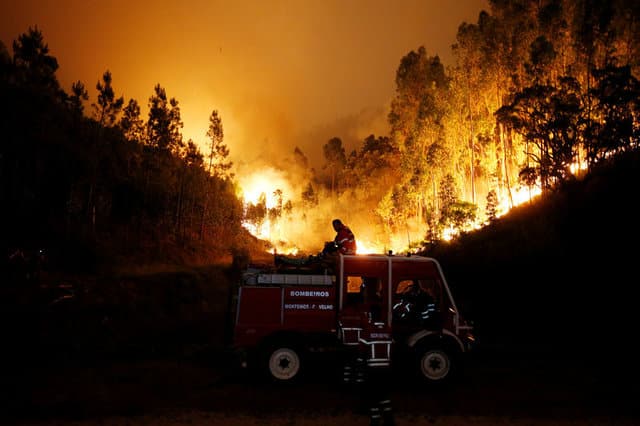 Firefighters work to put out a forest fire near Bouca, in central Portugal

A huge forest fire raging since Saturday in central Portugal has killed at least 62 people, the government said on Sunday, in what is possibly the deadliest-ever forest blaze in the Atlantic coastal country, used to the woods burning almost every summer.

“The dimension of this fire was such that we don’t have memory of such a human tragedy,” Prime Minister Antonio Costa said as he arrived in Pedrogao Grande, a mountainous area some 200 km northeast of Lisbon.

He said it was vital to focus on the prevention of new fires, amid a continuing heat wave, strong winds and lack of rain. He also warned that the death toll could still increase.

Speaking in the Vatican, Pope Francis, who visited Portugal last month, mentioned the victims in his weekly address: “I am close to the dear people of Portugal, hit by a devastating fire which is raging in the forests around Pedrogao Grande, causing many victims and injuries. Let us pray in silence.”

French President Emmanuel Macron said in a Twitter message: “Solidarity with Portugal, hit by terrible fires. Our thoughts are with victims. France makes its aid available to Portugal”.

The European Commission’s aid chief, Christos Stylianides, said in a statement that “all will be done to assist the authorities and people of Portugal at this time of need.”

The death toll released by Jorge Gomes, the secretary of state for internal affairs, has gradually climbed from the 19 initially announced late on Saturday. Gomes said most of the victims were caught in their vehicles on the road.

In one village of Nodeirinho, where 11 residents have died, state television RTP showed burned out cars and blackened houses. Shocked residents spoke of a whole family that was trying to flee their home in a car but got caught in “a tornado of flames”.

“It does not seem real, it is out of this world… It is an authentic inferno, we have never seen anything like that,” the mayor of Pedrogao Grande Valdemar Alves told reporters. Over 20 villages have been affected.

Another 54 people have been injured and taken to hospitals, including four in serious condition.

The blaze on Saturday hit the mountainous area amid an intense heat wave and rainless thunderstorms. Police said a lightning striking a tree probably caused the fire.

Hundreds of firefighters were still battling the flames on Sunday. Various local motorways were shut for safety reasons.

“The smoke cloud is very low, which does not allow helicopters and fire planes to work efficiently … but we’re doing everything possible and impossible to put out this fire,” Gomes said, adding that no villages were currently at risk.

President Marcelo Rebelo de Sousa visited the site of the tragedy during the night and expressed his condolences.

The “situation is unfortunately atypical … ” he said. “It was not possible to do more than what has been done” in prevention and the immediate response.

But various local residents said they had been left to their own devices and had seen no firefighters for hours while their homes burned. Others complained about poor forestry reserve planning and depopulation of remote villages, which leaves many wooded areas unattended.

IFAB to discuss a ‘quiet revolution’ in laws of football