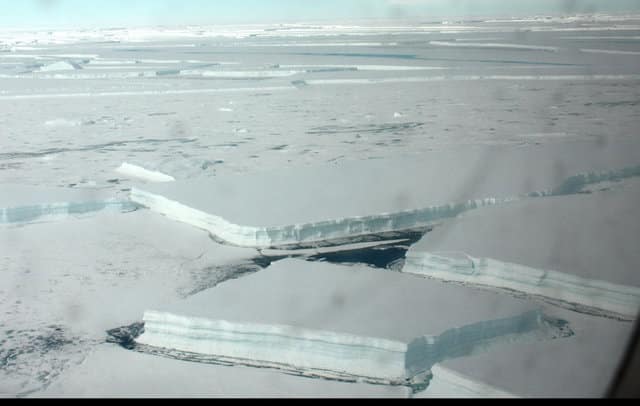 One of the biggest icebergs on record is like a “niggling tooth” about to snap off Antarctica and will be an extra hazard for ships around the frozen continent as it breaks up, scientists said on Wednesday.

An area of the Larsen C ice shelf, about as big as the US state of Delaware or the Indonesian island of Bali, is connected by just 13km of ice after a crack has crept about 175kms along the sheet, with a new jump last month.

“It’s keeping us all on tenterhooks,” Andrew Fleming, of the British Antarctic Survey, told Reuters of the lengthening and widening rift, adding “it feels like a niggling tooth” of a child as it comes loose.

Ice shelves are flat-topped areas of ice floating on the sea at the end of glaciers. The Larsen C ice is about 200 metres thick with about 20 metres jutting above the water.

Big icebergs break off Antarctica naturally, meaning scientists are not linking the rift to man-made climate change. The ice, however, is a part of the Antarctic peninsula that has warmed fast in recent decades.

“There is no other evidence of change on the ice shelf. This could simply be a single calving event which will then be followed by re-growth,” Adrian Luckman, a professor at the University of Swansea in Wales, told Reuters.

His team reckons the ice will break off within months, perhaps in days or years.

The ice, about 5,000 square kilometres, will add to existing risks for ships as it breaks apart and melts. The peninsula is outside major trade routes but the main destination for cruise ships visiting from South America.

In 2009, more than 150 passengers and crew were evacuated after the MV Explorer sank after striking an iceberg off the Antarctic peninsula.

Fleming said the Larsen C iceberg would add an extra pulse of ice and would be hazardous especially if smaller chunks reached usually ice-free areas in the South Atlantic, rather than staying close to Antarctica’s coast.

The Larsen B ice shelf nearby broke up in 2002 and some of the ice drifted into the South Atlantic towards the island of South Georgia, east of Argentina.

In 2000, the biggest iceberg recorded broke off the Ross ice shelf and was about the size of Jamaica at 11,000 square kms. Bits have lingered for years.

The loss of ice shelves does not in itself affect sea levels because the ice is already floating. But their disappearance lets glaciers on land slip faster towards the ocean, thereby raising sea levels.

Nasa estimates that the Larsen C ice shelf pins back ice on land that would add a centimetre to world sea levels, which have gained about 20 centimetres in the past century.

Paphos hotels to start fully recycling from next year