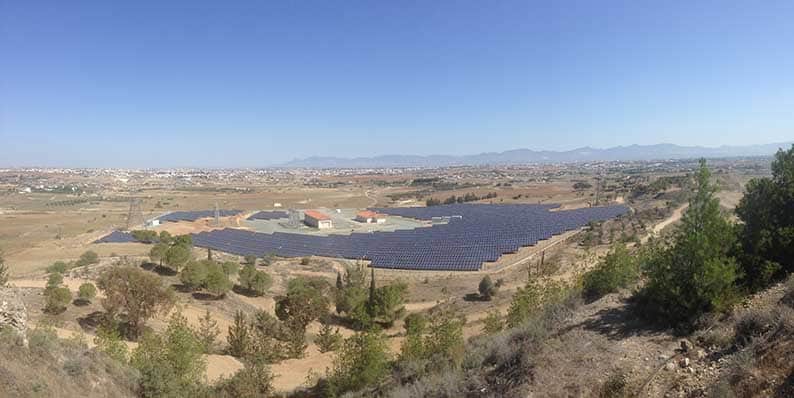 PLANS by the state-owned EAC to build he island’s biggest solar park in the Akrotiri area have stumbled upon objections from the government’s own environment service, saying the construction of the 20 megawatt plant would require extensive tree-cutting and will result in air pollution.

An environmental impact report prepared by the Agriculture ministry’s department was sent to the commander of the British base area of Akrotiri, claiming that the works for the photovoltaic park would affect the biodiversity and ecosystem of the area.

Furthermore, according to the report, some 4,500 mainly cypress and citrus trees would have to be cut down and air pollution would be caused during the works, in addition to solid waste.

The project is expected to cover an area of 353,143 square meters and would consist of 80 photovoltaic panels. It is located four kilometres from the residential centre of Akrotiri, very close to the British base’s airport.

EAC spokeswoman Christina Papadopoulou told the Cyprus Mail on Wednesday that the park would cover electricity needs for about 70,000 households and save around 1 million euros worth of fuel per year.

“The photovoltaic park will have a capacity of 20 megawatts. The largest park currently operating in the Tseri area near Nicosia has a capacity of 3MW, thus the park would also significantly contribute to energy saving,” she said.

The construction of the park is in line with the EU’s objectives for 2020, by when 16 per cent of electricity should be produced from renewable energy sources.

Papadopoulou explained that if the target is not reached within the specified timeframe, it is likely that EU sanctions would be imposed.

“The final approval for the construction of the park should be given both by the environmental committee of the Ministry of Agriculture, and the British bases. After approval, the park will need about two years to complete. Our goal is to operate it by 2020,” she said.

Regarding the concerns expressed by the environment department, Papadopoulou said that inevitably some trees would have to be cut down as it is an agricultural area, but more will be planted, adding that the EAC is open to proposals from the environmental department.

“Surely there will be compensatory measures. Approximately 4,000 trees will be cut down, but the EAC’s goal is to plant about 12,000 trees. This area is very close to the British base area of Akrotiri, thus security talks have taken place with the British bases that have agreed with the construction of the park,” she asserted.

“EAC will fund the project and lease the land from the Limassol Bishopric. The project will also benefit the local community, as construction jobs will be created that will be available for local residents,” she concluded.

Rocking festivals on Saturday in Nicosia