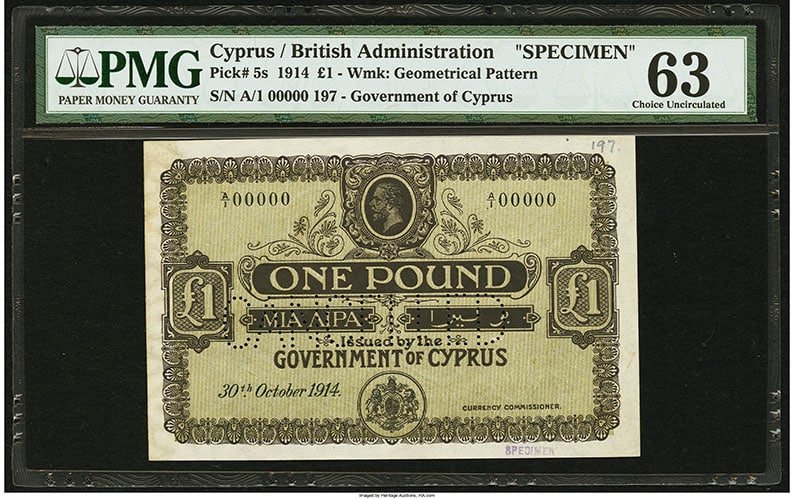 The auction of an important collection of Cypriot currency is set for September 8 in Long Beach, California.

Heritage Auctions announced the Ibrahim Salem collection of Cyprus was the finest offering of currency from the island to go to auction. The vast political changes in the last century have produced a wide array of notes, with stunning designs of monarchy and antiquity.

“Salem’s holdings from the Republic of Cyprus are unequalled,” the announcement from the auction house said.  “In addition to achieving some of the finest grades known for Cyprus, a large number of the issues from the 1960s into the 1990s are serial number 1 issues, including the first 250 Mils and 500 Mils notes printed and released.”

Before the 20th century, most of Cyprus’ money needs were filled by coins from the British Empire, Turkey and other countries in the area. By 1914, World War I was contracting coin supplies, and an emergency paper issue was released in Cyprus. That was the start of Cyprus issuing its own paper money.

The notes issued under the British authority include a number of highlights in this collection. Three specimen issues of the 1914 emergency Issue are included, each one expected to bring more than $20,000. The collection features many of the dates and denominations issued under King George V, all of which are incredibly scarce, including a rarely seen and fully issued 1936 £5 in PMG Very Fine 30.

According to the auction house, notes of King George the VI are rare in these grades, and rarely accompanied by so many specimen issues. One of the most desirable is the 10 Shilling Specimen from the 1952-53 Issue.

“Beginning with the first issues of Cyprus, Salem sought design and colour trials, specimens and proofs that represent interesting views of the design process. The trials from 1917-20 are extremely scarce, with each expected to command $7,000 or more. An unissued design trial featuring Makarios III, the founder of modern Cyprus, never was issued. It is expected to bring more than $4,000,” the Heritage Auctions statement said.

The collection can be found on the Internet’s popular auction-house website, HA.com, which has over one million registered bidder-members, and searchable free archives of four million past auction records with prices realised, descriptions and enlargeable photos.

Salem has been a banknote collector for more than 40 years. His passion for artistry and history led him into architecture and collecting. He is an architect in Dubai.