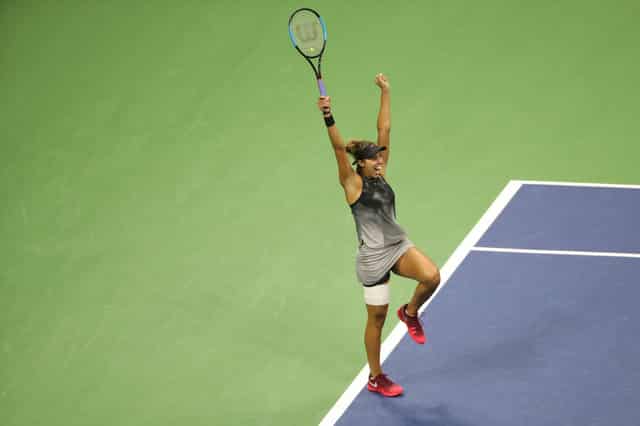 It will be the first time two American women have played for the title since 2002 when Venus lost 6-4 6-3 to her younger sister Serena Williams.

“I feels amazing, these are moments growing up you dream about,” said Keys. “It was one of those days where I came out and I was in a zone and forced myself to stay there.

“I had to rise to the occasion and I’m just happy to be in the final.

“Sloane is a new person right now, I think she is loving being out on the court again and she’s obviously playing really well.”

The final shapes up as an intriguing and unexpected one featuring two players who missed the start of the year as they recovered from injuries.

Keys, who was absent from the first two months recovering from wrist surgery, delivered an old fashion thrashing as she needed just 66 minutes to beat Vandeweghe, who also lost in the Australian Open semi-finals.

“She was playing a great first set,” said emotional Vandeweghe, breaking into tears during her post-match media conference.

“I thought at some point she might start running a little bit colder than what she was doing. I mean, it’s really not over until the last point.

“I was fighting as hard as I could for as long as I could, but she stayed hot the whole time.”

Keys came out swinging against the fellow power-hitter and broke Vandeweghe twice as she stormed into a 5-0 in a one-sided opening set that took only 23 minutes.

Keys continued to hammer away in the second set and the 22-year-old broke in the third game to ensure her momentum continued.

The only alarming moment came when Keys called for a medical time out while leading 6-1 4-1 and she walked off the Arthur Ashe Stadium court for treatment.

The 15th seed returned with her right thigh heavily taped but it had no affect on her dominance as she held serve and finished off a shell-shocked Vandeweghe in her next service game with an ace on the first match point.

“I definitely was starting to feel it and I was afraid if I went too far into a corner then something more serious could happen so I felt I needed to get it worked on sooner rather than later,” said Keys.

“I feel great right now, I don’t think I could feel better than I do now.”

Stephens, who returned to competition at Wimbledon after nearly a year off because of a foot injury, recovered from a second-set meltdown to end ninth seed Williams’s hopes of reaching a third major final this year.

“I have no words to describe what I’m feeling what it took to get here. The journey I took. I have no words,” said Stephens, who underwent foot surgery last February.

“If someone told me I’d make two semis and a grand slam final this year I would have passed out, which is what I feel like doing now.

Despite her lack of match play this year, Stephens began confidently and broke for 3-1 when Williams netted a routine forehand and then went on to win the last three games of the set as the 37-year-old strangely appeared to struggle with serve.

Williams was in danger again on her first service game in the second set but she managed to hold and broke in the next game thanks to a Stephens double fault.

She then held to love to stamp her domination on the second set and moved 4-0 up with a lovely service return followed by a routine volley as Stephens showed she was clearly struggling and lost the set to love when she hit yet another unforced error.

The 24-year-old, however, got back on track in the decider, taking a 1-0 lead on Williams serve when she netted an easy volley.

She saved two break points in the following game but Williams levelled for 2-2 when Stephens’s forehand sailed wide.

But at the end of a seven-minute game, Williams netted a routine volley again to give her opponent a break for 4-3.

Williams broke straight back with a service return winner and she saved a break point to hold for 5-4.

But as Williams struggled with her volley, Stephens broke for love in the 11th game and followed up on serve to close it out as Williams netted a backhand.

“It was definitely a contrast of play,” Williams said of the roller-coaster match.