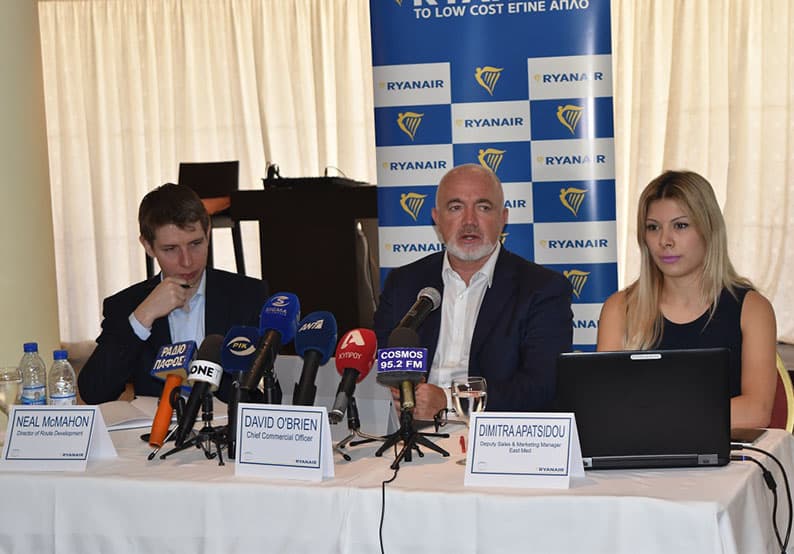 RYANAIR announced a slew of new flights for Paphos due to get underway next year, in the wake of a media storm concerning 2,000 cancelled flights on Monday.

To mark the launch of the airline’s Paphos summer 2018 schedule, Ryanair is offering a seat sale on their website from €19.99 for travel until December, available for booking until midnight Thursday.

On Monday, the Irish airline, Europe’s largest, said that it had loused up pilots annual leave and didn’t have enough pilots to operate all flights in the coming weeks. The airline has published full details of which of its flights are being cancelled between now and 28 October, around 40-50 a day.

“We screwed up, “he said, “we deserve the blame, we made a mistake and we’re sorry. We are going to compensate people in accordance with EU regulations; our rostering people attempted to give the pilots all of their annual leave in nine months, due to changes in our annual year.”

He said that the airline had simply given too much holidays to their pilots, but less than two per cent of passengers over the six-week or so period would be affected.

“Paphos and Larnaca are unaffected by these cancellation, we have tried to concentre our cancelations in airports where we have many other alternative flights or routes where we have higher frequencies, so that there are options for passengers,” he said.

However, he noted that its good news for Cyprus and Paphos, was that the airline planned to invest a further €100 million in Paphos, where it has its Cyprus base. With the arrival of a third aircraft, the airline is expecting a record summer in 2018. Ryanair also operates one flight out of Larnaca, to Brussels.

The airline announced that the seven new routes scheduled for Cyprus, were all in emerging markets, with the exception of Ireland and that the total now of 15 routes would deliver 800,000 customers per annum through Paphos airport next year. This represents a 45 per cent increase.

The new routes, which will fly two or three times a week using Paphos, are to Bratislava, Bucharest, Budapest, Dublin, Riga, Sofia and Tallinn

“These routes are mostly developing and new markets where employment is rising, unemployment is falling, disposable income is rising and these are the new source markets for tourism,” said O’Brien.

He said that Ryanair was helping to diversify Cyprus’ source market and also to attract different age groups. He noted that this was going to be a particularly strategic move ahead of Brexit.

O’Brien issued a stark warning to Cyprus regarding Brexit disruption to flights calling it, ‘highly likely’, noting that flights to and from the UK could be adversely affected and even brought to a halt.

“The problem with aviation is that we start planning our programme for 2019 early in 2018 and we will have to start to cutting back late in 2018 if there’s no certainty,” he said.

He warned that a hard Brexit would mean that there would be no rules in place covering flights between Europe and the UK, and if there were ‘no rules, there will be no flights’.

“I strongly recommend that the Cypriots put aviation at the forefront of discussions as Malta is doing, because the Germans and the French don’t care, and that will be a problem for the rest of Europe especially the smaller countries.”

He said that this would be a strong bargaining chip for Germany.

The Chief of Commercial Operations explained that there would be an absence of a policy, as the bilateral arrangements have been superseded, and that the airlines operate within the open skies framework within Europe.

“You can only enter it if you accept the decisions of the European courts of justice and the UK has said they are not accepting these decisions.”

He said that it’s conceivable that for a period of time in 2019 no-one will be able to fly from the UK to destinations including Cyprus, and advised that the Cyprus government should use their voice to push the topic firmly onto the agenda.

“Aviation is not covered by world trade organisation rules, and Lufthansa and Air France really don’t want Britain to be part of any open skies,” he said.

Regarding the new flights, Head of the Paphos hoteliers, Euripides Loizides and head of the Paphos regional board of tourism, Nasos Hadjigeorgiou, both expressed their support for the airline and assured they would do everything they could to ensure the continued success of Ryanair in Paphos.

This year Ryanair has carried 131 million passengers, they have 86 airport bases around Europe and fly to more than 206 airports. They now operate 400 aircraft, 1800 routes and offer more than 2,000 flights every day.

Stories of women told in theatre and dance