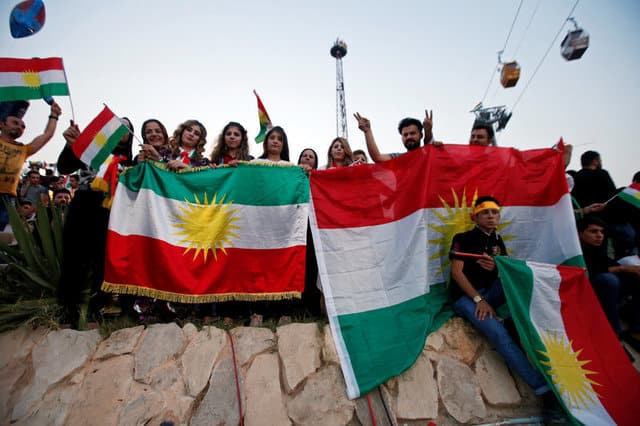 Kurds celebrate to show their support for the upcoming September 25th independence referendum in Erbil, Iraq

Turkey, home to the largest Kurdish population in the region, has warned that any breakup of neighbouring Iraq or Syria could lead to a global conflict, and is due to prepare a formal response on Friday, three days before the referendum.

Erdogan said the Turkish cabinet and security council would discuss Ankara’s options. They will “put forward their own stance on what kind of sanctions we can impose, or if we will,” he told reporters in New York, according to Anadolu news agency.

“But these will not be ordinary,” Erdogan said.

Iraqi Kurdish authorities have defied growing international pressure to call off the vote, which Iraq’s neighbours fear will fuel unrest among their own Kurdish populations. Western allies say it could detract from the fight against Islamic State.

On Monday, the Turkish army launched a highly visible military drill near the Habur border crossing, which military sources said was due to last until Sept 26, a day after the planned referendum.

Around 100 tanks and military vehicles, backed by rocket launchers and radar, deployed in open farmlands near the frontier, guns pointed south towards the Kurdish mountains.

The military buildup hit the Turkish lira, which weakened on Tuesday beyond 3.500 to the dollar, before recovering on Wednesday to around 3.465. But it has so far had little impact on lines of trucks queuing to cross into territory controlled by the Kurdish Regional Government in north Iraq.

Turkey, for years the KRG’s main link to the outside world, has built strong trade ties with the semi-autonomous region which exports hundreds of thousands of barrels of oil per day through Turkey to international markets.

Russian oil major Rosneft will also invest in pipelines to export gas to Turkey and Europe.

Erdogan did not spell out what sanctions Turkey might be considering, but truck drivers waiting at Habur on Wednesday said they feared for their livelihoods if cross-border trade, crucial to the local economy, dries up.

“I have four kids, I am 35-years-old, and there is neither a job nor a factory in the region,” said tanker driver Abdurrahman Yakti, who carries crude oil from Iraq to Turkey‘s Iskenderun Rafinery in the south-0eastern province of Hatay.

“We are stuck with this job. If this gate closes this would be our doom.”

Ferhat, who has transported dry cargo across the border for 10 years, said closing Habur would paralyse Turkey‘s southeast.

“It would not affect only people like me who work for 1,500 lira ($430 per month), but also the businessmen. We bring crude oil from Iraq, but just as many trucks are carrying goods from Istanbul and all around Turkey to Iraq,” he said.

The show of military force at the border and the threat of sanctions reflects the depth of concern in Turkey that Monday’s referendum could embolden the outlawed Kurdish PKK, which has waged a three-decade insurgency in Turkey‘s southeast since 1984.

The Turkish air force frequently strikes against PKK units operating from the mountains of northern Iraq, and limited detachments of Turkish infantry have made forays across the frontier in the past.

Turkey stationed troops in Bashiqa near Mosul, ignoring protests from Iraqi Prime Minister Haider al-Abadi, ahead of the military campaign to drive Islamic State out of the northern Iraqi city.

Ankara also sees itself as protector of Iraq’s Turkmen ethnic minority, with particular focus on the oil city of Kirkuk which Kurds seized in 2014 as Iraqi troops retreated in the face of Islamic State advances.

“We will announce our final thoughts on the issue with the cabinet meeting and national security council decision,” Erdogan said. “I think it would be better if they saw this.”