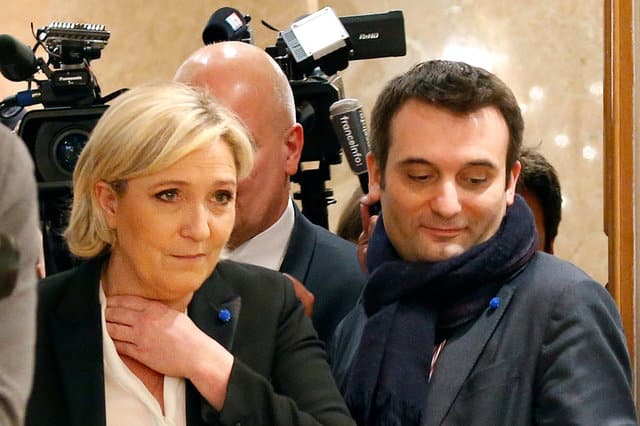 The right-hand man of French National Front leader Marine Le Pen quit the party on Thursday, raising the prospect of a split in the far-right’s ranks after Le Pen’s defeat in the May presidential election and months of internal feuding.

Florian Philippot, Le Pen’s closest aide and an architect of efforts to detoxify the party’s image, announced on French TV a departure that had looked increasingly inevitable in recent days.

His exit is expected to allow Le Pen to refocus on core policies around immigration and French national identity, while perhaps softening its anti-euro and EU-sceptic tone, which some blame for having damaged its showing in the election, when Le Pen was resoundingly defeated in the presidential run-off.

While Philippot’s departure is likely to increase turmoil in the party at first and others are expected to follow him out the door, the FN has survived similar crises in the past and analysts expect it to do the same this time. Philippot is seen as too divisive within the far-right to create a party that would be a serious threat.

Le Pen, who has shown a sometimes ruthless determination to hold on to power in the National Front, having already pushed out her father Jean-Marie, the founder of the party, withdrew Philippot’s responsibilities within the movement late on Wednesday, leaving him with little choice about his future.

“I’m not into being ridiculed, I’m not into having nothing to do. And so yes, of course, I’m quitting the National Front,” Philippot, 35 and a graduate of France‘s elite administrative school ENA, told France 2 television.

The National Front, which has made major inroads in local, regional and European elections over the past decade, will hold a congress in March where internal differences in the wake of its defeat to Macron and his new party are set to come to a head.

Since the election, the far-right had tried to portray itself as the main voice of opposition against Macron. But in recent weeks that mantle has been assumed by Jean-Luc Melenchon, the leader of the far-left La France Insoumise (France Unbowed), who is calling for mass demonstrations against Macron’s efforts to overhaul France‘s labour rules.

Appearing on France‘s RTL Radio on Thursday, Melenchon revelled in the turmoil on the far-right.

“Excellent, that’s their business. It’s perfect,” he said in reaction to Philippot’s departure. “It’s a party that counts for nothing. Those that were angry but aren’t fascists, I urge them to turn their back (on the FN) and come and join us.”

Jérôme Fourquet, an expert on the far-right at polling group Ifop, said Philippot’s exit would deprive the party of experienced policy writers, especially if others around Philippot follow him out the door.

But he said any exodus was likely to be limited and would take fewer top officials than Bruno Megret did when he left the party in 1988, when it was led by Marine Le Pen’s father. Megret created his own party but it never attracted many votes.

“Those who leave the FN or are pushed out all end up being marginalised,” Fourquet said.

Philippot joined the party in 2011 and rose quickly to become Le Pen’s chief adviser, drafting both the 2012 and 2017 election manifestos.

Sophie Montel, one of Philippot’s closest aides and an FN member for over 30 years, said on Twitter she was quitting the party. So did Maxime Thiebaut, another Philippot ally.

But other more high profile figures in the party rejoiced, including Le Pen’s partner Louis Aliot, who ridiculed Philippot.

“The FN will finally have some peace of mind away from a sectarian, arrogant, vain, extremist who was trying to muzzle our freedom to debate ” Aliot said on Twitter.

“He thinks he’s right about everything and… for me he’s an extremist,” he said later, speaking to RMC. “When you show him a poll that says 75 per cent of the French people don’t want to leave the euro, his reply is ‘we don’t give a damn, that’s where we are going.'”