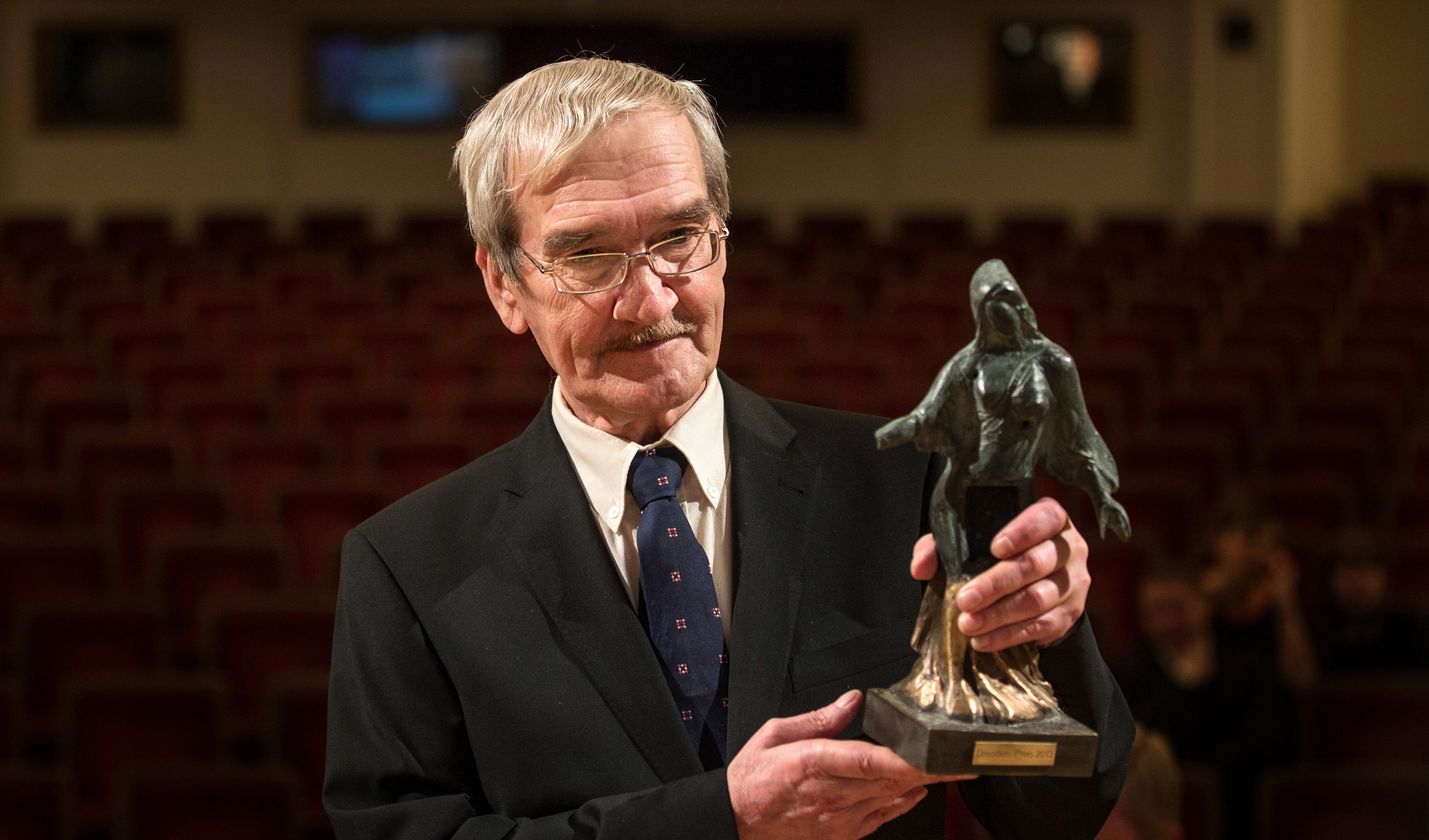 epa03588336 Former Soviet officer Stanislav Petrov holds the Dresden Prize at the Semper Opera, in Dresden, Germany, 17 February 2013. The prize presented by the organization Friends of Dresden is endowed with 25,000 euros. The 73-year-old former Russian soldier is credited with preventing a nuclear war on 26 September 1983. He judged an early warning system that erroneously detected a missile launch from the United States to be a false alarm and thereby is thought to have averted a nuclear holocaust. EPA/OLIVER KILLIG

Stanislav Petrov was never famous in Russia, just another forgotten pensioner, so the news of his death at 77 in Moscow on May 19 only recently reached other countries. He wasn’t all that famous abroad either, but people in the know think he may have saved the world from nuclear war.

“The siren howled, but I just sat there for a few seconds, staring at the big back-lit red screen with the word ‘Launch’ on it,” he told the BBC’s Russian Service in a 2013 interview. “I had all the data (suggesting that there was a US missile attack underway). All I had to do was to reach for the phone to raise the direct line to our top commander – but I couldn’t move.”

He couldn’t move because his screen was giving him reports from a Soviet spy satellite that five American Minuteman missiles had been launched at the Soviet Union. In the tense international atmosphere of September 1983, Soviet military doctrine was ‘launch on warning’: send a full retaliatory strike against the United States even before American nuclear weapons start to explode over Soviet missile silos and cities.

It was only three weeks since a Soviet fighter had shot down a Korean Air Lines flight and killed all 269 people aboard, including a US Congressman. Six months previously US President Ronald Reagan had called the Soviet Union an “evil empire” and called for a roll-back strategy that would “write the final pages of the history of the Soviet Union”.

The Soviet leadership was genuinely frightened, and had a view of Reagan not unlike that of the US government about Kim Jong-un today. They feared a surprise attack designed to destroy all of the Soviet Union’s nuclear missiles and bombers on the ground, and so had moved to ‘launch on warning’ mode. If Colonel Petrov reported what his screen was telling him, the machinery of Armageddon could start moving very quickly.

Stanislav Petrov didn’t report it. It was a new system, and it could be making a mistake. Besides, Petrov knew that you only get one chance at a surprise attack, so logic says you should launch all your missiles at once – more than a thousand of them, in the case of the United States. Launching just five would be beyond stupid. So he waited.

And waited, for 23 eternal minutes, to see if the Soviet Union’s ground radars also picked up the incoming missiles as they descended towards their targets. They didn’t. “I realised that nothing had happened. If there had been a real strike, then I would already know about it. It was such a relief.”

He was an ordinary man who did one extraordinary thing in his life, but think of the courage it took to ignore his orders, trust his judgement, and risk exposing his country to a surprise American nuclear attack. Think of what went through his mind in those 23 minutes. He was a hero.

No good deed goes unpunished, so Petrov was officially reprimanded for failing to describe the incident in his logbook. He was initially praised by his commanding officer for doing the right thing, but then it was realised that if he was rewarded, the senior people responsible for the system that produced the error would be punished. So he was sidelined, retired early, and subsequently had a nervous breakdown.

And the system error? The satellite had spotted a rare alignment of sunlight, reflected from the cloud-tops over the US Minuteman fields, that resembled missile launch tracks to its simple-minded image-reading device. There were several similar incidents during the Cold War – a US over-the-horizon radar once reported Moonrise as a mass missile launch – but this was the only one that happened when the relevant side was in launch-on-warning mode.

Given how full of bugs the missile-detection programmes of those days were, it’s remarkable that the United States and the Soviet Union got through 40 years of the Cold War unharmed. Full credit to the professionals on both sides who understood how grave the consequences would be if they got it wrong, and always relied on their own intelligence and experience when confronted with terrifying data from their machines.

Full credit too to the leaders who stayed calm and never actually threatened each other. Occasionally they declared the other side doomed by history – Nikita Khrushchev’s famous “we will bury you” comment in 1956, Reagan’s “write the final pages of (Soviet) history” speech of 1983 – but they were always talking about the other side’s economic and political defeat, not its nuclear annihilation.

Things are bit different now. Kim Jong-un’s lunatic threat to “sink” Japan and reduce the United States to “ashes and darkness” with his handful of nuclear weapons, like Donald Trump’s all-too credible threat to “totally destroy North Korea” (that’s 25 million men, women and children barbecued, irradiated or simply vaporised, if he means what he says), go far beyond the language that was used during the Cold War.

It would be reassuring to know that the professional military on both sides, at least, are as responsible and grown-up now as they were then. Alas, we don’t even know that.

We are all Cosmopolitans