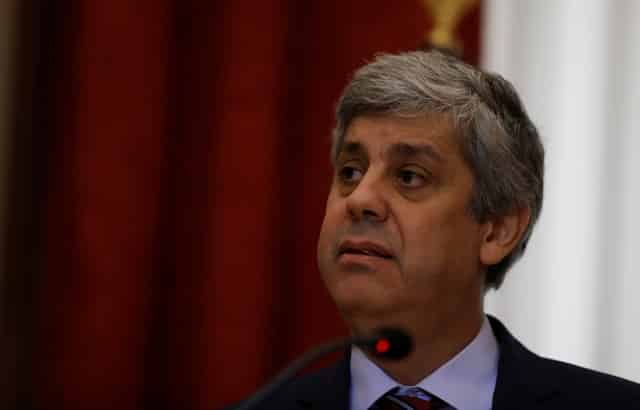 Finance ministers from Latvia, Luxembourg, Portugal and Slovakia bid on Thursday to replace Jeroen Dijsselbloem as the powerful head of eurozone finance ministers, the Eurogroup, ahead of a vote next week among the 19 countries sharing the euro.

The president of the Eurogroup chairs monthly meetings of finance ministers and heads the eurozone bailout fund which has saved Greece, Ireland, Portugal, Spain and Cyprus from bankruptcy during the sovereign debt crisis.

The decision is expected to be taken on Monday.

The current Eurogroup chairman, Dutchman Dijsselbloem will step down on Jan 13 after two terms since 2012. He is no longer a finance minister after Dutch national elections earlier this year.

European socialists, of which Dijsselbloem is one, have been calling for the job to remain with a socialist because the European centre-right already has many of the top EU jobs, such as European Commission president.

Centeno is a socialist and has the backing of Italy, whose own finance minister Pier-Carlo Padoan also wanted the job, but dropped out because it is not certain he will stay in government after Italian elections due by May 2018.

The Harvard-educated economist has led Portugal during a strong recovery from the country’s 2011-14 debt crisis and bailout. The country is growing at its fastest pace in at least a decade and the budget deficit is set to fall to its lowest in many decades.

In May, former German finance minister Wolfgang Schaeuble dubbed Centeno the “Ronaldo of EU finance ministers” – a reference to the Portuguese football star – as Portugal was about to exit the EU’s disciplinary procedure for running excessive deficits.

Some in the Eurogroup say, however, say a minister from a country that had to be bailed out because of past policy mistakes would have smaller chance of getting the job. Many also say that Centeno has not contributed much to Eurogroup discussions in the past.

Slovakia’s Kazimir, also a socialist, has run a tight fiscal ship at home and has been hawkish on bailouts for Greece. Some officials say that among socialist candidates he would have the backing of Germany and the Netherlands.

Critics of his candidacy, however, say that he has not taken the opportunity of Slovakia’s European Union presidency to drive his economic agenda harder and show leadership.

Gramegna is a liberal and has more a centrist stand, although some colleagues have criticised his view on EU cooperation on taxes. Tiny Luxembourg also already has the prestigious position of European Commission president.

Reizniece-Ozola, 36, is the only female candidate and her party associates itself with the European centre-right, rather than socialists, which could win her the support of centre-right finance ministers. She is a chess grandmaster.

Her critics however, also mention that like in the case of Centeno, she has not been very vocal in Eurogroup meetings so far and that she had campaigned against Latvia’s adoption of the euro in 2014.

In an interview with Latvian Television in March 2015 she said “she still hasn’t changed her mind” about Latvia joining the euro.