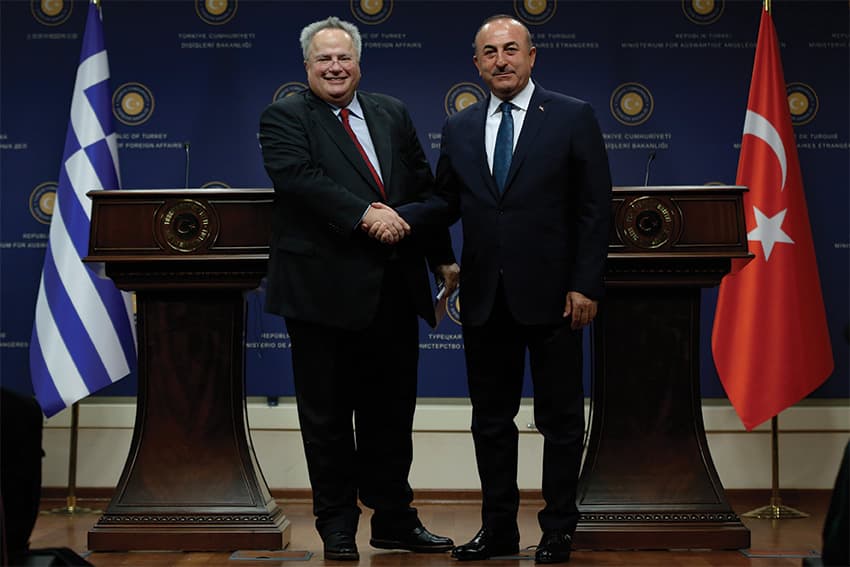 As Turkish President Recep Tayyip Erdogan’s visit to Athens at the end of next week draws nearer, hopes are high that it will shed some light on Turkey’s intentions regarding the stalled Cyprus problem negotiations – a subject certain to come up in talks with Greek Premier Alexis Tsipras.

Erdogan is scheduled to arrive in Greece on Thursday for a two-day official visit, the first by a Turkish head of state since that of Celal Bayar in 1952. Of course, the staggering 65-year gap between such an official visit of a Turkish president is a semantic one, since Erdogan has been on official – and unofficial – visits to Greece before, not as president but as prime minister.

The visit comes at a low point in relations between the two countries. The Greek state’s refusal last year to hand over eight Turkish army officers, who sought political asylum in Greece after the failed coup against Erdogan in July 2016, was followed by the failure in the international Conference on Cyprus in Switzerland last July, when Greece blamed Turkey’s intransigence while Turkey assigned sinister motives in scuppering prospects of a deal to Greek Foreign Minister Nicos Kotzias.

In the latest episode, Greece’s participation in a trilateral meeting with Cyprus and Egypt (with another to follow with Cyprus and Israel next month), seemed to have put a sizeable dent in the two countries’ diplomatic rapprochement over the last two decades.

Even so, in an interview on Friday, Kotzias – the one to formally extend the invitation for Erdogan’s visit in October when he was in Turkey to meet with his Turkish counterpart Mevlut Cavusoglu – said “the most important thing is to keep communication channels open and talk about our problems”.

Announcing the invitation in October, Kotzias, thought by many in Greece and Cyprus to be one of the few beacons of resistance against the Turkish expansionist agenda, described Erdogan as a “great leader of the neighbouring country”.

“Although Greco-Turkish relations are not at their best, there is an effort by both sides to maintain a positive climate that will allow co-operation in various fields, despite bilateral differences,” post-doctoral researcher at the University of Cyprus and co-author of a book on Turkey’s role in the Eastern Mediterranean Zenonas Tziarras told the Sunday Mail.

“There are several important issues that will likely be the topic of talks between Alexis Tsipras and Recep Tayyip Erdogan, including the issue of western Thrace, the refugee crisis, the Cyprus problem, the trilaterals, the issue of the eight Turkish officers, and the recent arrest of nine Turkish nationals in Athens on suspicion of belonging to the Turkish terrorist organisation DHKP-C,” he said.

Among these, the Cyprus problem stands out as the one most likely to be substantially impacted by any kind of breakthrough during the visit.

Since the dramatic breakdown of the international conference at Crans-Montana over the security and guarantee arrangement in a reunified Cyprus, communication between the two sides – on the island, between the Greek Cypriots and Turkish Cypriots, as well as between proxies Greece and Turkey – broke down completely, with public remarks limited to assigning blame.

The visit might be the first time an effort is made to pick up the pieces and return to the negotiating table, even if Greek Cypriot and Turkish Cypriot elections – both scheduled for January – preclude the possibility of resuming dialogue before February.

“It is certain that the Cyprus problem will be discussed [during the visit],” Tziarras said.

“The Erdogan visit could prove crucial if it gives indications of Turkey’s intentions with regard to the Cyprus problem talks. That is, on whether Turkey would be receptive to a new round of negotiations – or even an international conference within 2018 (and under what conditions) – or whether it will opt for a more rigid stance. In any case, it is quite likely that Turkey will eventually consent to restarting the talks, whatever the outcome turns out to be.”

President Nicos Anastasiades has repeatedly professed his readiness to attend a new Conference on Cyprus, picking up where things left off at Crans-Montana – on the caveat that this one is “well-prepared”, unlike the last one. Turkey has yet to express such readiness, but Anastasiades’ view is also being challenged at home, where various critics – most vocally, presidential candidate Nicolas Papadopoulos – claim he should withdraw all the concessions he has offered and seek a more assertive strategy. This, he argues, would force Turkey to reassess its position on Cyprus by ratcheting up the economic and political cost of occupying the northern part of the island.

“[Papadopoulos’] new strategy aims to create economic, political and diplomatic cost for Turkey, with a view to creating the conditions to seek a solution to the Cyprus problem,” Papadopoulos’ campaign director Chrysis Pantelides said earlier this week.

Such a strategy would fly in the face of an overarching policy of seeking the peaceful and mutually beneficial resolution of bilateral differences established over the last two decades between Greece and Turkey, to which Cyprus also subscribes. This is best exemplified by unequivocal support from both countries for Turkey’s accession to the European Union.

As late as mid-October, after meeting with US President Donald Trump in Washington Greek Premier Alexis Tsipras reaffirmed the country’s stance toward Turkey’s accession.

“I repeat that Greece supports Turkey’s European prospects and call on her to remain focused on its European policy,” the Greek Premier said.

However, while once considered a promising endeavour, Turkey’s accession course has faltered and lost popular support in recent years, with Erdogan seen by the Europeans as descending to autocracy by cracking down on political opposition and the EU seen by Turks as bluffing with EU accession in order to get its way with Turkey.

“When we refer to political cost, we are not talking about Turkey’s European prospects, which is too far away into the future, vague and generic,” Pantelides said.

“What we are referring to is, for example, the freezing of accession chapters, from the moment Turkey is refusing to meet any of its obligations to the Republic of Cyprus. It is, for example, our refusal to upgrade the customs union between Turkey and the EU, which would cost the Turkish economy around €17.5 billion annually.”

But even if Cyprus goes down the path of taking the war away from the military to the political and economic arena, there are no guarantees it would find any followers, though Pantelides cited a dubious doctrine between Greece and Turkey with regard to the handling of the Cyprus problem, according to which “Cyprus decides and Greece supports”.

Tziarras said such a manoeuvre would be an irresponsibly risky move.

“The views of causing cost to Turkey are, in any case, baseless and unfounded,” he told the Sunday Mail.

“Using Cyprus’ EU membership to this end would, first and foremost, crash into Turkey’s disinterest for EU accession. It would also bring Cyprus at risk of becoming a ‘nuisance’ or a ‘problem-child’ for other EU member states, who, even if they do not wish to see Turkey become a full member of the union, wish to maintain economic, commercial and other security relations with Ankara.”

Technically, Cyprus may have the capability to interfere with these delicate relationships by cranking up the pressure on Turkey, he added, but this would be “extremely risky from a political standpoint”.

“Athens is willing to back Nicosia’s negotiating proposals and maintain an assertive stance on security and guarantees, in which it is a player. However, EU-Turkey and Greco-Turkish relations are matters that go well beyond the Cyprus problem, touching on Greece’s interests and its policy on Turkey. This is why Greece would be very careful and hesitant if Cyprus were to drastically shift its stance toward EU-Turkey relations.”

Indeed, Kotzias, in his Friday interview, said that the view that Greece should not engage in discussion with the countries it has problem with “reflects an isolationist policy, which is antiquated and has no place in an era of open horizons and globalisation”.

Gardening: A time to take stock

Our View: Money at the root of our subservience to Russia