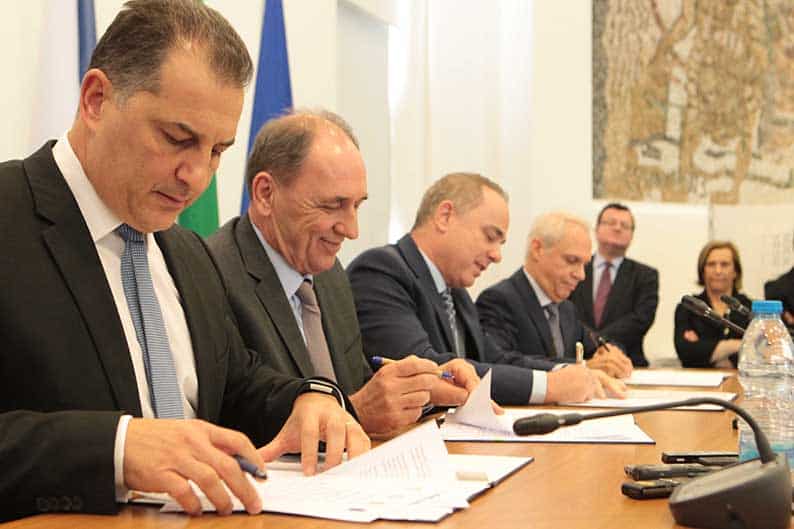 File photo: Energy Minister Yiorkos Lakkotrypis (left) with the ministers from the three other countries at the signing ceremony last December (Christos Theodorides)

Cyprus, Italy, Greece and Israel agreed on Tuesday to back the construction of a gas pipeline from newly discovered fields in the eastern Mediterranean to Europe.

The project, known as East Med, involves a 2,000km long pipeline to channel offshore reserves in the Levantine Basin in the far east corner of the Mediterranean to Greece and Italy, at a cost of up to 6 billion euros.

The eastern Mediterranean has produced some of the world’s biggest gas finds in the past decade, and much of it is still thought to be untapped at a time Europe is looking to diversify its gas resources for reasons of energy security.

“Today we have concluded a very significant milestone, which is the signing of a memorandum of understanding which outlines the political commitment of the four countries to pursue this project,” Cypriot Energy Minister Yiorgos Lakkotrypis said during a signing ceremony in Nicosia with counterparts from Greece Giorgos Stathakis and Israel Yuval Steinitz and by the Ambassador of Italy in Cyprus Andrea Cavallari. The Italian energy minister did not attend due to a technical problem with his flight.

The pipeline, Lakkotrypis said, was a “very important pillar” in the eastern Mediterranean natural gas corridor.

The four countries also said they would cooperate to facilitate studies, permits, construction and operation of the project, with a view to signing an Intergovernmental Agreement on the project “within 2018”, a joint statement said.

It is estimated the pipeline could transport up to 16 bcm of gas per year. The project owners are IGI Poseidon, a joint venture between Greece’s natural gas firm DEPA and Italian energy group Edison.

Stathakis said “today we are making a major step forward in a project that Greece supported right from the beginning, considering it to be strategically very important for Europe,” as it will bring benefits to both producers and consumers in Europe.

Noting that the EastMed pipeline project is financially and technically feasible, Stathakis said Greece could also become a potential producer as “there is a development on new contracts for exploration and a new tender process has been initiated”.

Steinitz said significant progress was achieved by all parties since the initial meeting was held seven months ago in Tel Aviv and that they want to start this major project as soon as possible.

“I was also very encouraged by the details and the statements made by the European Union, the Energy Commissioner, the representatives and the consortium about the technical and economic feasibility of the project,” he said. “It looks like a fantasy, as a dream, because there is no parallel, there is no such long and deep underwater gas pipeline in the world, and now, we can understand that this is possible, viable and a good project.”

Cavallari confirmed Italy’s full support to the development and implementation of the EastMed pipeline project, which is considered strategic, both from national and regional point view, he said.

A joint statement after Tuesday’s signing said the MoU and the quadrilateral discussions held, “confirmed our intention to cooperate in enabling and enhancing the development and the implementation of the EastMed Pipeline Project, as a viable and strategic option and an infrastructure of special interest for gas producing States and the EU”.

It added that the project would secure a direct long-term export route from Israel and Cyprus to Greece, Italy and other European markets as an additional element of the Eastern Mediterranean Corridor, thereby strengthening EU’s security of supply, while promoting competition among gas suppliers.

“We also expressed our willingness to cooperate in order to facilitate the necessary studies, the permitting, the construction and the operation of the project,” the joint statement said.

In this respect, the Working Group consisting of the Directors General of the respective energy ministries would continue to hold meetings with the mandate to discuss, inter alia, the provisions of an Intergovernmental Agreement (IGA) between Cyprus, Greece, Israel and Italy with the objective of signing the IGA within 2018.

The parties have set a target of 2025 for completion of the project.

It will be paid for at least in part with money from the EU under the Connecting European Facility programme.

The initial estimate of the cost of the pipeline, which will be able to convey 12-16 bcm of gas annually, is $5.7 billion.