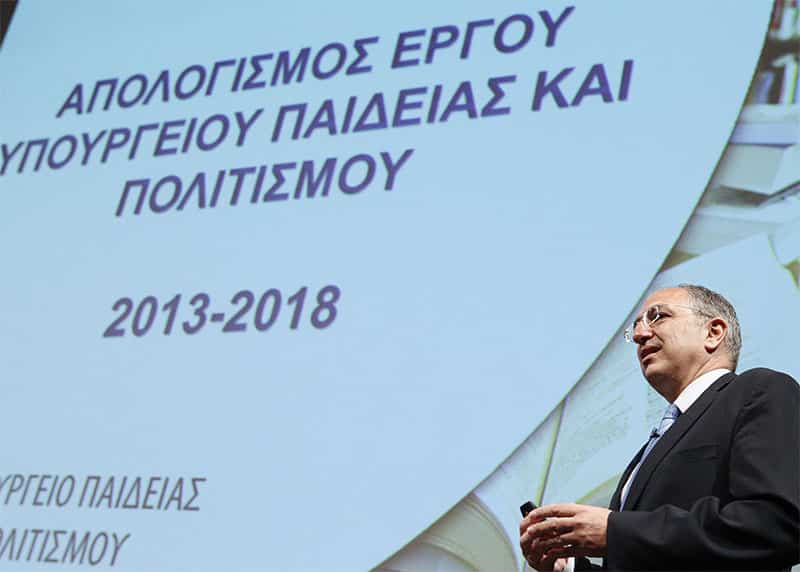 The education ministry’s activities from 2013 until 2018 were carried out under the motto ‘We dared, we planned, we built’, minister Costas Kadis said on Tuesday outlining what the ministry has and will do during that time.

“We dared to make reforms, we dared the hard and the new way, having faith in the change that our young people, our society and our place need so much,” he said.

Central reforms have been made, including the new application system for teachers, the modernisation of curricula and the introduction of new courses in high schools.

As well, there are now vocational training programmes for teacher and new school regulations which, according to Kadis, have led to a 15 per cent lower absenteeism in the current school year.

Referring to special education, he said a series of actions have been undertaken, such as increasing the numbers of staff and upgrading equipment for the disabled. The plan is to build a special school in Limassol which meets all international standards to meet the needs for this group of children.

Regarding higher education, the minister noted that efforts to make Cyprus into an international educational and research centre have borne fruit, since the number of foreign students in Cypriot universities has increased from 8,375 in 2012 to 21,093 in 2017.

He welcomed the decision of the Cabinet to create an Academy of Sciences, Literature and Arts, saying it is “of historical significance”.

Important projects have been carried out to improve cultural infrastructure, which are expected to enhance the cultural development of the country.

A package of pioneering programmes aimed at empowering young people is high on the priority of the ministry, and money for this has already been included in the state budget.

In his speech Kadis welcomed the adoption of legislation to combat the fixing of sports matches last week by the House of Representatives and the launch of the first code of good governance in sport. He added that 19 sports infrastructure projects, including the new stadium in Limassol, were promoted.