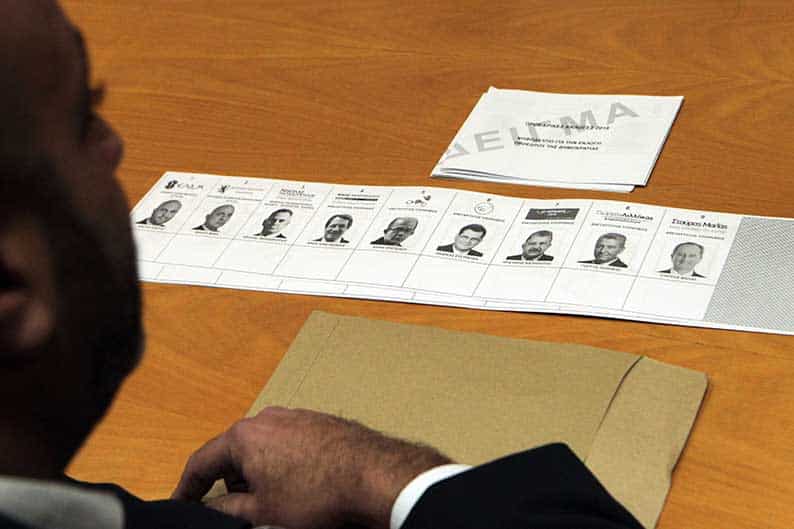 A LACKLUSTRE presidential campaign turned contentious on Saturday after two legal challenges were mounted over draft ballot papers printed earlier in the day.

Less than 24 hours after nine presidential hopefuls submitted their candidacies, three, two of them main contenders, called on the state’s legal service to weigh in on their objections to what was on the ballots.

A legal opinion from the attorney-general’s office will be sought on Tuesday, the election service said.

Candidate Haris Aristidou complained that his election slogan ‘Handcuff Thieving Politicians’ was not visible enough in the space under his name on the ballot paper. It was represented by a symbol.

All three camps made their objections known on Saturday during a meeting with Deputy Chief Returning Officer Demetris Demetriou who met representatives of the main hopefuls and some of the independent candidates themselves, including Aristidou. The meeting at the interior ministry was to present them with the draft ballot papers for the January 28 round of the elections. If there is no clear winner, the vote will go to a run-off on February 4.

Demetriou said he had already informed the AG’s office on the issue and that the elections service would send them a written request a legal opinion on Tuesday. The official ballot papers are due to be printed on January 7.

Aristidou, Demetriou said, filed a complaint “despite already knowing from the start what the specs were for the slogan”.

Along with Aristidou Malas and Anastasiades, the other candidates are

Far-right Elam’s Christos Christou, the head of the Justice Party Michalis Mina, Diko leader Nicolas Papadopoulos who is backed by Edek, the Greens and the Solidarity Movement, leader of the Citizens’ Alliance Giorgos Lillikas, and independents Andreas Efstratiou and Christakis Kapiliotis.

The five candidates backed by parliamentary parties agreed to participate in a debate set for January 22 which will be hosted by state broadcaster CyBC, and will also broadcast live on the other main TV stations; ΑΝΤ1, Sigma, TVONE and Alpha.

Also on Saturday the election service announced that a total of 38 voting centres would operate abroad. Greece will have 15 centres, five in Athens, three in Thessaloniki and one each in Volos, Heraklion in Crete, Ioannina, Komotini, Larissa, Patras and Rethymno.

In the UK 10 centres will be open, three in London at the Cypriot High Commission, two at the London Cypriot community centre, and one each in Glasgow, Leeds, Manchester, Birmingham and Bristol.

Around the rest of Europe, there will be one centre opened in Berlin, Vienna, Brussels, Paris, Prague, Sofia, Stockholm and in The Hague.

Elsewhere in the world, voting centres will be open in New York, Dubai, Doha, Riyadh and Manama in Bahrain.