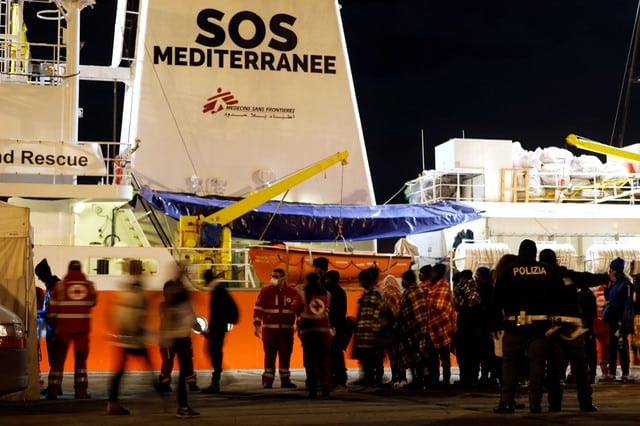 File photo: Migrants disembark from the MV Aquarius after it arrived in Augusta on the island of Sicily

The European Union’s border agency Frontex launched a new Mediterranean operation called Themis on Thursday, removing the obligation of the previous mission to bring rescued migrants only to Italy.

Italy has repeatedly lamented a lack of EU solidarity in managing immigration. The previous Frontex operation, called Triton, required all those rescued at sea to be brought to Italy even if another EU country, such as Malta, was closer.

“Triton said that whomever rescued would be taken to Italy,” said Izabella Cooper, a spokeswoman for Frontex. “Themis leaves the decision on disembarkation to the (country) coordinating a particular rescue.”

Triton was a Greek god and the messenger of the sea, while Themis was the goddess of divine law and order.

Since Italy coordinates the vast majority of sea rescues between North Africa and its southern coast, the new rule is unlikely have a large impact on arrivals, though it does send a political message to Mediterranean neighbours like Malta.

With more than 600,000 migrants landing on Italian shores in the last four years, a popular backlash is building ahead of a March 4 national election, and the centre-left government is under pressure to show it has the situation in hand.

“Operation Themis will better reflect the changing patterns of migration, as well as cross border crime,” Frontex Executive Director Fabrice Leggeri said in a statement. “Frontex will also assist Italy in tracking down criminal activities, such as drug smuggling across the Adriatic.”

The one-year mission will be re-evaluated every three months and will, unlike Triton, include Italy’s southern Adriatic coast. While the operational area of Triton extended about 30 miles from the Italian coast, Themis vessels typically will not patrol further than 24 miles from the coast.

While Triton was not a search-and-rescue operation, it has assisted in the rescue of 38,000 people since 2014. Themis vessels, of which there will be more than 10 operating in the summer, will also carry out rescues if asked, Cooper said.

No rescued migrants will be taken to non-EU countries, like Libya or Tunisia, she said.

Italian newspapers suggested on Thursday that migrants would be taken to the “closest port”, but Cooper said international maritime law, which foresees they be taken to the nearest “place of safety”, would continue to be followed.

In January, 4,256 migrants reached Italy by sea, a 6 per cent decline on the same month last year. Arrivals from Libya, where most people smugglers operate, were down almost 26 per cent.

Italy sealed a deal a year ago with the United Nations-backed government in Tripoli to provide aid, equipment and training to help Libya fight smuggling.

Arrivals plummeted by two thirds during the second half of last year as armed groups cracked down on trafficking from Sabratha, a smuggling hub, and as the Libyan coast guard intercepted an increasing number of boats.

Aradippou to turn manure into energy