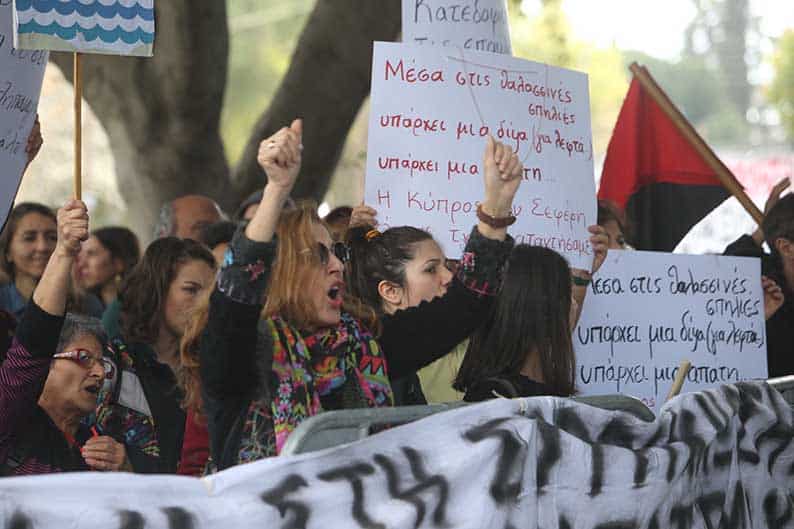 Protesters outside the House of Representatives on Wednesday (Christos Theodorides)

Scores of protesters gathered on Wednesday outside parliament during President Nicos Anastasiades’ swearing in ceremony in a bid to remind the president and his administration of their obligations to preserve the environment.

The protest, organised by Save Akamas/Save Cyprus initiative and supported by a large number of environmentalist groups, was sparked by the construction of villas in the Peyia sea caves area, a birthing habitat of the Mediterranean monk seal (Monachus monachus), which is an endangered species.

Top of the lists of concerns are the threats from development projects to Cyprus’ Natura 2000 sites which are part of the network of nature protection areas within the European Union.

Around eighty protesters also gathered at the sea caves area in Peyia at the same time.

The peaceful protest took place close to one of the villas being built almost over the marine protected area of the sea caves below.

The protesters outside parliament carried banners and chanted slogans ‘Hands off the Akamas,’ ‘SOS sea caves’, and ‘Akamas belongs to our children’.

Protesters said they were calling on the government to step up and prioritise the environment.
“We claim our right and that of our children for a clean environment, an environment for all,” said Yiannis. He added that the protest was sparked by the recent development at the Peyia sea caves.

“This is not a development (the construction of villas) in the best interest of the environment, but for other interests. I believe we represent a large part of Cyprus residents who want to live in a beautiful country,” he said.

A woman with a cardboard mask with the face of Paralimni mayor, Theodoros Pyrillis, holding a toy bulldozer, said she was protesting against the mayor’s actions over several beaches in his area.

Protesters said they wanted the new government to know that they would not tolerate the continual violation of people’s rights to a clean environment nor the destruction of its natural heritage.

“We are not here just for the sea caves, but that was the last straw,” said Maria Hadjimichael, member of the Save Akamas group.

She added that the last five years had seen a constant violation of national and European legislation on the environment.

“We are here for entire of Akamas, the Hanoutaris Cliffs where for the last two years there has been an illegal farm built by Kykkos monastery, the illegal quarry action in Androlikou, the Akamas master plan, the illegal interventions we see daily at the Protaras beaches, the Ayia Thekla marina, which is in protected area,” she said.

“We are here to let them know we will not allow this to continue”.

“I am against developing the environment for hotels and tourist places,” Dada Gunamuktananda said.

Speaking on behalf of the Ananda Marga yoga and meditation group, he said that humans “should have a very harmonious relationship with the environment and we should preserve this natural and beautiful spaces as much as we can”.

Jobs, he said, can be provided in so many different ways.

The Save Akamas group said they expect that the provisions of the EU directives and the Cypriot legislation on nature conservation will be respected ‘without any rebates, deviations and loopholes’.

They also call for proper assessment of all projects and programmes concerning areas near or within Natura 2000 sites and which are likely to have significant negative impact before granting planning and building permits. 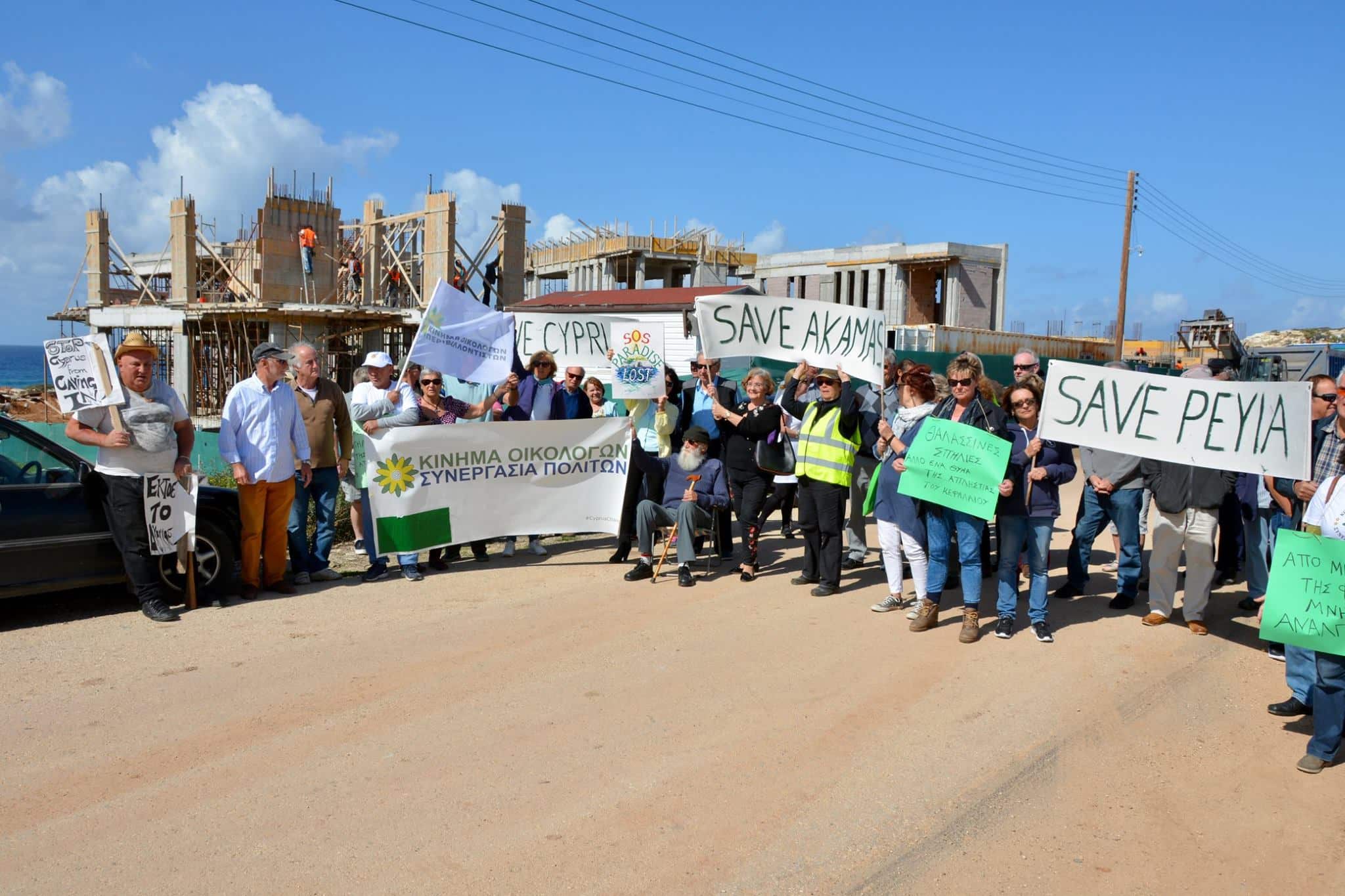 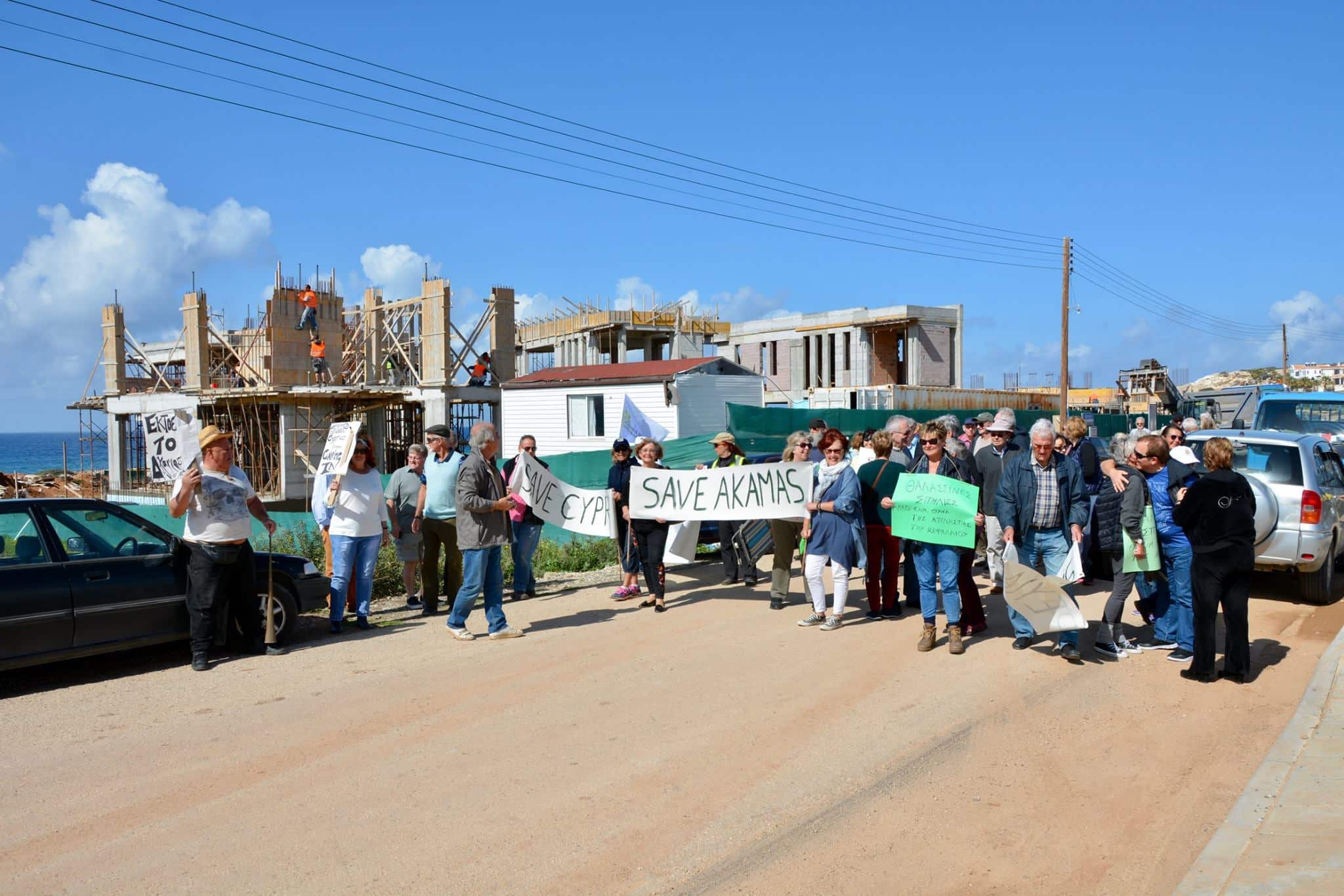 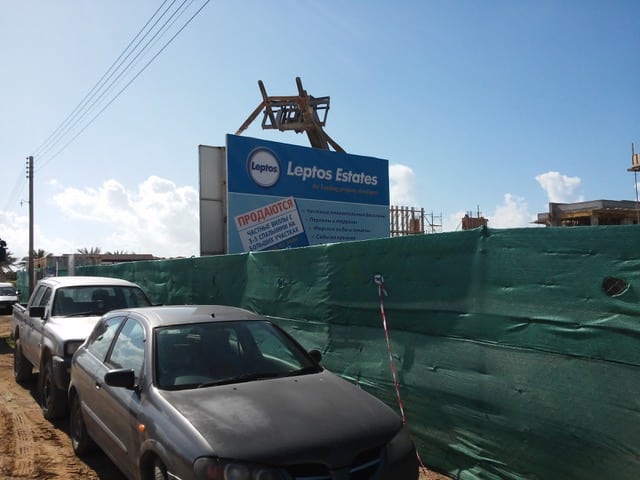 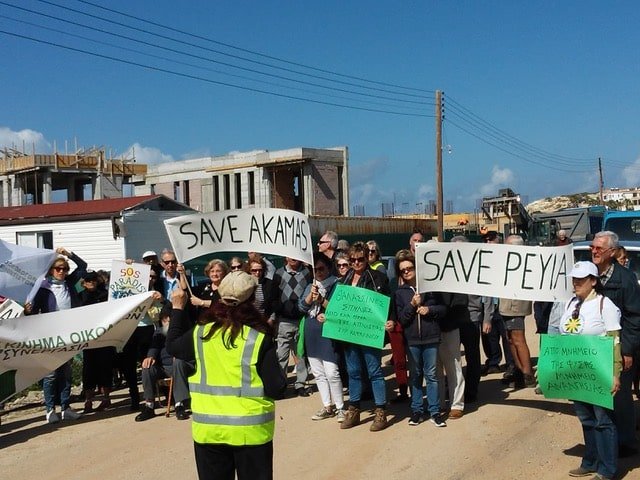 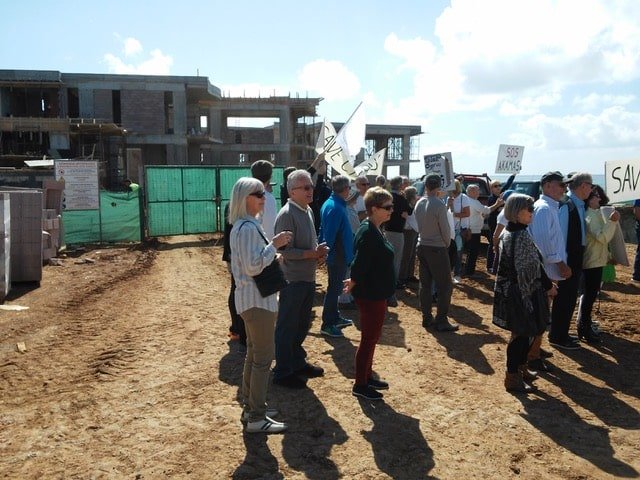 [/smart-photo]
“It seems that there have been clear violations of EU environmental protection legislation which Cyprus is obliged to implement,” said Linda Leblanc, the Peyia councillor who organised the Paphos protest.

In an announcement later on Wednesday, the district Paphos town planning department said the villas above the sea caves covers six properties which fall into a development zone in Peyia which require a 15 per cent building coefficient and a maximum of two floors.

“This land item is largely affected by the beach’s protection zone and neighbours Natura 2000 areas.”

According to the announcement, the application procedure was adhered to and two planning permits were granted to the owning company. One concerned converting the field into a plot and the second, the construction of six holiday homes, as is required by law.

Before the permits were granted, all authorities involved including the environment committee, game fund, water development board and the Peyia municipality, positively decided in favour of the project.

A second demonstration will take place in the sea caves area on Sunday at around 11.30am and will see a bus load of Green Party members and other environmentalists travel from Nicosia and Limassol to add their voices to the cause. 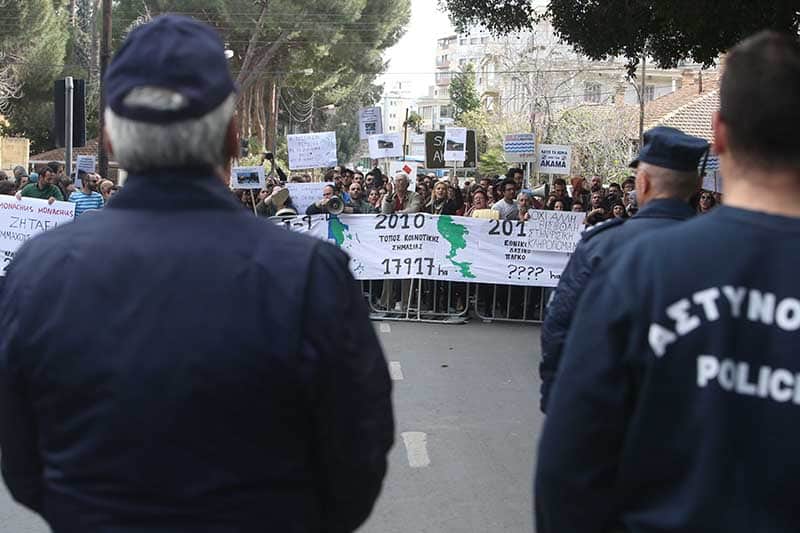 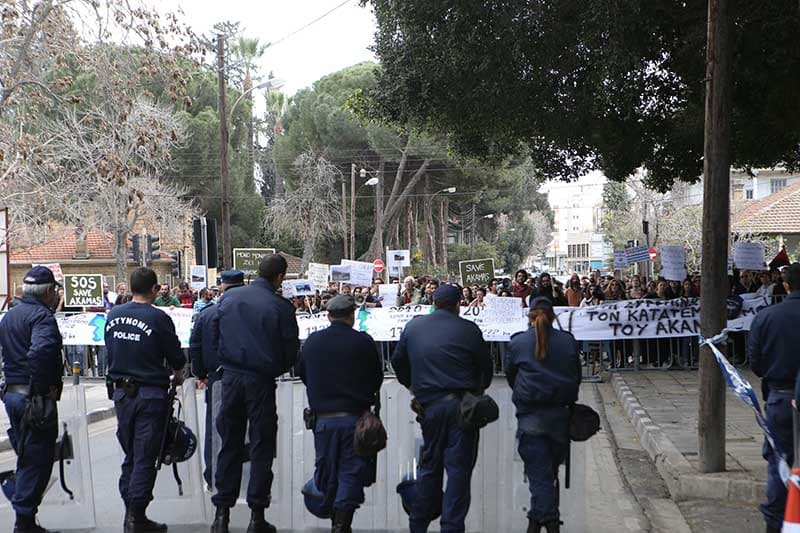 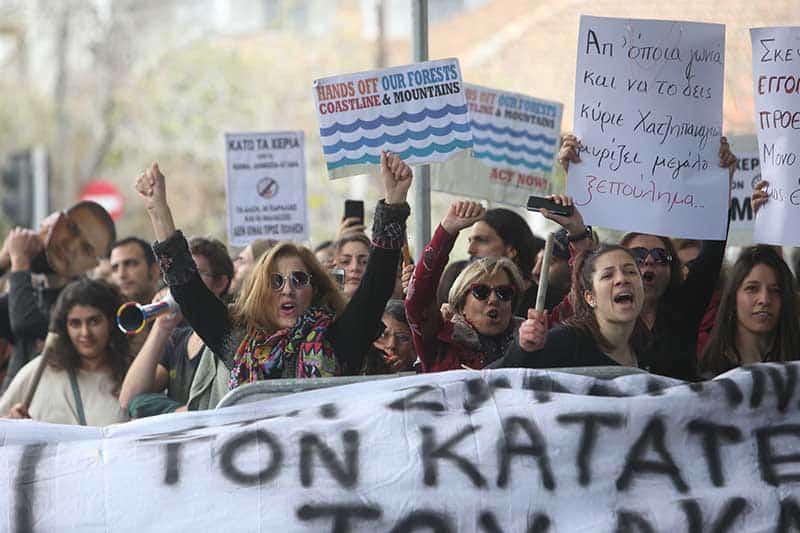 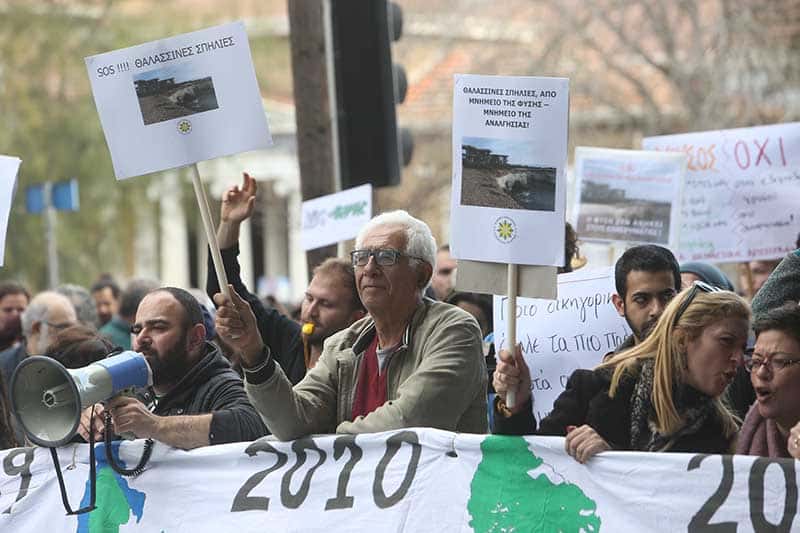 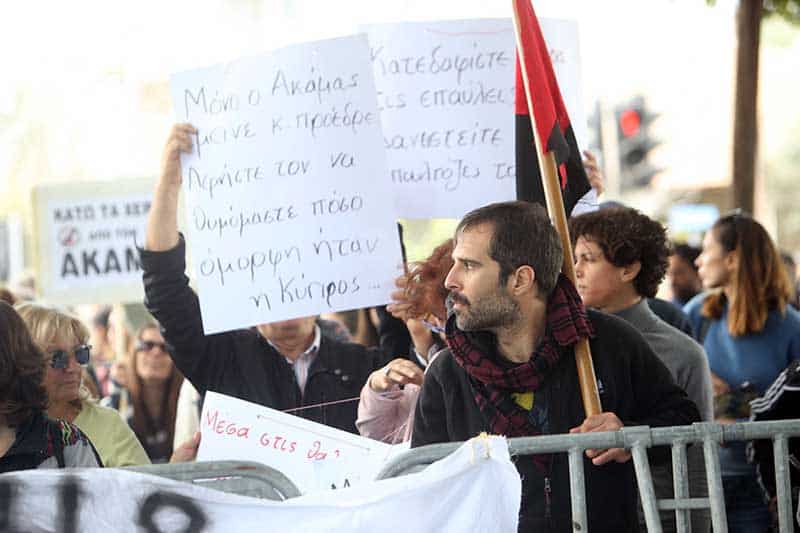 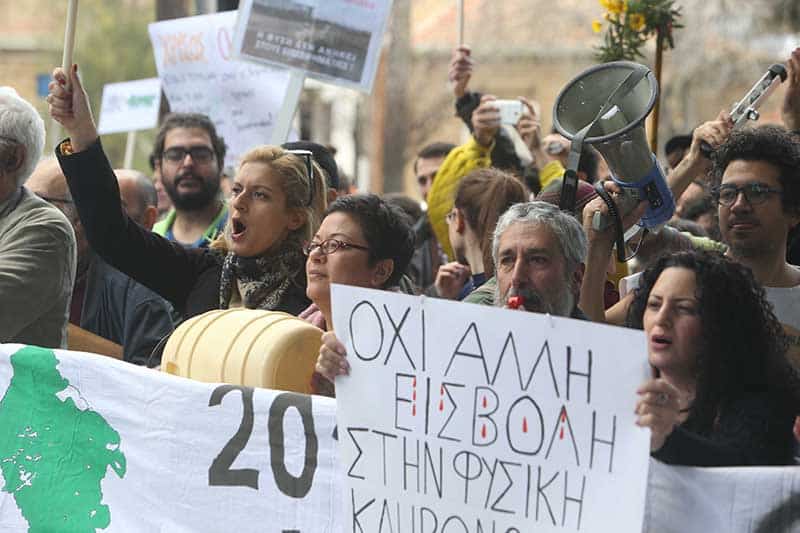 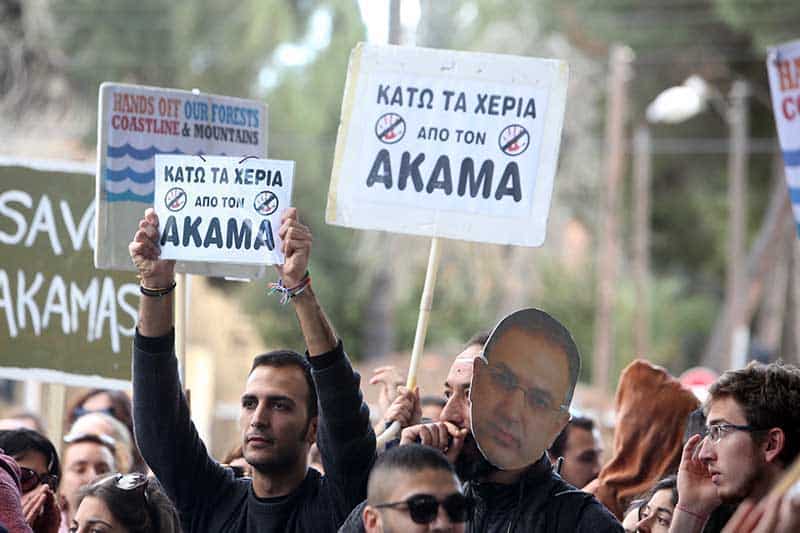 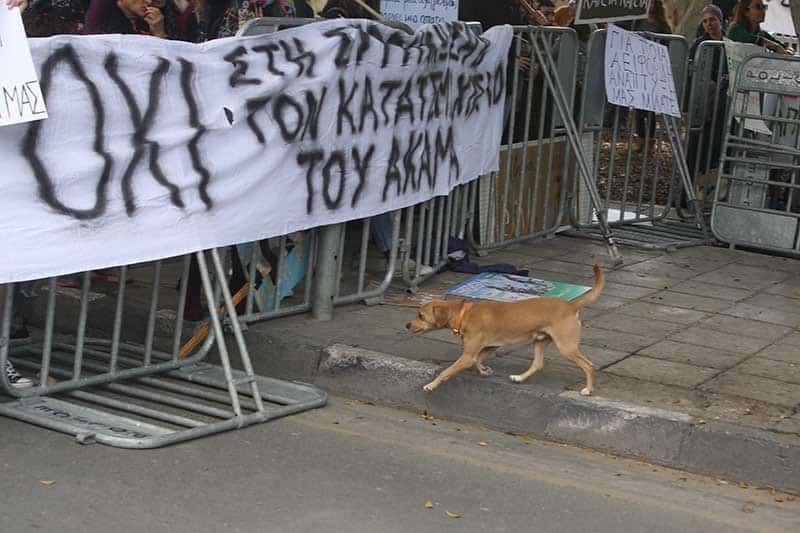 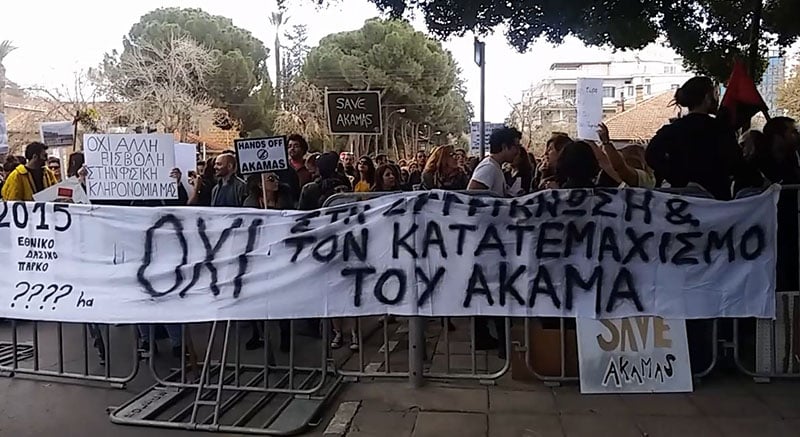 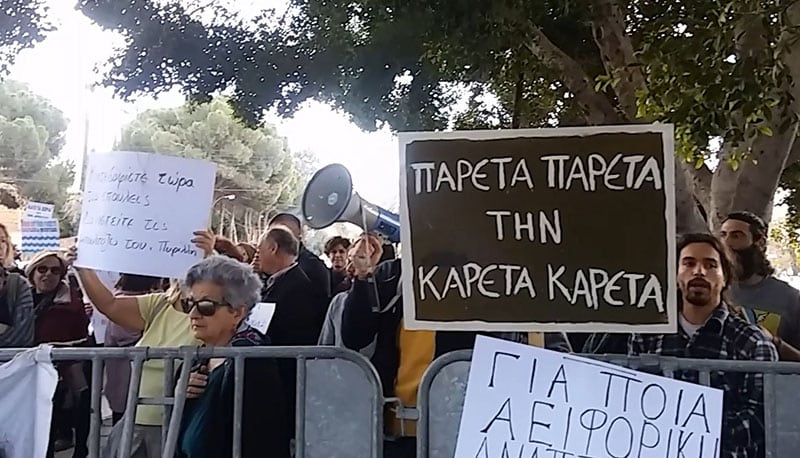 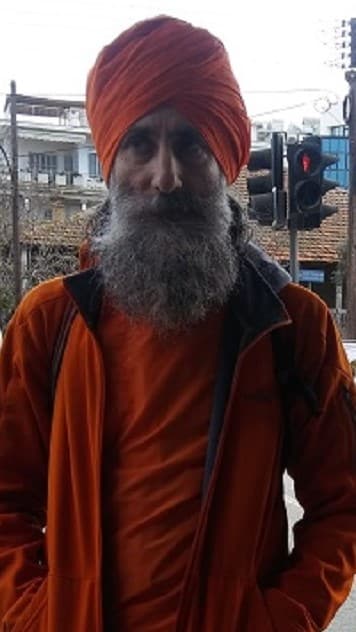 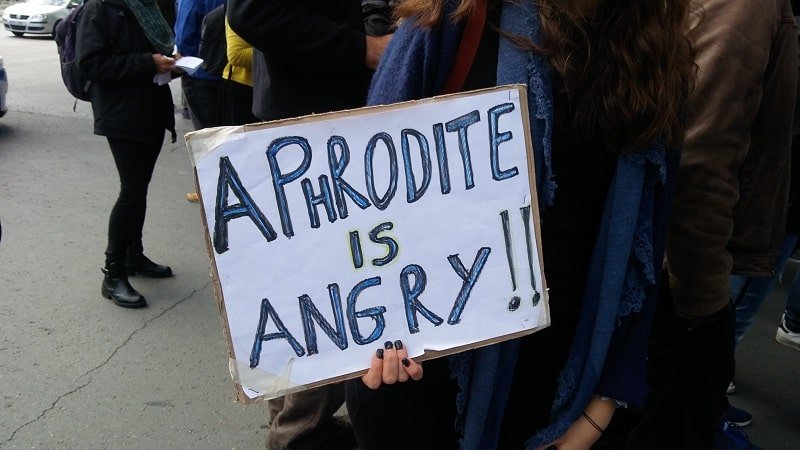 Russia ‘violating duty to halt Syria’s use of chemical weapons’