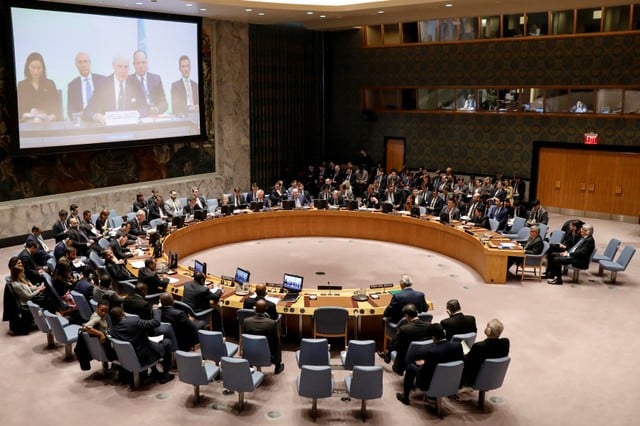 The United States plans to call for a U.N. Security Council vote on Tuesday on a proposal for a new inquiry into responsibility for use of chemical weapons in Syria after reports of a poison gas attack on a rebel-held town, diplomats said.

After President Donald Trump warned on Monday that there would be a “big price to pay” for the suspected attack over the weekend, the United States circulated to the 15-member council a revised draft resolution to establish an international inquiry, which it initially suggested on March 1.

If the U.S. text, which was seen by Reuters, is put to a vote, diplomats said it would likely be vetoed by Syrian ally Russia. A resolution needs nine votes in favor and no vetoes by Russia, China, France, Britain or the United States to pass.

The council met publicly on Monday over the latest suspected chemical weapons attack. In closed-door discussions that followed, U.S. Ambassador to the United Nations Nikki Haley said she planned to put the draft resolution to a vote on Tuesday, said diplomats, who requested anonymity.

At the public meeting, Haley said, “The world must see justice done,” adding that the United States would respond to the chemical weapons attack in Syria regardless of whether the Security Council acted or not.

“This is basically a diplomatic set-up,” said Richard Gowan, the U.N. expert at the European Council on Foreign Relations.

“Russia will inevitably veto the U.S. resolution criticizing Assad, and Washington will use this to justify military strikes,” he said. “A breakdown at the U.N. will also make it easier for France to justify strikes.”

A Syria medical relief group said that at least 60 people were killed and more than 1,000 injured at several sites in the attack on Douma on Saturday. Russia and Syria said there was no evidence that a gas attack had taken place.

Russian U.N. Ambassador Vassily Nebenzia accused the United States, France and Britain of stoking international tensions by engaging in a “confrontational policy against Russia and Syria.”

He told the council, “A broad arsenal of methods is being leveraged – slander, insults, hawkish rhetoric, blackmail, sanctions and threats – to use force against a sovereign state.

“Russia is being unpardonably threatened. The tone with which this is being done has gone beyond the threshold of what is acceptable, even during the Cold War.”

A previous joint inquiry of the United Nations and the Organization for the Prohibition of Chemical Weapons (OPCW) had found the Syrian government used the nerve agent sarin in an April, 2017 attack and has also several times used chlorine as a weapon. It blamed Islamic State militants for mustard gas use.

That inquiry ended in November after Russia blocked for the third time in a month attempts by the U.N. Security Council to renew its mandate for another year. Moscow slammed the joint U.N. and OPCW inquiry as flawed.

Russia proposed its own draft resolution in January to create a new investigation.

In response to Haley’s push for a vote on Tuesday, Nebenzia told the council behind closed doors that he, too, could put his draft to a vote.

FM Nikos Christodoulides off to Cairo for working visit