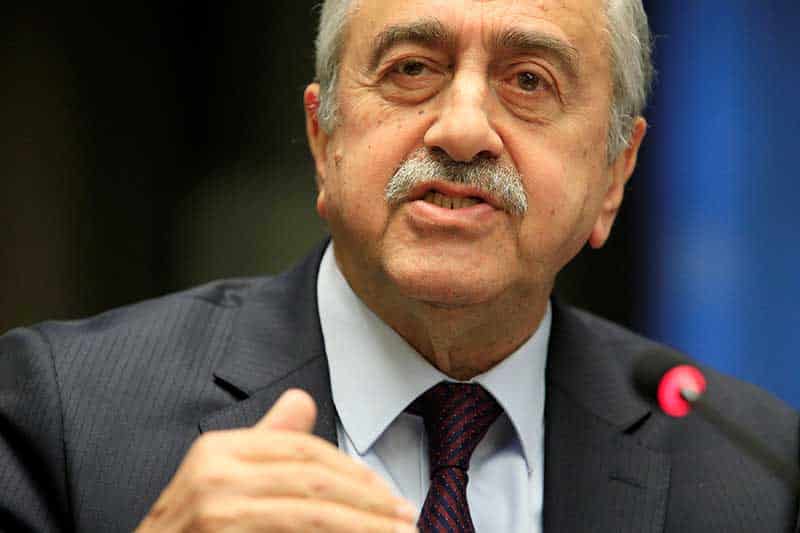 Turkish Cypriot leader Mustafa Akinci said on Monday that if the Greek Cypriot side was ready to accept the Guterres framework without changes, it could be announced as a strategic package agreement.

In a brief tweet Akinci said “If the Greek Cypriot side is ready to accept the #Guterres framework as it is, without any alterations, it should say so without delay. In that case, we can announce it as a strategic package agreement… @AnastasiadesCY”

The Greek Cypriot side has been saying, since the talks failed in Crans-Montana last year, that they wanted the framework laid down by UN Secretary-General Antonio Guterres to be the basis for the resumption of negotiations.

But statements from the Turkish side since Crans-Montana have been focused on a ‘new roadmap’ for the talks, even outside the UN framework, as stated by Turkish Foreign Minister Mevlut Cavusoglu when he was in the north last week.

Coupled with increasing speculation in the north, and overt statements by some Turkish Cypriot politicians about putting partition on the table, Akinci’s Twitter overture to President Nicos Anastasiades is being seen as a last-ditch attempt to salvage the negotiations before it’s too late.

Indeed, one observer called it a “kamikaze manoeuvre” on the part of the Turkish Cypriot leader. The Cyprus Mail understands that Akinci’s meeting with Cavusoglu was difficult due to their differing views on how the Cyprus issue should move forward with Ankara wanting to abandon the UN framework altogether.

The reason Akinci wants the Greek Cypriot side to accept the Guterres framework as a strategic package without delay and without changes is because, observers say, if it’s used only as a basis for negotiations like Anastasiades wants, Akinci is worried that the former will cherry-pick only what is agreeable to the Greek Cypriots such as security and guarantees.

The fear is that they would then push for changes to the parts of the framework that benefit the Turkish Cypriot side when it comes to internal aspects of the Cyprus issue and power-sharing,  possibly diluting them.

The Cyprus Mail also learned that during the dinner the two men had on April 16, neither of the leaders discussed with the UN their thoughts on the framework, but it was clear they both agreed that not resuming the talks was not the way to go.

In a longer statement on the ‘TRNC presidency’ website on Monday, Akinci went on to say if the Greek Cypriot side accepts the Guterres framework, a new round of talks would have more meaning when it came to filling in the gaps of a settlement.

He said he did not think the idea of a confederation or a two-state solution was something the Turkish Cypriot side could get on the negotiating table. “Even if some ideas are raised in southern Cyprus from time to time, these are not convincing,” he said

“The political atmosphere is not favourable [for that]. It is not realistic.”

Akinci said that after the failure in Crans-Montana, things had become harder but even so he said there was one fact that had not changed.

“The Cyprus problem will continue to be on the agenda like any problem awaiting solution. And for that there will be diplomacy and dialogue,” he said.

At the same time there was no point any more in reliving endless open negotiations as it was unrealistic to expect different results from doing the same thing over and over
“If it’s not results-orientated, there is no point. The way out can only be sought within a strategic package approach. At this point, I see the benefit of underlining one thing. All sides have to be sincere about the Guterres framework, which has emerged with many elements as a result of our efforts over the years,” he said.
“We are at a crossroads… the solutionless years have made a settlement more difficult and the division has become more and more intense. However, as long as I am on duty, I will make all the efforts I can make for the solution, despite all the problems. I’m not going to flee from the responsibility.”

Akinci said the time lost so far on the notion of a confederation only helped the Greek Cypriot to enter the EU “alone on behalf of the entire Cyprus” when for decades it has been accepted by all sides that a bizonal, bicommunal federation was the basis of a settlement.

The new impasse might now result in the Greek Cypriots alone benefitting from natural gas reserves, he said, or the Eastern Mediterranean would be a new source of tensions
“We will be defined as the party rejecting the United Nations parameters,” he said.

“If the necessary will is shown, it may still be possible to achieve a solution in Cyprus with political equality, sharing and co-operation, and taking into account the security concerns of both communities. The Greek Cypriots must now consider seriously any amendments that will bring more timeframes into the fray. They must realise that the time is now and not let it pass.”

There was no immediate reaction from the government. President Nicos Anastasiades and spokesman Prodromos Prodomou left on Monday for Egypt, and Foreign Minister Nicos Christodoulides was due to return Monday from a visit to Saudi Arabia.

The UN in Cyprus could not immediately be reached for comment.

A beetle has been named after Leonardo DiCaprio