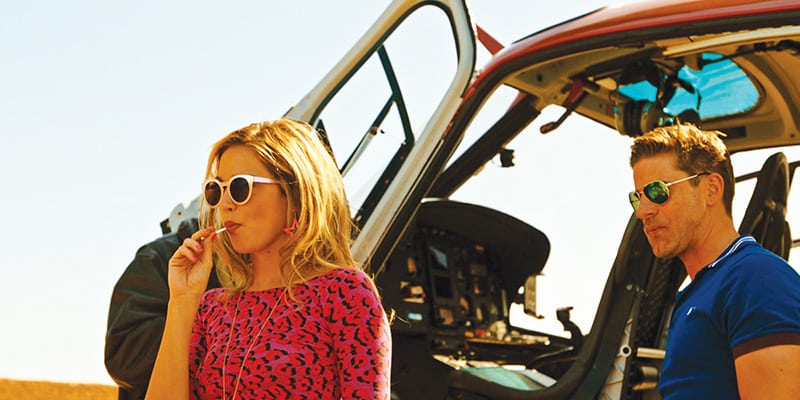 The war between men and women is also a war between stylish and silly (or silly and stylish; we’re not trying to tag either gender) in Revenge, a spectacularly gory horror thriller and one hell of a calling-card for first-time director Coralie Fargeat. Fargeat isn’t totally green; she’s been working for 15 years, but with only a couple of shorts and some TV work to her name – and her determination to kick-start a somewhat stalled career is evident from the very first shot, and the ones after that.

The opening shot, for instance, is a vista of a barren desert landscape, perfectly still apart from a tiny black dot that appears in the far distance – then gets bigger, and bigger, and turns out to be a helicopter, and comes closer, and closer, and seems set to collide with the camera before veering up and away. That’s the first shot. The second shot is the same landscape, only now with a greenish hue, which turns out – as the camera withdraws – to be a reflection in a pair of sunglasses. Style is everywhere here. The glass door in the main location, a house in the desert, has turquoise and pink panels (‘his and hers’, you might say, tying in with the theme). One low-angle shot is a study in elements: flames in the foreground, blue sky behind, with a man’s face in between. Another, near the end, casts our heroine Jen (Matilda Lutz) as a kind of biker of vengeance, all in black and flecked with blood-red light. It’s magnificent.

Hand-in-hand with the style we have silliness, lots of it; Revenge requires your disbelief to be not so much suspended as placed on indefinite leave. Nor is it just implausibility. The film simply sags in the middle, wallowing in body-horror stuff – messy DIY surgery, or an excruciatingly drawn-out scene where a guy extracts a shard of glass that’s lodged deep in his foot – that’s only there to elicit squeals of delight from the immature gorehounds in the audience. Actually no, let’s not be snobbish: it is pretty funny when the shard-of-glass guy tries to drive away and his foot squirts blood (with accompanying yell of pain) every time he presses the gas pedal. But a little of this slapstick goes a long way.

Then again, Fargeat knows what she’s doing. In fact, style and silliness may be two sides of the same coin here, the former heightening the images while the latter heightens the plot to the level of garish cartoon. Going way over-the-top is the best way to play this rape-and-revenge premise nowadays, allowing it to work both seriously and not so seriously. Jen is raped, left for dead, but returns to take revenge – a plot that can’t be played straight (that would be no fun at all) but also deserves more than leering exploitation, especially with a woman at the helm. As it is, Revenge becomes fantastical, indeed the entire second half could conceivably turn out to be a dying woman’s dream. After a while, even the splendid desert landscapes start to seem cartoonish.

This is the war between men and women, and the film is surprisingly complex. On the one hand, men do awful things then try to justify them. Sure, my friends messed up, admits slimy boyfriend Richard (Kevin Janssens), “but you’re so damn beautiful too, it’s hard to resist you”. (The dialogue is about 70 per cent in French, though it’s pretty sparse; the film’s strengths are visual.) Men are explicitly seen as animals: one is a lizard, another a pig. On the other hand, the roles of hunter and prey keep shifting, Jen cast as both victim and monster. One intriguing shot has Stan (the rapist) in his car at night; we see him in profile, with the darkness behind him – and, as the shot goes on and Stan faffs around obliviously, our eyes are glued to the darkness, waiting for Jen to emerge and strike at any moment. Stan is oddly victim-like here; yet the very next scene shows Jen in her own little purgatory, on the run and bleeding copiously, the dynamic reverting to normal.

Is there more? Certainly. A peyote-fuelled dream with Jen’s head exploding not once but twice. An extreme close-up of an ant nearly flattened by drops of blood. (Later, a spider gets drowned in a stream of urine; to quote the lady in Night of the Hunter, it’s a hard world for little things.) Above all, a splendid climax back at the house, Jen and Richard both prowling the corridors with shotguns – he also happens to be stark naked, having just come out of the shower, balancing her sex-kitten objectification in the early scenes – ending with the walls literally bathed in blood. Bottom line? Revenge is not for all tastes, but Coralie Fargeat has definitely arrived; any random shot of this movie will tell you that.

In French and English, with Greek subtitles.

Russia’s Putin sworn in for another six years in office