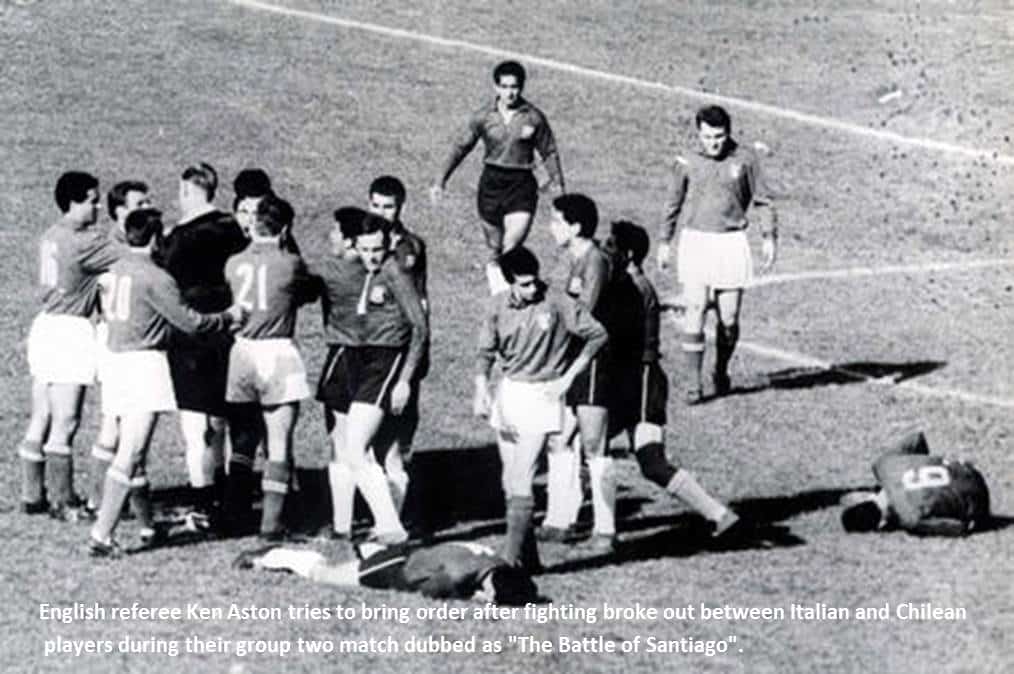 After two successive tournaments in Europe, the 1962 World Cup was hosted by Chile.

Argentina had been expected to stage the event, but powerful pleading by the Chilean FA president in the aftermath of the most powerful earthquake ever recorded, killing 5,000 people, won the sympathy of FIFA.

The tournament was marred by defensive and often violent tactics, notably the ‘Battle of Santiago’ first round clash between Italy and Chile, which the hosts won 2–0.

Players on both sides made deliberate attempts to harm opponents though only two players from Italy were sent off by English referee Ken Aston. In the end, the Italian team needed police protection to leave the pitch safely.

Several violent games in the group stage had already led to the tournament being described as ‘more of a World War than a World Cup’.

In a blow to the tournament, Pele, the hero of Brazil’s victory four years earlier, tore a thigh muscle in their second group match against Czechoslovakia and played no further part.

Colombia’s Marcos Coll became the first players to score a goal direct from a corner kick in a World Cup and the goalkeeper he defeated was the legendary Russian Lev Yashin.

The 1962 World Cup final was held at the Estadio Nacional in Santiago, and saw defending champions Brazil take on Czechoslovakia.

After an anxious 24-hour wait, FIFA ruled that Brazil’s ‘Little Bird’ Garrincha, who had lit up the tournament with a series of superb performances in the absence of the injured Pele, would not be suspended despite getting himself sent off earlier in the event.

Both teams had played each other during the group stage, a match which ended in a goalless draw.

This was the second World Cup final featuring teams who had already faced against each other during the group stage (the first was the 1954 final between Hungary and West Germany).

The Czechs took the lead after 15 minutes through Josef Masopust, but Brazil equalised just two minutes later through Amarildo.

Zito and Vava added further goals for the Brazilians in the second half as they ran out 3-1 winners, joining Uruguay and Italy as two-time champions.

This was only the second successful defence of the World Cup title in the history of the competition (after Italy in 1938) and proved the Brazilians were more than a one-man team.

‘Ronaldo makes everything possible for Portugal at World Cup’