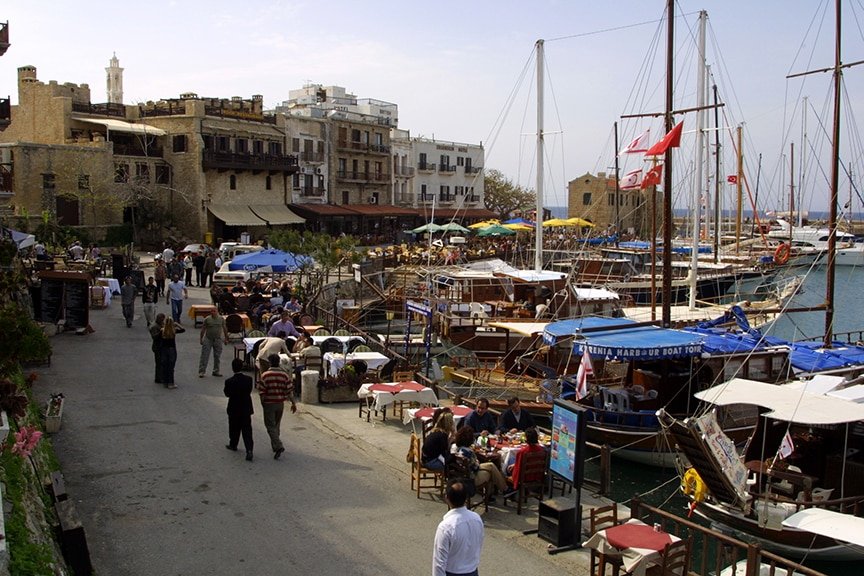 The population of Kyrenia has increased 12-fold since the invasion

MANY Greek Cypriots are under the illusion that we have reached the point where the best solution to the Cyprus problem is the non-solution, or the maintenance of the status quo. This belief is strengthened by the parties of the so-called centre which deceive knowingly (that is, unknowingly) their members with the argument that a non-solution is the best.

This is a deception stemming from the self-delusion that the status quo will remain permanently. This combination of self-delusion and deception could in the end lead to Cyprus’ annihilation. The bitter truth, which unfortunately is hushed up, is that if the status quo remains such earth-shattering changes would be precipitated that it is doubtful whether Cypriot Hellenism would survive beyond the 21st century.

It is thought that without a settlement the international community would not proceed to the de jure recognition of the so called ‘Turkish Republic of Northern Cyprus’. Whatever we do, what exists cannot be equated with what does not. Consequently, the most probable development would be the gradual assimilation of the occupied area by Turkey. At a later stage, Turkey could decide to ‘legitimise’ the annexation of north Cyprus through a referendum. What we are afraid of will happen, namely the expansion of Turkey’s borders to the heart of Nicosia. There may be many Turkish Cypriot voices opposed to such a development – mainly those Turkish Cypriots that lived peacefully with us before 1963 – but time will gradually erase these voices.

A horrific consequence of a non-solution will be the extinction of the Turkish Cypriot community as we know it today. There will always be a few tens of thousands of Turkish Cypriots with passports of the Cyprus Republic, but what will not exist – and this has huge significance – is a Turkish Cypriot conscience or culture. More worrying will be the population’s rate of growth and its composition. Now with no obstacles, Turkey will seek with more zeal to change the population mix and it would be just a question of time before the Turks become a majority. This could be part of Turkey’s long-term plan for the ‘peaceful’ taking over of Cyprus.

To get an idea of what could happen, we should consider the population of Kyrenia. In 1974, when the invasion was staged its population was just 3,500 whereas today it is 42,000 –  a 12-fold increase. If this rate of growth continues for the next 44 years, then in 2062 Kyrenia will have 500,000 residents and it would cover an area from Ayios Epiktitos to the Five-Miles beach. In that year, the population of Turkish residents would probably be two million, double the population of the Greek Cypriots, assuming it had been reduced in the meantime as a result of a mass exodus from the country.

The scenario for us becomes more nightmarish if the big growth in the Turkish population is combined with the final withdrawal of the UN peacekeeping force, the long stay of which on the island (since 1964) has become an issue for the UN Security Council. With Unficyp’s withdrawal, how will our 200-km long border with Turkey be protected? There will always be the danger of a heated incident with unforeseeable consequences, especially in areas of fertile land like the Morphou region. An incident like this would wreak havoc to tourism and our economy, while also sparking the mass migration of Greek Cypriots to Greece and other countries.

The supporters of the status quo have not realised that Cyprus would have a huge need and duty to build up its defences over the prospect of an attack by its expansionist neighbour. Where would the resources for bolstering our defence be found? Certainly not from the revenue from hydrocarbons because even the least intelligent Cypriots now realise that we will be unable to exploit this wealth without a settlement.

I won’t carry on because all predictions for the future are very risky and in this case nightmarish. But another Asia Minor disaster, a new, horrendous genocide, or a new Alexandretta could not be ruled out of the status quo is preserved. In order to avoid such a deadly turn of events, there must be a settlement at all costs.

We must all understand that the only safe course for us and the Turkish Cypriots is a settlement that secures political equality and stability. It is also time our top priests restricted themselves to their spiritual duties and stopped the sly propaganda in support of a two-state solution. Someone must, at long last, remind them they do not have a clean record as they bear the biggest responsibility for the disappearance of Greek Cypriots from northern Cyprus.

As for the politicians who claim everything would be hunky dory by maintaining the status quo, they are living in another world. And they have got things wrong so consistently, how can anyone believe anything they say now?

Our View: Government needs to take US sanctions warning seriously