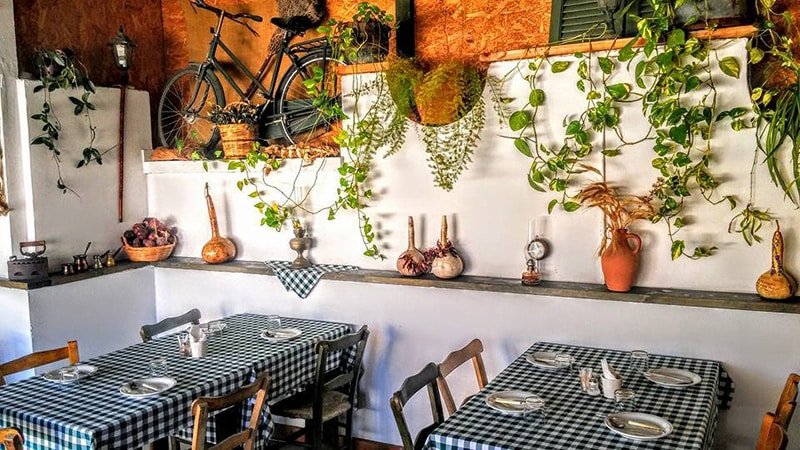 If somebody recommended a taverna in a small village, 15 minutes outside of Larnaca, you would assume that it is just another traditional restaurant with the standard meze, possibly with a few dishes that aren’t expected but still nothing too extravagant. Going to To Patrikon taverna in Tersefanou, I’m almost ashamed to say that this is more or less what I expected. But the family-run taverna that has been perfecting the art of creative Cypriot cuisine for the last three and a half years haven’t just added their own twist to local food, they’ve turned it on its head!

As we arrived at the restaurant, we were greeted and promptly shown to our table. The restaurant is quite small so due to the summer heat, we had requested an outside table which was on the pavement. While this may not sound appealing it wasn’t a problem at all. It actually felt more private as we were not too close to other tables.

Soon after sitting, one of the brothers came over to our table to greet us and explain the concept of the restaurant. He seemed very passionate and proud of what they do, explaining that all ingredients are locally sourced. One thing that also impressed me was that the restaurant promotes drinks that are local. He showed us a beer they have on the menu from a small, local brewery based in Nicosia and even knew every detail about the different types. He explained that to offer variety not only on the night and to continually use ingredients that are fresh and in season, the restaurant changes parts of the menu every three months!

After meeting this passionate gentleman and hearing what he had to say, we were excited to see what was coming.

We started off with hot, homemade bread, a small dish combining celery and apple, an aubergine dip, a ‘wild roots’ salad that was slightly bitter but balanced out with the addition of some fruit and a regular tomato, cucumber and onion salad. It was all delicious and left us wanting more!

The food kept coming and the combinations were mind boggling yet worked perfectly. One that stands out was the baby squid with caramelised pastourma (semi spicy village sausage) for a kick with a base of fava, sweet quince and a hint of lavender. It sounds like a lot to take in and not really a combination that you would think of putting together, but eating it, you could pick out each flavour. The soft texture of the well-cooked squid, the sweetness of the quince, the aroma of lavender and finally that little kick from the sausage. Amazing! I asked one of the brothers how they think up with such combinations; he joked and said that they come to them in their dreams!

Pickled vine leaves with chicken liver and trachanas stuffing, cauliflower with ocra and tahini are just a couple of other dishes that were so well combined. No flavours were too overpowering so as to take away from the enjoyment of others. They even had their own take on sieftalia! Made with lamb meat and coated with ‘tsipa’ (the top layer of yogurt) and topped with quails’ eggs was another favourite of mine. The sieftalia were light on the outside, brilliantly seasoned and melted in the mouth.

I’ll mention just one more dish. The dessert. Meringue, mousse and syrup all made from carob combined together was fantastic. My partner who doesn’t have a particularly sweet tooth joked I’d have a whole dessert to myself but it was so good that she couldn’t resist and we both really enjoyed a perfect ending to such a wonderfully creative feast!

Get to To Patrikon to give your taste buds a roller coaster ride and experience the fantastic food made by what seem to be the pioneers in a new age of Cypriot cuisine.

SPECIALTY Cypriot with a twist
WHERE To Patrikon, Dionysis Solomou, Tersephanou
WHEN Thursday to Sunday 7.30pm to midnight
CONTACT 24 424831

28 US congressmen mistaken for criminals by Amazon facial recognition tool