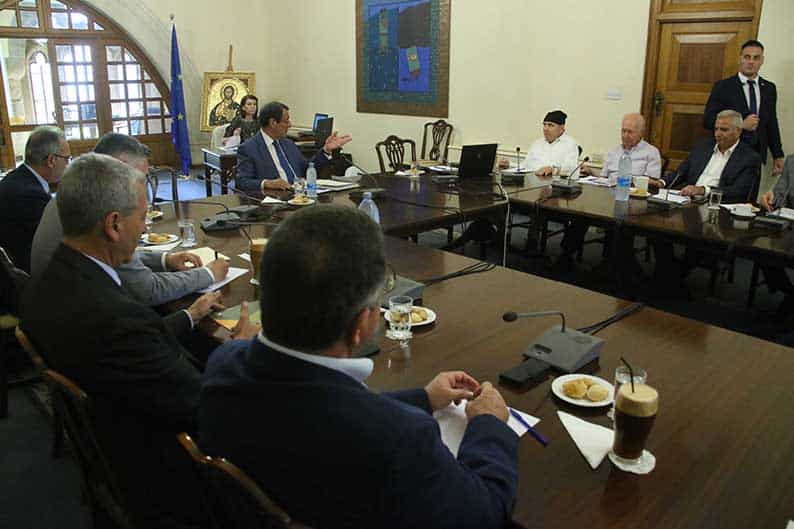 President Anastasiades with party leaders and former presidents on Monday

The Greek Cypriot side is waiting for the UN secretary-general to take the initiative to restart settlement talks where they left off, government spokesman Prodromos Prodromou said on Monday.

He was speaking after President Nicos Anastasiades met with party leaders and former presidents to brief them about his meeting last week with the UN secretary-general’s representative Jane Holl Lute.

Prodromou said that the president made clear to the UN envoy that he was fully responsive to the secretary-general’s call for the talks to restart.

During the four-hour meeting, Anastasiades also informed them on the latest developments on energy issues.

According to Prodromou, Anastasiades told political leaders the Greek Cypriot side’s position just as he had submitted it to Lute.

“The readiness, that is, and will of the Greek Cypriot side for a recommencement of the negotiations from where they left off in Crans-Montana and based on the Guterres Framework.”

He said that the Greek Cypriot side is waiting for the result of Lute’s exploratory mission to learn about the positions of the Turkish Cypriots and Turkey. Lute was also due to meet with the guarantor powers – Greece, Turkey and Britain – before submitting her report to the secretary-general in September.

On Monday, Lute met with Turkish Foreign Minister, Mevlut Cavusoglu. The minister tweeted following the meeting: “We shared our vision on the settlement of the Cyprus issue with Ms. Lute, the official assigned by the UN secretary-general.”

Prodromou said the meeting also included an exchange of views from the political leaders on all aspects of the Cyprus problem.

“Our side, regardless of any other discussion […] is that, yes, we want and expect the UNSG to take initiative for the negotiation to restart where we left off as regards the framework of procedures, always of the UN,” he said

Monday’s meeting took place against a backdrop of what seems to be growing international pressure to see the talks restart.

Lute made no public statements after her meetings with Anastasiades and Turkish Cypriot leader Mustafa Akinci last Monday to explore the possibility of resuming the peace procedure.

But her meeting came in the same week as the UN Security Council renewed the mandate of the UN peace-keeping force, Unficyp, for a further six months amid reported warnings that this could be the last time it would be renewed.

The chief Greek Cypriot negotiator, Andreas Mavroyiannis, said last week that the current track to kickstart new peace talks may well be the last-chance to solve the Cyprus problem as we know it.

Reportedly the US delegates were driving hard for the Unficyp resolution to include wording “that would associate certain benchmarks with the force’s evaluation, including deadlines and an exit strategy,” but it was not supported at Security Council since members argued that Lute’s mission to the region should not be undermined.

Speaking after Monday’s meeting with the president, Disy leader, Averof Neophytou, called for a unified front and said that it was too soon to draw conclusions from Lute’s visit, as she had yet to visit the guarantors – Greece, Turkey, UK – on the issue of security. This, he said, was the most basic aspect of the Cyprus problem.

“We support the president in his effort for a recommencement of the talks based on the basic principles of seeking a solution according to UN resolutions and decisions of the Security Council for a bizonal, bicommunal federation with political equality and respect of human rights,” Neophytou said.

He added there was no plan B as there is only one Cyprus: “We need to try through dialogue to do what’s humanly possible to reunite it.”

Akel leader, Andros Kyprianou, said that UN Secretary General Antonio Guterres had asked to be convinced that there was political will not only for a recommencement of the talks but also for a positive outcome.

“It is our position that the president ought to convince (Guterres) that he was willing to move within that framework,” Kyprianou said.

Straying from the goal other than that of a unified country should not be an option, he said.

Kyprianou said that his party would wait for the outcome of Lute’s mission before taking a stand “on all we have heard by the president”.

Diko leader, Nicolas Papadopoulos, said that as the impasse was due to Turkey’s intransigence, initiatives were needed to put pressure on Turkey so as to ensure a successful outcome of the settlement negotiations.

The Guterres Framework, he said, “should not be accepted as the framework of discussion of the Cyprus problem”.

The Greek Cypriot side cannot start with the position that the settlement talks must pick up where they left off. “Turkey is not going to agree to something like this, it will ask for something in exchange, leading to further concessions, especially as regards the chapter of security, troops, guarantees, intervention rights,” he said.

Yiorgos Lillikas, head of the Citizens’ Alliance, said the government should assign the preparation of comprehensive studies on all possible scenarios to experts, diplomats and academicians so that it can have various action plans.

“The course of the Cyprus problem is no longer just up to us and I fear neither up to our consent. I hope we all realise how critical these moments are,” he said.

Deputy head of the Solidarity Movement, Polys Pallikaros, said that his party also disagreed with talks recommencing from where they left off last summer as this would lead to “a non-viable settlement solution”.

The head of the Greens, Giorgos Perdikis, said that Anastasiades’ meeting with Lute “could cause only disappointment to anyone hoping that there would be positive developments on the Cyprus problem”.

Although Lute is on an exploratory mission, he said, there were no optimistic messages from her visit as she had put forth questions “that point out the direction the UNSG is moving.” When the UNSG asks, he said, for the next move by President Anastasiades, so that the negotiations are fruitful, “there is no other move than accepting the terms of Turkey as regards guarantees.”

In terms of energy policy, Prodromou said Energy Minister, Giorgos Lakkotrypis, briefed the leaders regarding the increased interest by companies in the activities in Cyprus’ exclusive economic zone “and for the negotiations with our licensed partners and the forthcoming exploitation of the Aphrodite block.”

Spain to invest €35m in initial costs of migrant influx