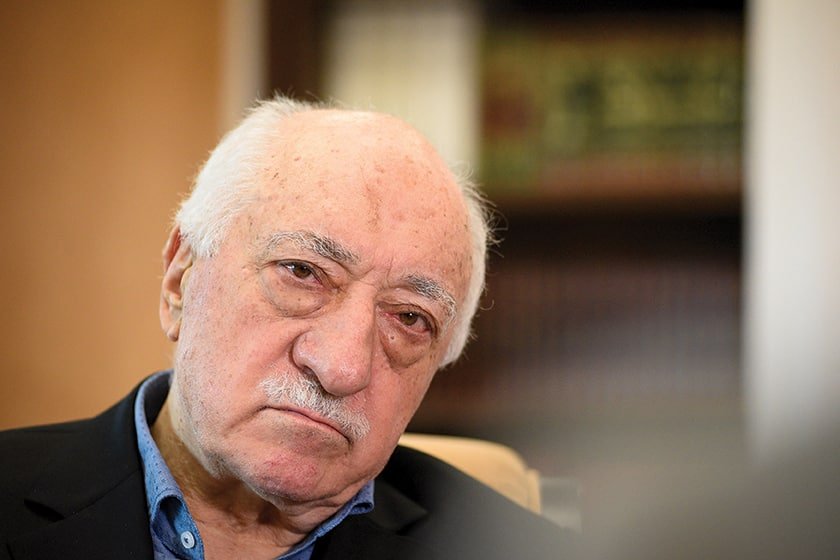 U.S.-based cleric Fethullah Gulen at his home in Saylorsburg

President Recep Tayyip Erdogan complained in a speech last Saturday that the US president was prepared to risk losing an ally of 60 years over a priest. The priest he was referring to is Andrew Brunson an evangelical pastor facing charges of having links with terrorist organisations.

The Turkish president, however, may wish to ponder whether he too is risking relations with the US over a turbulent imam whom the US president has no power to get rid of at present.

In an op-ed of August 10, 2018 in the New York Times Erdogan was more circumspect than in speeches to his supporters. He condemned US support for Turkey’s enemies in Syria, and its failure to extradite Fethullah Gulen, the alleged mastermind behind the failed coup d’etat in 2016, and America’s lukewarm condemnation of the plot to kill him in the attempted coup.

He also condemned US attempts to force his government to intervene in the judicial process to release pastor Andrew Brunson as not being in line with Turkey’s constitution, and accused the US of double standards and disrespect. He did not, however, mention that the state of emergency in Turkey suspended due process that was only lifted in July 2018 having lasted three months longer than Brunson’s detention in October 2016. It is surprising that the mandarins at the Turkish foreign ministry did not advise against the choice of Turkey’s judicial process as the battleground to fight the US over double standards.

The idea of writing a piece in the New York Times over the head of the American government is not new. President Vladimir Putin wrote a well-constructed letter in September 2013 about US plans to attack Syria. Erdogan’s op-ed is in the same mould – direct, brief and to the point. Perhaps Putin helped him write it, although as neither of them have much English I suspect it is the editorial team at the NYT that was responsible for its forthright tone and plain style.

There is, however, no mention of the limited discretion that exists to render no ground for prosecution.  Discontinuing the prosecution of Andrew Brunson is in the gift of the public prosecutor in Turkey whereas the extradition of Fethullah Gulen is not in the gift of the US federal or state prosecuting agencies. The two cases are not comparable: the Americans want their citizen back to help him avoid punishment whereas the Turks want their citizen back to mete out punishment to him.

Generally speaking in most jurisdictions there is a discretion not to prosecute depending on the strength of the evidence. In the UK and Cyprus the attorney-general also has power to enter a nolle prosequi – a discontinuation of criminal proceedings in the public interest that covers anything from the age and health of the accused to reasons of state.

The Turkish public prosecutor has power under the Turkish Criminal Procedure Code to stop the prosecution of Andrew Brunson if there is no evidence of sufficient gravity to justify suspicion of a crime – it is noteworthy that originally the evidence against him only justified curtailing his visa. In any case his prosecution is a political hot potato that has spiralled out of control, causing irreparable economic damage to ordinary people because the lira in their pocket purchases a lot less.

President Erdogan should get off his high horse and agree that pastor Brunson can now be deported rather than remain under house arrest. Given that he has lived in Turkey for 23 years my sense is that having to return to Trump’s America would be enough punishment for any wrong he may have done.

It is much easier to deport than prosecute foreign nationals whose conduct and associations are deemed hostile or detrimental to the host country. The evidence required to prove this is often a matter of judgement by officials in the relevant department rather than the hard evidence required to mount a criminal prosecution. A deportation order is an order requiring a foreign national to leave and prohibiting his return – this prohibition on return is the sting that will hurt Brunson most – especially if the charges are left on file.

As for the extradition of Gulen from the US, much as Trump might wish to return him to Turkey, he really does not have the power to by-pass due process. It is true that in extradition cases the evidence required is not tested as much as at a full-blown criminal trial, but there are evidential requirements and legal obstacles that can take years. In the UK it took 12 years to extradite Abu Qatada to Jordan on terrorism charges.

The evidence in support of facts that show conspiracy to kill the president of Turkey and overthrow his government has to be strong enough to arrest and commit him for trial on similar charges in the US – not Turkey. In other words, evidence capable of proving the case against him beyond reasonable doubt.

According to the Turkish government 25 boxes of documentary evidence were sent to the US law enforcement agencies. It seems, however, that the nature and quality of the evidence were not deemed strong enough by those agencies to warrant Gulen’s arrest and detention pending extradition.

But it does not end there because Trump is also convinced that as a man of faith Brunson is completely innocent. I do not myself buy the argument that he is innocent just because he is a man of faith. Judging only by Brunson’s appearance, however, my guess is that at worst he is guilty of sanctimonious naivety. He looks dour – a bit of an idealist who probably fell foul of the Turkish authorities in the febrile atmosphere after the July 2016 coup.

I remember the evangelical preachers at the American Academy in Larnaca before they left following the murder of the American ambassador in 1974. Given that we now know from Erdogan’s op-ed piece that Turkey sent its troops to Cyprus “despite Washington’s objections”, the murder shows what happens when a country goes into ochlocracy mode.

The American Academy was a missionary school and many of our teachers were American evangelists, but I very much doubt if their evangelism was a cover for anything more sinister.

The parting of ways between Turkey and the US reminded me of my evangelist history master, Mr Chester Hutchinson who looked the classic kindly American. He was an excellent history master. I owe him my first encounter with British foreign policy as propounded by Lord Palmerston who said famously: “we have no eternal allies and no perpetual enemies. Our interests are eternal and perpetual and those interests it is our duty to follow.” Not much idealism there. But thinking of the deteriorating relations between the US and Turkey, Palmerston might have had a point.

If I were Erdogan I would stand back and reflect without bravado or braggadocio that perhaps deportation is by far the best course on the merits given an evangelist vice-president, a populist president and a devalued currency that hurts the common man.

Cypriot teachers should try teaching in the UK

Our View: Gesy seems to have been reduced to a points-scoring exercise