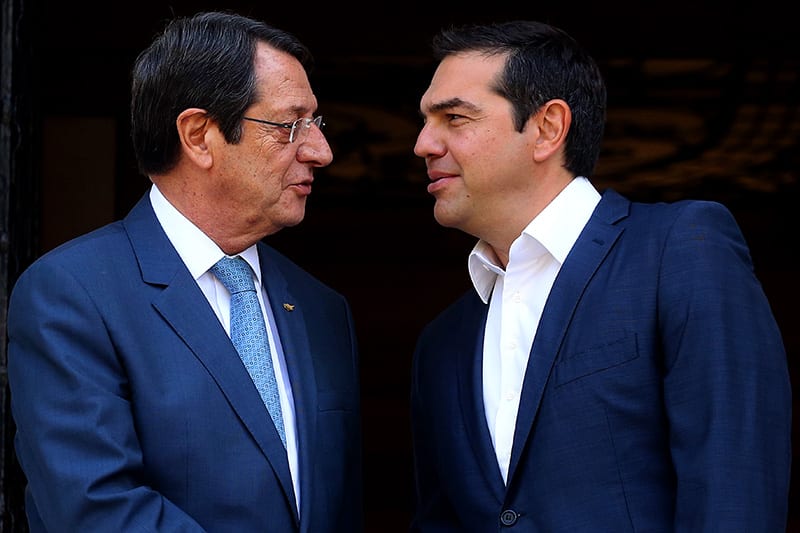 The discussions had focused on recent developments regarding the Cyprus issue and the two agreed on initiatives to be taken, in view of the UN General Assembly in New York later this month when the Cypriot leaders are to meet separately with UN chief Antonio Guterres, and based on the results of his envoy Jane Holl Lute’s report on whether there are prospects of success from a new round of talks.

“These negotiations must be based on UN resolutions and decisions, and also on the Guterres framework issued at Crans-Montana. At the same time, all the open issues should also be resolved”, Prodromou stated.

The last round of talks at Crans-Montana failed in July 2017.

Prodromou said Cyprus and Greece shared the belief that negotiations must restart from where they left off, also adding that the two parties “agree on the need for an adequate preparation before a new Conference on Cyprus, in order to ensure fruitful results at the settlement efforts”.

“It is a joint belief that the comprehensive and viable solution to the Cyprus problem constitutes the highest priority,” Prodromou said.

During their meeting, Anastasiades and Tsipras also discussed the EU’s relationship with Turkey, bilateral planning on energy issues as well as the relation between energy policy and foreign policy, international issues and the cooperation of Greece and Cyprus with regional states and within the EU. According to Prodromou.

Greece and Cyprus are also on the same page when it comes to stability in the region and efforts for a Cyprus solution, Tsipras said before the meeting.

The two met in the morning at Tsipras’ office in the Maximus Megaron.

Welcoming Anastasiades, Tsipras said there is “coordination for stability and peace in the region between the two countries, and for creating the conditions for a just and viable solution to the Cyprus problem.”

This stable attitude, he said, has created the prerequisites for wider support from the international community of the two countries’ efforts.

“We are now at a time when we need to talk about the new perspectives ahead of us and about the best way we can face these challenges,” Tsipras said.

Anastasiades said that the meeting was taking place “in view of contacts at the UN General Assembly and to see the whole spectrum.” His meeting with the UNSG is on September 28, on the sidelines of the UN general assembly.

The Greek foreign minister has had a series of contacts including with his Turkish counterpart and with Lute, Anastasiades said, “and we will have the opportunity to inform each other about everything concerning the Cyprus issue.”

“Let us hope that developments in New York will be such as to help so that a creative dialogue resumes, as long as the UN Secretary-General considers that the preconditions are there,” Anastasiades said.

The president was due to return to the island on Monday night as he has a busy schedule on Tuesday.

In the morning he is to meet with the UN Secretary-General’s Special Representative in Cyprus, Elizabeth Spehar. She will also have a separate meeting with Turkish Cypriot leader Mustafa Akinci, who is to meet Guterres on September 29.

Anastasiades will also meet on Tuesday with EU Commissioner for Migration, Home Affairs and Citizenship, Dimitris Avramopoulos, who will be in Cyprus for talks with the government on migration and security issues.

In the afternoon on Tuesday, Anastasiades is to meet with Egypt’s Minister of Petroleum, Tarek El-Molla.