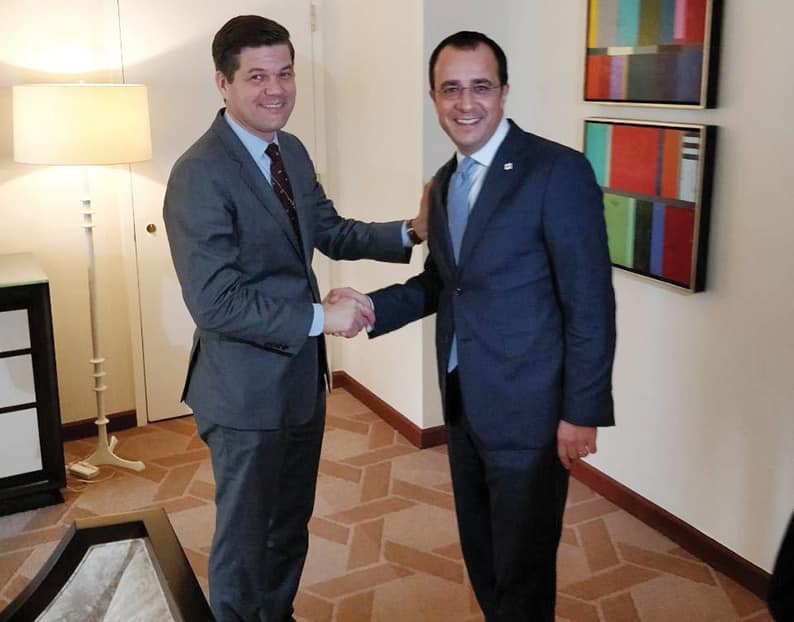 PREZ NIK was completely upstaged in the Big Apple, where he was with his entourage last week for the UN General Assembly, by his foreign minister Nicos Christodoulides, whose talent for self-promotion is on a par with that of Odysseas even though his style is completely different.

Whereas Odysseas, uses intimidation and moralising, which makes him enemies, to promote himself, Christodoulides is on a mission to become the country’s sweetheart, by uttering boring platitudes, and relying much more on the image than the word to win the love of the public.

He is the star of all the images he tweets, usually with some foreign dignitary and accompanied with banal comments such as “very positive meeting” and “focus on bilateral relations.” He is better-looking and more photogenic than Odysseas, so he is focusing on his strong points, even though some could regard the non-stop tweeting of pictures of himself as a tad narcissistic.

There was an avalanche of Ministry of Foreign Affairs tweets from New York, featuring pictures of the popular Paphite, grinning for the cameras while warmly shaking the hand of a foreign counterpart or feigning intense interest in what he was being told.

When I read a report last Monday quoting the photogenic foreign minister, saying he would meet some 12 counterparts, on the side-lines of the General Assembly, I wondered what the hell he would discuss with the foreign ministers of Oman, Iraq, Algeria, Morocco etc. When I saw all the pictures he tweeted, I realised the meetings were justification for some well-earned self-promotion through twitter, which would raise his political profile even higher.

HIS MEETING with the foreign minister of the United Arab Emirates, Abdullah bin Zayed Al Nahyan, produced tangible diplomatic results. According to a Press and Information Office announcement, during their meeting, the two ministers signed a “Memorandum of Mutual Recognition of Driving Licences”. The agreement, the PIO informed us, “constitutes a significant development for Cypriots that work and live in the UAE.” All 50 of the Cypriots that work and live in the UAE and have a car (the PIO omitted to mention this), will be eternally grateful for the unrivalled diplomatic skills of Christodoulides that achieved this significant development. Before this momentous agreement, were Cypriots in the UAE not allowed to drive?

WHEN he is signing agreements on recognition of driving licences, we are spared the ordeal of hearing his pompous theories about the significant role Kyproulla will play, under his visionary guidance in the Mediterranean region.

On his arrival in New York on Sunday he told journalists the following: “One of the basic pylons of the Cyprus Republic’s foreign policy is the projection of our role in the Middle East and the Mediterranean and the added value that our country could have for the international community in its effort to face the challenges of the area, which as you know have consequences on a European and international level.”

Not only do we have a role to play, but Christodoulides will also add value to the international community’s efforts to tackle the crises in Syria and Palestine, increasing profitability and the efficiency of investment. This is will be a departure from the past when the only value Kyproulla added to the international community was nuisance value.

USING economic terms to define our country’s political role seems to have become quite fashionable among Paphite politicians. On Saturday, that other great intellect from Paphos, Yiorkos Lillikas issued an announcement saying that “we need to study which are our alternative choices (re the Cyprob) and which are the competitive advantages that Greece and Cyprus have.”

Our competitive advantages are low corporate tax and the granting of EU passports, but how they would contribute to shaping a new strategy on the Cyprob only Lillikas can tell us. I suppose they might add value to it.

MY FRIEND Alecos, in his Alithia column, had this to say about Christodoulides’ delusions of grandeur. “Other small countries like Malta, without problems and without an occupation do not dream about playing a role in the area nor does it fantasise about offering added value to the international community.”

He attributed this thinking back to the days when “Makarios believed he was one of the greats of the planet,” and concluded: “The Makarios syndrome survives in our small country, which, perennially, had the fortune to have great leaders and great politicians.” It is only fitting that the Makarios syndrome is being kept alive by another church-going Paphite, who adds huge value to our foreign policy.

IT SHOULD be pointed out that the delusions of grandeur are not the ownership of Paphites. Greece’s foreign minister, Nikos Kotzias, has been going on about Kyproulla’s geostrategic role for some time and last week he said things that made the geo-strategists of Edek delirious.

“I am very happy that now very many forces, and powerful ones in the world, view Cyprus not as a problem of the UN, but mainly as a country with great geostrategic and geopolitical importance.”

Edek welcomed this platitude, and “reminds that the party had pointed out, for some time now, the importance of the geostrategic factor in the solution of the Cyprus problem and the need for further upgrading of the geostrategic role, of both Cyprus and Greece, in the broader region of the Middle East.”

All we need now is for Edek or Kotzias to tell us where we can buy an upgrade of our geostrategic role (is it an app?), which will also improve our competitive advantage and add value to the international community.

AFTER that over-long and unprofessional digression, a return to the original point about Nik being completely upstaged by his namesake in the Big Apple. Perhaps he did not see the local papers, which were giving more coverage to the activities of the younger, better-looking and, critically, more popular Nik.

But the prez secured a bigger triumph than his protégé. He met Mother Russia’s foreign minister Sergei Lavrov with whom he discussed “the Cyprus issue and the excellent bilateral relations that would continue to be so.” He sought help from Lavrov on the issue of Unficyp, but also asked, “given the good relations Russia has with Turkey to use the influence it can exercise, to secure movement so there could be progress.”

Moscow, he said, was backing the “finding of a solution.” Nik’s real concern was getting Russia’s support on Unficyp, which the Yanks seem determined to downsize or withdraw come January. Efforts to keep Unficyp was also the main theme of Nik’s speech to the near empty auditorium of the UN General Assembly on Thursday. Had the world lost interest in the Cyprob?

A SETBACK was also suffered at the UN, but nothing was made of it in our media. UN Secretary-General Antonio Guterres, brought his meeting with Mustafa Akinci forward, from Saturday to Friday, causing consternation among foreign ministry official fighting to prevent the upgrading of the pseudo-state.

In the past, the UNSG’s meeting with the Turkish Cypriot leader was held on Saturday, after the General Assembly work was completed on Friday. This tradition had been imposed by our guys who argued the UNSG could not possibly meet the leader of a pseudo-state while the General Assembly was in session. While there were protest by our mission, Antonio still met Mustafa on Friday and to add insult to injury the meeting lasted five minutes longer than the one he had with Nik.

In short, not only was the pseudo-state upgraded but, at the same time, the Republic was downgraded by the UNSG spending less time with our prez. What was worse he showed no respect for our geopolitical and geostrategic role.

OUR OWN Tass news agency carried yet another interview with Mother Russia’ ambassador Stanislav Osadchiy on Friday. Every couple of months, it carries an interview with the guy, even when there is nothing for him to say as was the case Friday. In Friday’s interview, he called for the immediate return of all sides to the negotiating table and urged them “to show the greatest possible constructive and creative approach for arrival to a mutually acceptable compromise on the Cyprus problem.” Is this news? Does Cyprus News Agency ask Stan the Man for these ‘zero news value’ interviews or does he call the agency and inform them he wants to give an interview? My disappointment was that he did not censure prez Nik for declaring Russia had good relations with Turkey.

THE BRAVE Odysseas sent a tweet about last week’s item in the Coffeeshop, informing us that his sister, formerly employed at Cyta, who landed a job on the A14 pay scale at the interior ministry came top of the exams and had two MSc and a couple of PhDs. Can’t remember the exact number but can’t help thinking that person with such academic qualifications should not waste them working as a bureaucrat.

For the 11 positions offered, she was the only one that was hired from outside the public service whereas all other 10 positions were given to people inside the Ministries as ‘promotion positions’.”

Perhaps she should write to auditor-general to ask for an investigation regarding the recruitment/promotion procedures followed. Odysseas is the sort of morally superior, stand-up official who would not hesitate to report his own sister if she was the beneficiary of rusfeti.

Our View: Anastasiades and the pretence of an interest in new talks

The ‘glaring flaw’ in Estia