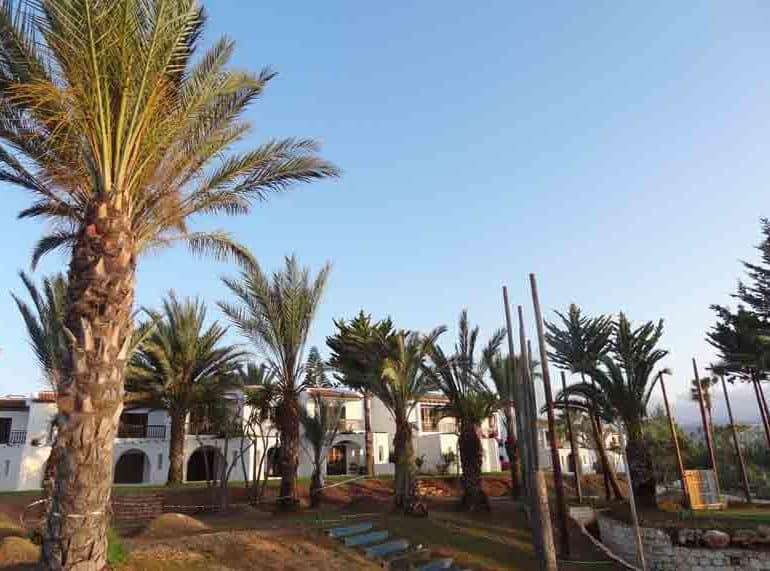 The Zening Wellness Resort at Latchi

The owner of a well-known holiday village in Latchi has hit back over claims and action taken by the present tenant which resulted in the closure of the venue in September due to a wrangle over licences.

Zening Wellness Resort – previously Elia Holiday Village – was taken over by Garmonis Hotels in 2012 on a ten-year contract.

Property owner and lawyer, Leonidas Georgiou told the Cyprus Mail on Monday that all necessary licences were in place when the resort started operating in 1982 and until it was handed over in 2012.

At present the resort has neither a Cyprus Tourism Organisation (CTO) licence nor a valid permit from the electrical and mechanical department.

“Claims made by the lessee in the press last week that there were no licences in place when the property was operating as Elia holiday village are completely untrue. I asked for a copy of our licence from the CTO which I have just received,” said Georgiou.

The Cyprus Mail has seen a copy of the licence, which reveals that the property is an existing class A hotel business in Latchi with 142 apts/288 beds.

The CTO licence also states that the business opened in 1982 and was initially classified by the board as Class B organised apartments. The last permit was issued in July 2016 when it was classified as a Class A tourist village. The licence expired in December 2017.

It is understood that the CTO rejected the latest licence application as key staff did not meet the necessary criteria.

Georgiou added that the responsibility of obtaining the relevant licences once Gamonis took over running the property was down to them.

He also claims that the contract between the two parties was terminated two years ago due to two million euros of outstanding, unpaid dues.

“We have asked the court to give us the property back,” he said.

However, Ajay Goyal of Garmonis Hotels said that the company took the decision to close Zening Wellness Resort on September 1, and that the move was announced in letters to both the Cyprus Tourism Organisation and the municipality of Polis Chrysochous.

“We will proceed with our court cases which are already filed for damages of 15 million euros from the landlord, the municipality and the CTO,” he told the Cyprus Mail.

He also claims that according to engineers, “only a third of the village is suitable for occupation” and it has been turned into residence and working place for startup software programmers from Finland and Germany.

“We invested more than 5 million euros in 2013 in renovating the property, based on assurances that all the master plans and approvals for infrastructure are with the owner and relevant government agencies,” Goyal said.

Goyal claims that the company continued to encounter many technical problems and that investment and expenses spiralled.

“Our investment has risen to level of nearly 10 million euros and our losses to more than 13 million euros because technical difficulties continued to mount. “

However, Georgiou countered that a number of structures were built by Garmonis on the large plot, without the proper permits.

Speaking on condition of anonymity a source said another issue is that the property needed to update services to comply with current EU regulations relating to electrical wiring and appliances.

“Goyal believes that the owner is responsible for paying for this, the cost could be huge,” the source said.

Both Zening and Goyal have hit the headlines a number of times since opening five years ago.

Ahead of its launch in 2013, the Council for Registration and Control of Contractors (CRCC) initiated criminal proceedings against Zening Resort for allegedly hiring a non-licensed contractor to do renovation work. They lost the case and were ordered to pay the investor’s legal fees.

Goyal then faced problems with the labour department, when complaints were made to unions that all Cypriot and EU staff were fired and replaced with ‘volunteer’ workers being given free accommodation and food in return for unpaid labour. He vehemently denied these claims.

At the time he said that he employed 45 staff, Cypriot and Europeans, all paid very well with contributions also being paid in.

He noted that the Akamas attracts social and environmental activists and Zening was happy to give them room and board for free.

“I want to be very clear – the unions made a false allegation that American volunteers were here to work. They should have clarified they were doing ‘social and environmental work’ in the area and not in our company. We are a ‘for profit’ company, we don’t need help. We have staff to do work here,” he said at the time.

Another hotelier said that the closure “makes no sense” as Goyal shut the resort before the end of the 2018 season, letting down any bookings he may have had.

“Why close, why such a drastic measure? What happens if he opens again next year. Will the tour operators want to know? It has a knock-on effect for the entire area,” he said.

Our View: Pressure on president over negotiations well overdue