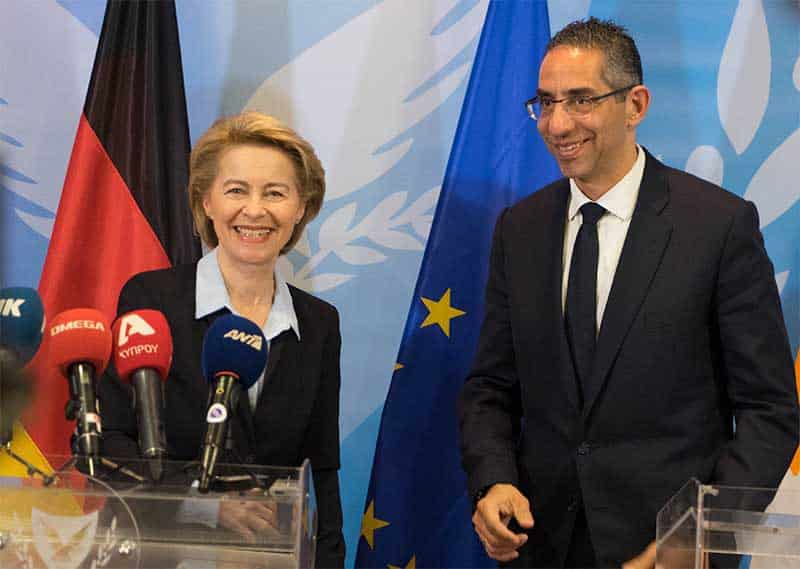 The two ministers in Nicosia on Tuesday

Cyprus aspires to see the Eastern Mediterranean transformed from an area of instability and geopolitical uncertainty into a region of stability and prosperity, Defence Minister Savvas Angelides said on Tuesday.

Speaking after talks with Germany’s Federal Minister of Defence, Ursula von der Leyen, in Nicosia on an official visit, Angelides said the latest international developments and geopolitical changes in the wider region have created a political situation that is particularly unpredictable and fluid, making the security environment more complex.

The two countries agreed on Tuesday to enhance their cooperation concerning projects in the framework of the EU’s Permanent Structured Cooperation (Pesco). The ministers underlined their willingness to strengthen relations in the fields of security and defence.

The German minister said that Cyprus is a valuable partner for Berlin.

Cyprus, she said, “is a very active country in Pesco” adding that both countries are participating in projects, mainly concerning military mobility and a network of logistics hubs.

“Cyprus has a unique selling point of capabilities here and a unique geostrategic location. Both of them makes it very valuable to have you as a project partner in Pesco,” von der Leyen stated.

She added that the two sides are also discussing other geostrategic projects in the area.

Angelides noted that von der Leyen’s visit is particularly important and takes place at a very crucial period for Cyprus and the wider region.

“Taking particularly into account that conditions of stability, growth and prosperity in the wider region are directly linked to the security of the member states of the EU itself, Cyprus is choosing to be actively present in this new security and defence architecture of Europe,” Angelides said.

On Monday, Angelides said efforts to upgrade relations with European countries in the field of security are part of aspirations to become “a pillar of stability in the region.”

He said an agreement with France for it to use Cyprus’ naval base in Mari does not provide for setting up bases on the island but for upgrading of existing infrastructure.

Angelides added that Cyprus’ defence agreements with other EU countries have to do with the security of Europe and not aggression against anyone.

Asked to comment on this apparent security trifecta, Alex Thomson, a former analyst with GCHQ, told the Cyprus Mail: “Despite appearances, I don’t regard this German overture to Cyprus as being primarily in competition with the long-term British and recently surging French military relationship with the island. In fact, it is all of a piece with Cyprus’ other defence relationships. The German-Cypriot angle is now being added because there is a legal necessity for the emerging EU Defence Union structures to be anchored bilaterally between all participating states in order to remain incontestably valid (in governments’ estimation) after whatever Brexit we end up getting.

“The Anglo-Franco-German triangle of bilateral long-term defence integration treaties has now been closed on all sides, with the secretive 2010 Lancaster House accords and the 2018 Sandhurst Treaties between the British and French Ministries of Defence, brokered by that shady ‘charity’, the Franco-British Council; the 2018 British-German Joint Vision Statement between the respective Ministries of Defence; and now the 2019 Aachen Treaty between France and Germany.

“All these triplicated bilateral treaties envisage the parties to them integrating increasingly to form a single military entity over time, and inevitably this will necessitate a single European tax base, from which the main profit will be enjoyed in Manhattan- and City-based munitions manufacturers.”
He added: “Therefore, Cyprus has not in effect made separate defence agreements with Johnny-come-lately France and Germany. Rather, France and Germany – seemingly at the ultimate behest of the City of London – have now partnered with Britain’s existing invaluable Cypriot base to allow the projection into the Middle East of the nascent unified European air power, sea power and signals intelligence capacity which Britain has been operating heretofore for itself and its Commonwealth and US allies.

“Strikingly, although former directors of both MI5 and MI6 have gone public with their warnings that the EU defence union will lead inexorably to the demise of the Five Eyes relationship in signals intelligence, the leadership of GCHQ, Britain’s signals intelligence agency and the actual partner to the Five Eyes which runs the collection bases on Cyprus, has not issued a squeak about the irreconcilability of the EU Defence Union agenda with the post-war basis of English-speaking nations’ intelligence integration.”

Furore breaks out over Paphians are ‘true Turks’ comment

No matter how many tests we perform, the virus will keep spreading